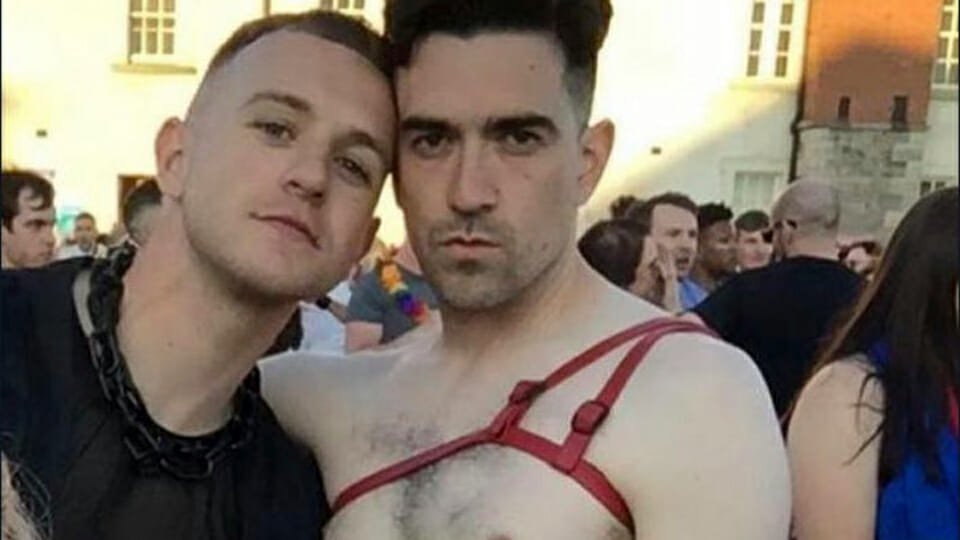 To be honest, after four abortive attempts at an opening paragraph for this story, and given the subject matter, it’s probably best to skip all the messing around and get right into the action:

A confession: when Senator Warfield (that’s him on the right in the photo) sent that tweet on Friday, my fear was that it would be old news by Monday. We don’t generally publish new stuff on the weekend, and so it seemed likely to my naïve mind that the Sunday Papers would probably kick the stuffing out of him for it and we’d be left with the scrapings of the plate here for Monday.

Anyway, to the, ahem, substance of the matter.

What’s interesting isn’t necessarily the tweet itself, which is the kind of absurd-attention seeking nonsense that the Senator is increasingly well known for, but the supplementary content. The link he’s sharing there is to advice from HIV Ireland, a state-funded body whose Patron is no less a man than the first citizen himself, President Higgins. And what’s their advice during the height of the Coronavirus Crisis? Let’s take a look:

“While COVID-19 is not sexually transmitted, sex itself is a contact sport. Touching, kissing and manoeuvring in your favourite sexual positions are ways to pass on the coronavirus. In addition, we are all being asked to maintain social distancing – keeping at least 2 meters (6ft) away from each other, making any kind of sex difficult.

If you continue to hook-up, consider reducing the number of guys you have sex with. Remember that while you might think that COVID-19 is not much of a risk to you, it may be a much bigger risk to the health of the people you have sex with and anyone you and those sexual partners come into contact with.”

But there’s worse to come:

“We all have a role in doing what we can in reducing the impact of COVID-19 and when it comes to sex and sexual health the best thing we can do, and remember we are only suggesting it in the context of this unique circumstance, is to consider a break from hooking-up. That said, we acknowledge that not all of us will be able or want to do so. In that situation consider all of the harm reduction tips above.”

Read that sentence in bold again, because to be honest, I had to read it about six times before I could believe it.

Is there any other field of life – any at all – where the State would advise people that it’s okay to keep doing something during the crisis because you don’t want to stop?

Imagine if the advice to GAA clubs from the Government was: “We need you all to close and stop training and matches, but if you don’t want to please play safely”. The entirety of the media would be administering a god-awful kicking to whoever issued that advice – and it would be entirely well deserved.

But back to Senator Pornfield and his own recommendation.

And to be frank: We may all be human, and we may all have biological urges, but why is it only the one urge that we’re being told that we can’t control, or must satisfy? What about the urge just to talk to someone? Or the urge to go for a walk, or to the pub? There was at least one tragic case in the past week of somebody taking their life out of apparent loneliness during the crisis.

There’s more to life than sex, lads. Honestly, Eamon Ryan’s advice that we all grow salads on our south-facing windows doesn’t look so bad by comparison now, does it?