ON THIS DAY: 1 SEPTEMBER 1914: Death of Martha, the last passenger pigeon 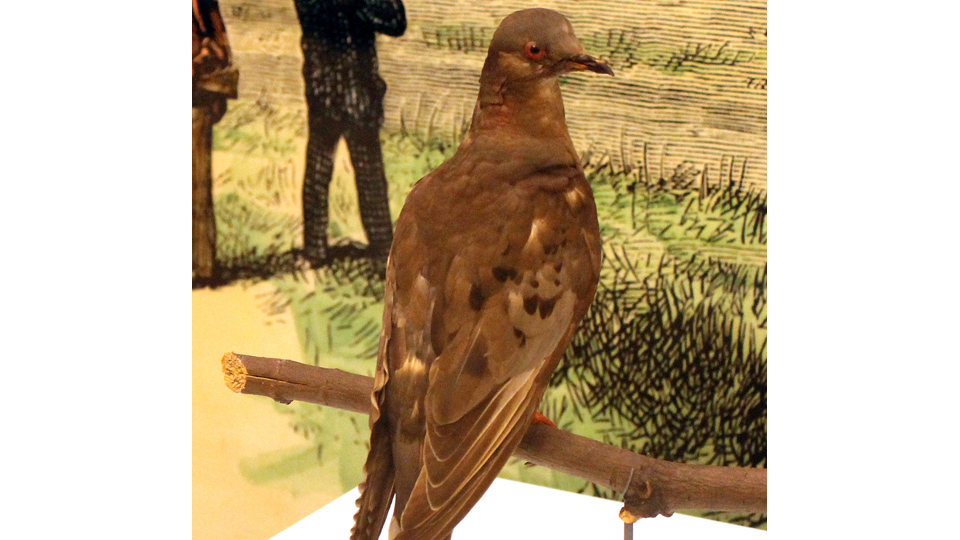 Martha, the last passenger pigeon, died on this day, September 1st, 1914. With her death, her kind became extinct.

The passenger pigeon was driven to extinction by humans, and because they were so easy to catch. As recently as 1850, there were almost a million pigeons in North America. But the passenger pigeon was tasty, and their habit of roosting in huge colonies, and their awkward flight, made them very easy to hunt as a cheap source of food. The birds flew so closely together that in one instance, sixteen were killed with a single blast from a shotgun.

By the time the risk of extinction became clear, it was too late to save them. Reflecting on it in 1910, the naturalist Charles Day wrote:

“One foggy day in October 1884, at 5 a.m. I looked out of my bedroom window, and as I looked six wild pigeons flew down and perched on the dead branches of a tall poplar tree that stood about one hundred feet away. As I gazed at them in delight, feeling as though old friends had come back, they quickly darted away and disappeared in the fog, the last I ever saw of any of these birds in this vicinity.”

The last recorded wild nest and egg in the wild were found in Minnesota, in 1895. A live bird was spotted in 1896, but it was shot. Another was found in 1901, and this too, was shot and stuffed. From then on, the only living birds were in captivity – but they did not thrive there, and did not breed well.

Martha was the last of them. She was named after America’s first first lady, Martha Washington. She lived at the Cinncinati zoo from 1877 to her death, but never had any chicks. In 1909, her last male companion died, and she became the last known passenger pigeon. By that time, she had suffered a stroke, and could no longer fly. But she was still a massive tourist attraction, with thousands coming to see the last of a bird that was once ubiquitous across North America.

On the morning of September 1st, 1914, she was found dead in her cage, and the passenger pigeon was extinct. She was 29 years old at the time of her death.

She is still a tourist attraction today, though, in the American Museum of Natural history, where she sits, preserved, on her branch, a lonely echo of a bird whose call was once heard everywhere in North America.

Martha, the last passenger pigeon, who died on this day, one hundred and six years ago.