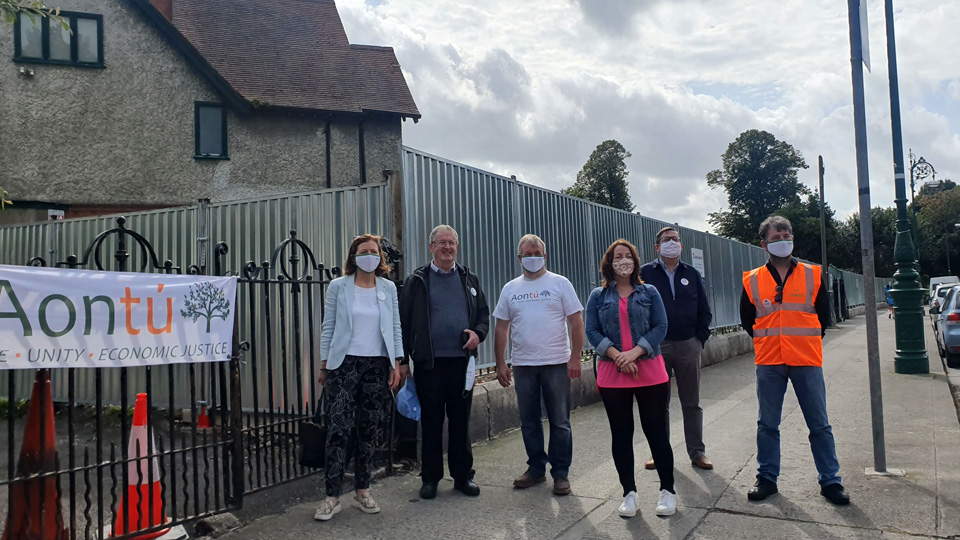 Meath West TD Peadar Tóibín has condemned the inaction by the government in relation to the demolishing of the home of the Irish 1916 hero, The O’Rahilly. Aontú held a protest at the site at 40 Herbert Park on Saturday, which was the home of Michael Joseph O’Rahilly, the only leader of the 1916 Rising to die in battle.

Deputy Tóibín described the O’Rahilly home as  a National Monument, saying it was a matter of national importance that a preservation order be sought to ensure the house was preserved.

Liam Coughlan of Aontú Dublin South said that the O’Rahilly home was a meeting place for the leaders and organisers of the 1916 Rising and subsequent events of national significance. “The World War was fought in the fields of France, they were anonymous fields where hundreds of thousands were killed, but Dublin is the one rising where the streets are the same today, you can see where leaders lived and where events were planned, and that should be preserved. It’s a very important part of our history.”

Local man, Noel McDonagh said that the house was situated in an area of historical importance, close to Northumberland Road and where the Battle of Mount Street had been fought in 1916. “This area should be an historical quarter with walking tours,” he said, “instead of tearing the house down for apartments. It’s a real shame.”

Peadar Tóibín said he had spoken to both the senior Minister and the Junior Minister today seeking the that they as a matter of urgency intervene and protect the National Monument at 40 Herbert Park, Dublin by Preservation Order as a monument the preservation of which is a matter of National importance”.

“This comes on the back of an Bord Planála granting permission to the developers to demolish this really important building. The home of this revolutionary hero should be a national monument, a commemoration to the bravery and actions of a man who gave his life in the fight for Irish freedom. This house is where the Asgard gunrunning was organised. It was the location of numerous meetings in preparation of the Easter Rising and Cumann na mBan was founded here.

“The Ministers of this government occupy Ministerial Office due in large part to the actions of heroes such as The O’Rahilly. Those same Ministers must intervene immediately and without delay to ensure that the home of an Irish legend is not demolished,” he said.

“There is a continuing battle in this country between the greasy till and the heritage of Ireland. Moore St is another example of this battle. Shockingly governments over the last 15 years have refused side with our heritage. They seem to understand the value of nothing. Its is cultural vandalism to see the demolishing of these irreplaceable monuments to the revolutionaries to fought and died for our freedom.

“This government must intervene now and protect this building before its too late,” he said.

Burglaries down, domestic violence up in Covid-19 pandemic

Report: Liam Coughlan of Aontú says the council should be helping to provide homes for people to buy