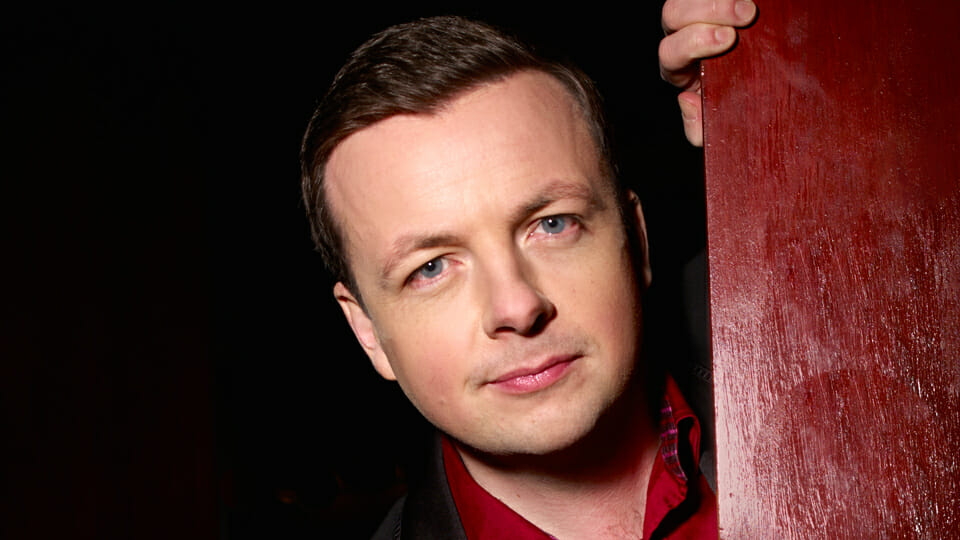 I don’t know Oliver Callan from Adam, and we’d probably disagree on many things, but he is a genuinely funny comedian. His political sketches are hilarious, and he’s a brilliant mimic, effortlessly taking off everyone from Mary-Lou McDonald to Brian Johnson and Leo Varadkar.

Last week, however, he learned that criticising Leo Varadkar during a pandemic will attract significant opprobrium on social media, though much of the outrage has more than a whiff of being manufactured.

The Taoiseach was on the Late Late Show to talk about plans to ease the Covid-19 restrictions. It’s worth noting that Varadkar hadn’t attended a press conference to take questions as, according to Simon Harris, he preferred to address the nation via a chat with Ryan Tubridy.

“The Robot has addressed the nation. Never before has anyone spoken so woodenly. So slowly. And. Said. So little. He tried to smile and do the empathy thing, it did not go well. The autocue fought the robot, and won. #Leovaradkar,” he tweeted.

BREAKING: The Robot has addressed the nation. Never before has anyone spoken so woodenly. So slowly. And. Said. So little. He tried to smile and do the empathy thing, it did not go well. The autocue fought the robot, and won. #Leovaradkar 🤖

It wasn’t long before the tweets were flying. Fine Gael, who seemed to have learned a thing or two from the Shinners, now have much greater numbers of people ready to leap to their defence on social media.

Callan was nasty, and mean, and a bully, they said, before calling him a “piece of shit”. Plus, he wasn’t funny – even though the tweet was liked more than 4,000 times.  Even worse, he was letting down the side by having a go at Leo during a national crisis, when everyone knows that the best response to everything that happens, good bad or indifferent, is to say the Taoiseach or Simon Harris look so tired, bless them, and are doing their best. Anyone raising awkward questions is being negative and letting the side down, and someone needs to shut them up fast.

The Irish Times were on the job, thundering that “Cheap, personal shots at politicians demean everyone involved” and in full finger-wagging mode said Callan ‘ought to know better’. (The author seems to have forgotten that one of her recent columns was headlined ‘Killian Foley-Walsh should shut up and listen.”)

Clearly, Ryan Tubridy got the memo, as has everyone in RTÉ before him. Over the course of a thirty minute interview, Tubridy said that the fatalities in nursing homes were ‘grim, and desperately sad’ before asking Varadkar if he thought the government had let those residents down. Varadkar replied by saying that from the start nursing homes were always on the agenda, which clearly was not the case. The Taoiseach wasn’t pressed on this subject, but was invited instead to send “a message” to people in nursing homes.

Here’s where I part company with Callan. The problem with Varadkar’s response isn’t that it was wooden, it’s that it was evasive and dishonest. Tubridy, like practically every single interviewer in RTE since this crisis has begun, failed to hold Varadkar or his caretaker government to account.

The media have simply become mouthpieces for the regime. Current affairs programmes like Prime Time are now just soapboxes for Simon Harris to tell the nation what he’d like them to hear. There are no challenging questions, no one is pointing out the obvious, in particular in relation to the fatal errors the government made in relation to caring for those most at threat from Covid-19: elderly people in residential care.

We’ve written extensively about this on Gript , from March 10th, when John Mc Guirk first called out the “madness” of the government intervening to lift a ban on visits to nursing homes. But there have been plenty of other errors, and amongst the six most fatal of those errors was the incompetent and downright careless handling of the very obvious needs of nursing homes. Now more than half of all deaths from the coronavirus are from older people in these homes. Yet, most of the media are still singing from the government’s hymn sheet.

Certainly, Varadkar didn’t seem to have given much thought to what was best for older people even at this point, nine weeks into the crisis. He seemed surprised to be asked if it might be better for people in nursing homes who had not contracted the virus to stay with their families, even though Dr Marcus de Brún, who has resigned from the Medical Council in protest at the government’s failures regarding nursing homes, has said that leaving covid-free residents in nursing homes is tantamount to “state-sanctioned euthanasia“.

“Have you any regrets? Tubridy asked the Taoiseach on the Late Late. Varadkar pauses and then says that nothing ever done in politics or life is 100% perfect. He then makes some noises about stockpiling ventilators and protective equipment.

End of another 30 minute RTÉ interview without any hard questions being asked of the leader of the government. No wonder Simon Harris has the gall to say that his government has made “no mistakes” in the handling of this pandemic. No wonder they’re this arrogant. Most of the media – including the taxpayer-funded media in Montrose – have let them off scott-free.  The effect is to shut down debate, to pretend that everything is super.

It appears critical thinking is also on lockdown during the pandemic.

Callan said there were 1200 replies to his tweet, but that he didn’t read them. He made the fair point that the Taoiseach “is earning €207,000 +exp to do his job” and said “I think Leo Varadkar is fair game.” Whether you think Callan is funny or not isn’t the point, he is correct when he says that in a democracy he has the right to be critical and to hold power to account.

The media makes a bogeyman of Trump, while the real fascists run concentration camps in China