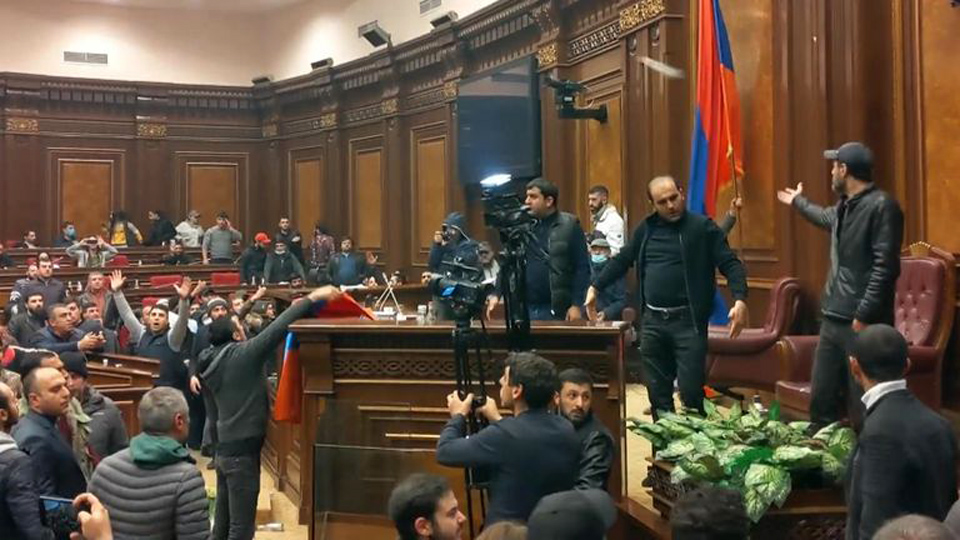 Following six weeks of intense fighting between Azerbaijan and Armenia, a cease-fire brokered by Russia will see territory formerly controlled by Armenia handed over to Azerbaijan.

As Armenians begin to leave parts of the Nagorno-Karabakh region, retreating to within the new borders of their country, they have also had to say goodbye to their churches and homes.

These are some of the moments captured on camera as communities flee the area:

🇦🇲 The Armenians say farewell to their centuries-old churches which will be left to Azerbaijan tonight from midnight.

We abandoned our Christian brothers.pic.twitter.com/1COYNnbdv4

Armenians are burning their own homes as the clock ticks down to a handover of territory to Azerbaijan under a Russia-brokered peace deal that followed six weeks of fighting over the enclave of Nagorno-Karabakh and surrounding areas https://t.co/Qp3sTz3SwB pic.twitter.com/EvHkwk2oAM

Azerbaijan has condemned Armenians who have decided to burn their homes as they leave, calling it “ecological terror”.

Azerbaijani President Ilham Aliyev has promised not to destroy Christian churches, telling Russian president Vladimir Putin that Christians of Azerbaijan “will still have access”, but footage emerging from the region has already shown soldiers desecrating cultural icons and celebrating on church rooftops:

Azeri/Turkish Soldiers destroying armenian cultural heritage in Artsakh (karabakh).
What guarantees do we have that the same will not happen to Armenian churches, castles, and monuments in the areas that will come under the control of the azerbaijani government? @UNESCO pic.twitter.com/XFA8XHcJFt

On Sunday, the Armenian government condemned the vandalism that occurred in a cathedral in the city of Shusha after Azerbaijani soldiers took the area.

The much-disputed Nagorno-Karabakh region, where fighting has raged recently, was controlled by Azerbaijan before the collapse of the Soviet Union, with some 30,000 people then dying in a war that saw Armenia take control of the mountainous area in 1994.

The cease-fire agreement will see parts of the Nagorno-Karabakh region which Azerbaijani forces took control of in the latest fighting remain under their control, prompting a mass exodus of Armenians from those towns.

Severe weather and hazardous roads has meant the withdrawal agreement date for Armenians from the Kalbajar area has been extended to November 25th.

The agreement brokered by the two countries has been condemned by large numbers of Armenians, with some storming the parliament in the capital Yerevan to express their anger towards the current government.

An estimated 4,000 people have died in the recent conflict between the two countries, with many more people reportedly the victims of this cruel war:

The war crimes of the Azerbaijani army in Nagorno Karabakh are emerging. Azerbaijani soldiers cut off the ears of a civilian who refused to move out of the house and go to Armenia. pic.twitter.com/TsOCSly3aI