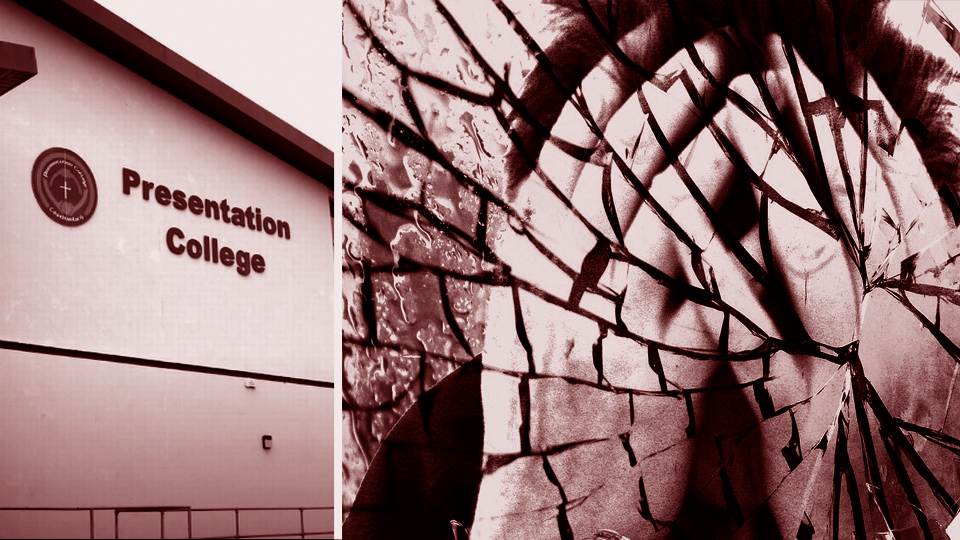 Note: Gript’s usual editorial practice is to require two separate and independent sources for anything that we report as factual. In this case, there is only one source for this story, because staff members in Presentation College have been advised not to speak to the media.

We think it is fair to report the information in this report, but we also think that it is important to tell you, the readers, that it comes from a single source, albeit one with first-hand knowledge of the situation.

We would also point out that a single source with first hand knowledge of the situation is one more source than has been cited in most of the disgraceful coverage by other media outlets this week.

On Tuesday morning of this week, Presentation College Carlow was just a normal, medium sized, provincial school like any other, unaccustomed to national publicity. By Tuesday evening, it was being denounced in national media outlets as an institution which is unsafe for your daughters – one where wretched, leering, male teachers were so interested in eyeing up young girls that they could not concentrate on their work, and where the girls had to be told to cover up their bodies so as to avoid turning themselves into a sexual distraction for the men.

This story went everywhere. It was based, we now know, on a single facebook post that had been shared by a woman called Sandra Haughney four days earlier. Here is the original post:

The claim in the post is explosive: That female students were told, explicitly, that their leggings were distracting the male teachers.

The problem is, according to our source, that the claim is flatly untrue.

Gript finally managed, in the past 24 hours, to speak to a staff member of Presentation College who is familiar with the situation. Staff members, it will not surprise you to learn, have been advised not to talk to journalists, and people in the school are reluctant to talk, and generally (and for good reason) have little trust in the media’s ability to report this story fairly.

Last week, students in Presentation College were, indeed, reminded of the school’s uniform code. The language that was used – in one instance only – was that “teachers were being driven to distraction reminding you” of the uniform code.

Through a variation of what was described to Gript as “Chinese Whispers”, this became, in the hands of an excitable parent, and journalists eager to tell a story about men oppressing women, a tale about men being distracted by young girls.

“It’s been absolutely devastating for everyone in the school”, our source told us. “This is a small community, and the fact that the PE teachers were named in the facebook post as having dirty thoughts about young girls is devastating for them, and for their colleagues”

“The problem is that the suspicion doesn’t go away. The lie is halfway around the world before the truth gets its laces tied”

“But even if they think they have a point on that, it’s a very different issue, and a very different complaint, compared to saying that (PE teacher) and the rest of us are perverts who can’t keep our eyes off their arses”.

“That’s just not true. It’s a disgusting lie. What they were told was that we are all driven to distraction reminding them of the uniform rules. And that’s absolutely true. The rest is bullshit.”

In recent days, almost every media outlet who reported the original claim have backed off it. You won’t now find a journalist in Ireland who is willing to report as fact that girls were told that their clothing was distracting male teachers. Because it’s not true.

It is worth recalling that this specific allegation was printed, and broadcast, in too many national news outlets to recite here. The Irish Examiner, the Journal, Newstalk, Today FM, and countless others repeated the claim as fact.

The primary source of the claim, for national media outlets, was journalist Kacey O’Riordan, who is, as she herself notes, an “award winning” reporter:

Female students at a Carlow secondary school have been told by teachers not to wear tight-fitting clothing to PE, as it is distracting for male staff.

Note well that, in Ms. O’Riordan’s report, no witness is cited. The sourcing for all her original reporting is from “parents” – none of whom were in the assembly when the alleged comments were made. Even at the very beginning, this was a second hand story, sourced from people who had witnessed nothing. It is shameful journalism, and it is notable that those media outlets with genuinely strong editorial processes – for example, The Irish Times – did not repeat or pick up on the claims. But they were in a minority.

The person who spoke to Gript was unable to confirm whether staff members in the school are considering legal action against Ms. O’Riordan, but expressed hope that they would, as well as what they described as “anger” and “disillusionment” with the media.

“We’re just teachers. We’re all fairly middle of the road people, but we’ve spent the whole year listening to a constant barrage of comment on the radio and in print that we are lazy and workshy and all the rest of it. And now this woman comes down out of nowhere and decides to tell the country that we’re paedophiles as well? You’d start to wonder – if this is the way they report on us, how can you trust what they say about anyone else?”

“What they said about us was just lies. There’s no other word for it”.