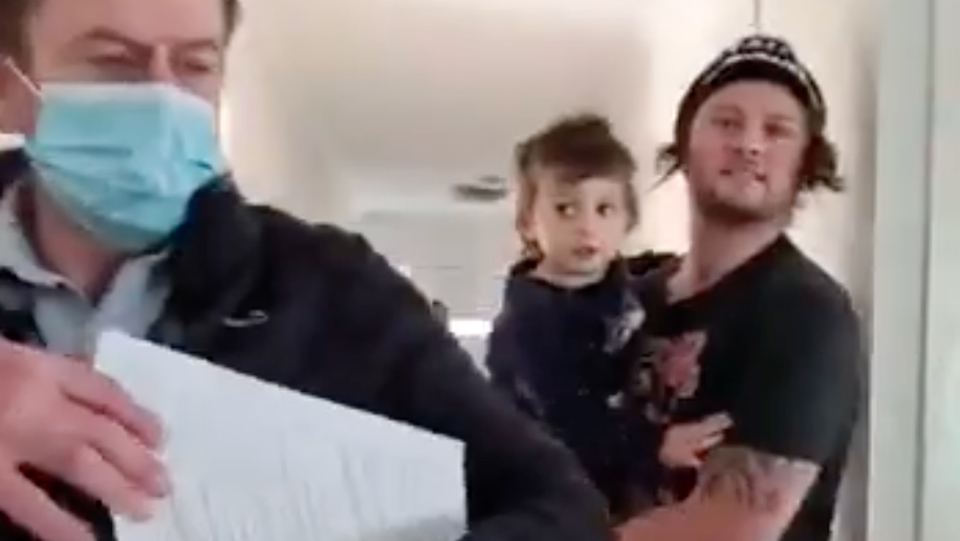 The arrest of a pregnant woman in her home in front of her children for posting an anti-lockdown event has caused outrage in Australia and abroad.

Zoe Buhler, a 28 year old resident of Ballarat, Victoria was preparing to go for an ultrasound when masked police officers entered her home and said they were arresting her for “incitement” under emergency lockdown laws.

The young mum was handcuffed in her pyjamas while crying and in visible distress. The shocking arrest was caught on camera by the woman’s boyfriend.

“Excuse me, incitement for what, what on Earth? I’m in my pyjamas, my two kids are here,’ she said, explaining that she had an ultrasound in an hour because she was pregnant.

Police said that Ms Buhler had posted an alleged offending post on Facebook bringing attention to a “lockdown protest” and that this was incitement.

The increasingly distressed mother said she believed she wasn’t breaking any laws by promoting the event, but the police insisted that she had already committed a crime.  “Can’t you just say to her to take the post down? ” Ms Buhler’s boyfriend, James Timmins is heard asking as he held their baby boy in his arms.

“This is a lot of stress on her, come on she’s pregnant,” Mr Timmins protested as Ms Buhler became more and more upset and broke down in tears. “It’s not like she has done the event, she can take down the post,” he said. “This is very unfair.”

The police officers then said they were seizing any electrical devices in the house and took Mr Timmins phone, preventing any further filming.

Commentator and presenter Rowan Dean with Sky News Australia described what happened as a “national day of shame”.

He told Sky’s Andrew Bolt that people were horrified and outraged at what had happened. Arresting a pregnant woman for “merely putting her opinions on line” was an abuse of rights, he said, and called on the government to step in and protect the constitutional rights of its citizens.

Andrew Bolt said that the sweeping powers given to police for the lockdown were an affront to freedom.

Sky News host Rowan Dean says this is a “national day of shame” and Victoria stands condemned in the eyes of the world after a pregnant woman was arrested for ‘incitement’ after an anti-lockdown Facebook post.More: https://bit.ly/2QT7VQp

The link to the Facebook event was shared by news media journalists in Australia.

This is the alleged Facebook post Zoe Buhler shared that may have led to her arrest, all captured on a Facebook livestream.@VictoriaPolice have told @YahooNewsAU they were prepared to arrest others involved in breaching the @VictorianCHO's directions.#6NewsAU #COVID19Vic pic.twitter.com/6Rnqj48fis

There was widespread condemnation of the treatment of Ms Buhler

@RitaPanahi Can anyone provide the name of this woman and the details of the case? If it is as presented, then I cannot see how any law-governed society can tolerate it. Where are the Human Rights people? https://t.co/vpQTDXiwPW

I hope you're happy. They pretend the emergency powers are to quarantine sick people. Then they arrest pregnant women for Facebook posts. Is this North Korea now?https://t.co/KHMjK8cfLc