‘Ushered dying’ will be a hell on earth for some 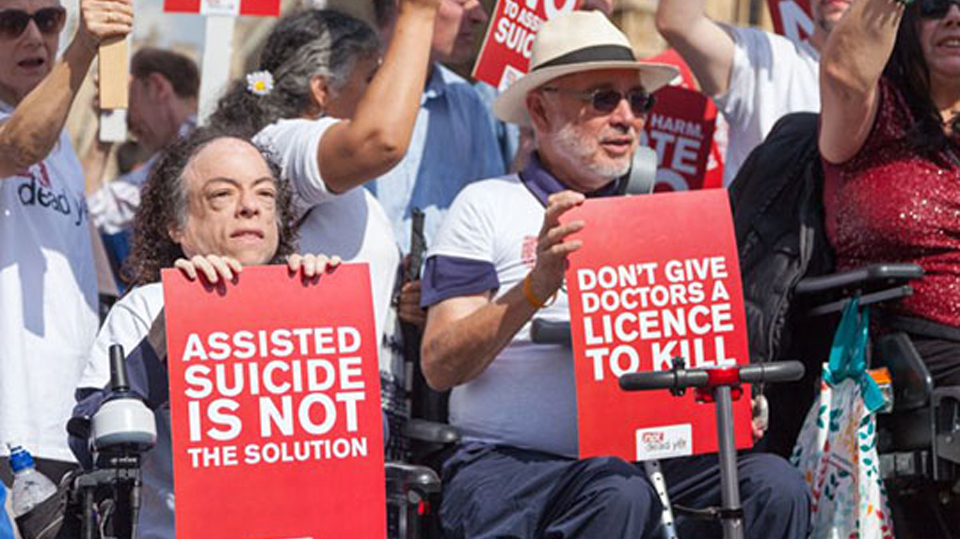 Suicide is a problem in Ireland. It is one not often spoken of. It is rarely reported in explicit terms that someone has died of suicide, but we learn to read between the lines in the news reports.

It is one issue where this is no divide between left and right, progressive or conservative. Everyone agrees that something should be done about it and that each case of suicide is a tragedy. Most believe that many cases of suicide are avoidable. There are government supports in place with social workers, psychologists and therapists, working to help people find a way out of the darkness.

There are multiple charities that aim to prevent but also support the bereaved who have lost those close to them in suicide. There is much talk, again inarticulate, about the impact of the coronavirus restrictions on the economy – and the subsequent correlation between economic contraction and increasing rates of suicide. There are challenges for charities to reach out to many needing their support due to the virus, and critics say that the government does not do enough to address the problem.

However, many of the same people are now advocating for a bill that will enable and facilitate suicide – euphemised as assisted dying. This requires the greatest of cognitive dissonance.

No longer is suicide a tragedy. It is to be supported and enabled as a ‘right’. This is not just suicide. Suicide is already an available option. The law that is proposed is one of assisted suicide. While one person, dying alone, no longer able to find the courage or the will to continue living is a tragedy, the government and many advocates see the same thing as welcome when embalmed in the language of rights, when accompanied by the helping hand of a doctor or a close family relative.

The argument is, however, that these suicides are different. These are rational decisions, made by people who have decided in full clear thought that they want their life to end early because they are facing into considerable suffering, or have an incurable illness. Often this is the case, but the underlying assumption by advocates is that this decision is rational while tragic suicides are not. The assumption is that knowing that you are going to die of a particular cause within a particularly limited timeframe in a particular manner which you wish to avoid is a rational decision, taken with full autonomy, objectively and with full foresight of the remaining time on earth that is wished to be avoided.

The corollary is that other types of suicides are not made with such lucid clarity. Other suicides do not have the same dignity in dying that euthanasia activists are calling for. But there is no clear dividing line. That dividing line is a grey fuzzy area that none of us can really understand. Which is why wherever euthanasia has been introduced it expands and broadens. Those objective cases that are presented as clear-cut are very proximate to other cases that are not quite as clear cut but there is no objective reason why one person’s desire for dying with dignity trumps another’s whose case is tragic, heart-wrenching but just not quite as bad. They won’t die quite as soon maybe. Or they won’t die with quite as much pain. Or they won’t be quite as incapacitated. But each hard case is right beside a nearly-as-hard case. And who is to say that case is not a rational decision also?

Is it the slippery slope? The thin end of the wedge? Experience shows that it is. You don’t have to look hard to see how euthanasia has expanded in the Netherlands. Only wilful denial of reality refuses to admit that how Professor Theo Boer in the Irish Independent sets out the experience of the Netherlands for all to see.  He says he was “convinced the Dutch had found the proper balance between compassion, respect for human life, and respect for individual liberties” but the reality has shown the evolution to be something different. The numbers seeking euthanasia jumped from 2,000 to over 6,000 in 15 years. Those committing suicide outside of the ‘system’ increased as well, in contrast to neighbouring countries who did not introduce euthanasia. Suicide became normalised. And those seeking euthanasia were not just those suffering terminal illnesses. In Belgium in 2013, twins who were born deaf chose euthanasia when they found they were going blind. There was the horrific case where a woman in her 80’s woke up when she was being euthanised and the doctor had to ask her family to hold her down as she rejected the ‘treatment’.

Gino Kenny said his proposed Bill which was introduced to that Dail last week would allow people to control their own death when they decide their suffering is unbearable. He said there were adequate safeguards; the person must have capacity, and two doctors would have to verify the terminal illness. This is not the case in this particular bill, but experience has shown that no amount of safeguards stem the tide or hold back advocates for just a little more suicide. Irish euthanasia campaigner Gail O’Rourke, on the Hard Shoulder on Newstalk (September 20th),  was honest in that she thought the Bill was too restrictive, but that it needs to be restrictive so that they can get their foot in the door.

Of course, she is not the government and she doesn’t make the laws. Minister for Justice, Helen McEntee voiced no principled objection to assisted suicide. Her main concern was with ‘safeguards’. The idea of some sort of ‘Irish exceptionalism’ that we will resist the slippery slope/thin end of the wedge tactics that have been successful elsewhere is either delusional or dishonest. The same tired nonsense was trotted out in the abortion debates about hard cases, restrictions, while ignoring the reality of what has happened in other jurisdictions. Two years has shown all those denials to have been delusional – or dishonest.

That ‘safeguards’ can be put in place to protect the vulnerable – the aged, those with disabilities – is a nice idea but again, something not reflected in the reality where assisted suicide has been in place. The judgement in the  Marie Fleming High Court case (2013) concluded that, “even with the most rigorous systems of legislative checks and safeguards, it would be impossible to ensure that the aged, the disabled, the poor, the unwanted, the rejected, the lonely, the impulsive, the financially compromised and emotionally vulnerable would not avail of this option to avoid a sense of being a burden to their family and society”.

When we hear of a pandemic of suicides among the elderly suffering from loneliness, we think about how awful it is. And we think that something should be done to prevent it. At the same time, wilfully we ignore the surveys that many more elderly consider euthanasia for fear of being a burden to their families than from fear of the pain or imminence of death. Yet it is obvious that these become rational reasons for choosing death once euthanasia is introduced. The law influences culture and attitudes yet a blind eye is turned toward those types of suicides in this debate. Is it a question of whether they are considered to be acceptable collateral damage? Are suicides from loneliness something to be fixed but suicides that are essentially coerced by the shape of the law something to be welcomed? Safeguards are all well and good but are the Irish some sort of super-race that can overcome all the pitfalls that no other country has avoided? We are an arrogant nation if that is the case. Either delusional or dishonest.

Professor Des O’Neill sums it up succinctly and politely in The Irish Times (Sept 28th) when he says: “At the heart of the movement seems to be misperceptions of care processes and pathways, failure to recognise the drivers (and conversely corroders) of care, compassion and communication, an artificial separation of two forms of suicide into one which is undesirable and another desirable, a misinterpretation of dignity, and a vision of autonomy that has not factored in our relational nature and the impact of any individual’s actions on those around them.”

A healthcare worker friend said to me a few days ago, prompting this article: “It’s a healthcare providers responsibility to advocate for the vulnerable. We need to look at death differently. There is no loss of dignity in dying if it is a normal process and part of the human experience. We need to do better with more support in accepting hospice and pain management. There are so many factors on why someone chooses euthanasia. Financial considerations, lack of support in caring for the ill, under treatment of pain, depression or a patients lack of education leading to fear of the process, real discussions on beliefs surrounding death by providers that are unskilled at having those discussions, lack of a plan. Until we have met these challenges we haven’t done enough. For this to be a decision made using free will we need to address these issues, these factors play a role in swaying someone to choose death based on fear and sparing others of the inconveniences of death. It places the poor and those that don’t have the support at a higher risk to choose death. That isn’t a dignified death.”

These are the real issues our politicians should be looking at rather than electing for the populist and cheap opt-out. Many may be driven by a genuine concern for those at the periphery of life but they are guilty of straight-line thinking, wilfully or negligently refusing to acknowledge the impact of the proposed bill on healthcare, on society and on the lives of those who are vulnerable.  They will be internally and externally coerced into feeling like they ought to be better off dead. Rationally, lucidly, objectively, they will opt for suicide. This is the tyranny of choice that this bill advocates.

Introducing assisted suicide may promise to solve the problems of a small few, but like every utopian solution, even with the purest intentions, it will make being old, disabled or vulnerable a hell on earth for many in the name of dignity and compassion. Ironically, or maybe poignantly, this comes only months after care homes were negligently allowed to become death-traps for the old and vulnerable in the rush to solve another problem. Many of the same politicians who use their deaths as a stick to beat the government with in the coronavirus response are the same ones that are ushering in a new regime that will condemn the vulnerable in a different way. And it is important to note that while some governments, such as in Australia, have apologised for how they handled the outbreak in care homes, the Irish establishment remains resolutely silent.

Former National Review editor Frank Meyer came up with the phrase ‘don’t immanentise the eschaton’ (don’t try to create heaven on earth) when describing utopian plans to solve all the world’s ills. That phrase is never more appropriate in relation to euthanasia where such a law will very physically immanentise the personal eschaton (afterlife) for many old and vulnerable.