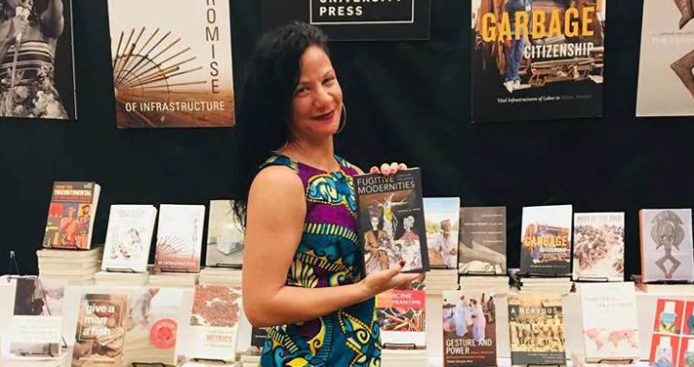 Jessica Krug, is her name, and she’s spent basically her whole adult life pretending to be a black woman when, in fact, she was just, well, overly fond of the old sun-beds.

Here’s her apology, which to be honest, is much more entertaining than the story itself:

To an escalating degree over my adult life, I have eschewed my lived experience as a white Jewish child in suburban Kansas City under various assumed identities within a Blackness that I had no right to claim: first North African Blackness, then US rooted Blackness, then Caribbean rooted Bronx Blackness. I have not only claimed these identities as my own when I had absolutely no right to do so — when doing so is the very epitome of violence, of thievery and appropriation, of the myriad ways in which non-Black people continue to use and abuse Black identities and cultures — but I have formed intimate relationships with loving, compassionate people who have trusted and cared for me when I have deserved neither trust nor caring. People have fought together with me and have fought for me, and my continued appropriation of a Black Caribbean identity is not only, in the starkest terms, wrong — unethical, immoral, anti-Black, colonial — but it means that every step I’ve taken has gaslighted those whom I love.

I believe in restorative justice, where possible, even when and where I don’t know what that means or how it could work. I believe in accountability. And I believe in cancel culture as a necessary and righteous tool for those with less structural power to wield against those with more power.

What does that mean?

If she doesn’t know what being cancelled means, well, the good news is that she’s about to find out.

Here’s what gets me though: Why does this matter? Why does it matter a damn to anybody if somebody pretends to be black, or pretends to be white? This is one of those things that simply doesn’t make any sense. We all agree, apparently, that if you are a man who wishes to be a woman, you can be one. Liberals sneer when you then ask if that means a white person can become a black person, but they also cannot ever point you to a logical reason why that is not the case. If you can be a trans-woman, then logically you can be a trans-African.

This part, though, of the (absolutely exhausting) apology stood out to me:

No white person, no non-Black person, has the right to claim proximity to or belonging in a Black community by virtue of abuse, trauma, non-acceptance, and non-belonging in a white community. The abuse within and alienation from my birth family and society are no one’s burden but my own, and mine alone to address. Black people and Black communities have no obligation to harbor the refuse of non-Black societies. I have done this. I know it is wrong and I have done this anyway.

That bit in bold, of course, is something that will get them nodding in ferocious agreement in the womans studies departments of the Universities, and in the more insane parts of social media. But couldn’t it equally be said by JK Rowling? Imagine if she’d said “women and female communities have no obligation to harbour the refuse of maleness”, or words to that effect. She’d have been shot from a cannon into the nearest active volcano.

Ultimately, here’s the point: If Jessica Krug was happier living as a black woman, why does that matter to anybody? It sure as hell doesn’t matter to me. But if we can say, as she does, that she has no right to claim an identity other than the one she was born with, then doesn’t that logically also apply to trans people?

We all have to pretend there’s some big difference, of course, to avoid annoying the screechers online and in the NGOs and the media, but most people can see that Jessica Krug was never pretending to be a black person. She was just trans-black.

Will Antifa Hand Victory to Trump?