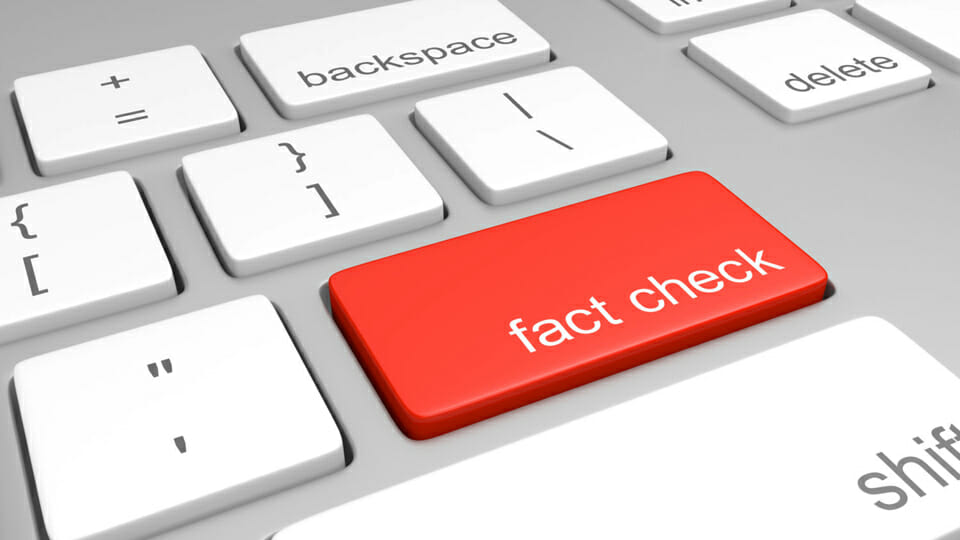 As far as we know, the idea of “fact checking” was invented a few years ago, as a way to find jobs for those annoying people you meet at a party, or down the pub who have to butt into every conversation with “well, actually….”.

Jokes aside, the concept is very simple. You take a statement by a politician, or a media outlet, you examine the facts of the matter in an objective and fair way, and you try to tell the public what the truth about the issue is. Of course, you can only really do this if you are trusted. The whole point of “fact checking” is that it’s designed to get clicks by selling the idea that you cannot trust politicians and that they are always lying to you, whereas the media, bless their socks, are honest to god hard working labourers in the garden of truth, and totally on your side.

Once you accept this version of events, you’ll take fact checks as gospel, even when they’re politically motivated nonsense, like, well, this one:

The Journal.ie decrees that the CSO numbers are right, and the world bank figures are wrong, and therefore Noel Grealish is wrong to say that €3.5billion has left the country.

There’s only one problem: The CSO figures are absolute rubbish. Look at them:

The reason they provide figures of €17m every single year, with no variance whatever, is that those numbers are – wait for it – not actually generated by counting remittances. What the CSO does, according to its own words, as quoted by the Journal.ie, is:

“When asked by TheJournal.ie how it gathered these figures, a spokesperson said the CSO “estimates worker remittances paid from Ireland as a small component of the current account of the balance of payments”, adding: “These are all transfers from Irish resident households to non-resident households.”

The spokesperson said remittance information is difficult to compile for national statistics offices and is “usually based on administrative sources and modelling rather than direct collection”.”

Second, and this is where it really gets good, is that the CSO, in arriving at its figures, looks at reported household income. In other words, it does something like this: A non-national family reports annual income of €30,000 to the revenue commissioners. The CSO then estimates a small proportion of this in remittances – we don’t know what proportion they use, but let’s imagine it’s 2% – and comes up with a remittance number of €600 for that family.

But this only takes into account reported income. It completely, and totally, ignores the impact of the black economy. If, for example, the proceeds of crime were being directed out of the country, the CSO numbers would take precisely no account of that.

In fact, and this is where TheJournal.ie’s fact check becomes totally astonishing, the CSO themselves basically admit that their numbers are a guess:

The spokesperson said remittance information is difficult to compile for national statistics offices and is “usually based on administrative sources and modelling rather than direct collection”.”

The Journal also includes this nugget, which is perhaps the best of all:

“A number of economists have also pointed out that Irish people living abroad have for decades sent money home to their families in Ireland.

Gerard Brady, Chief Economist at Ibec, noted that Irish citizens abroad have sent over €7 billion back to Ireland in the past decade alone. “

What’s the source for that €7billion figure, do you ask? Well, you won’t believe it, but the number comes from…… The World Bank. The exact same World Bank who the Journal.ie, in the same article as they quote them, say cannot be trusted.

Now, aside from the dishonesty and hypocrisy of using their data to make a point while trashing that same data to attack a point they dislike, is the Journal correct to say that there are problems with the world bank data? Yes, most certainly. The truth is that this data almost certainly overstates remittances from Ireland to Nigeria, for the simple reason that their data is an educated guess based on Ireland’s GDP. The problem is that Ireland’s GDP is vastly inflated by multinational companies channelling profits through the tax haven in Dublin, and therefore cannot be trusted. The real figure is probably much less than the World Bank estimate.

The Journal’s fact-check, though, is astonishingly dishonest, and since they are relatively smart people, one would be forgiven for concluding that it is deliberately so. It amounts to saying that they believe one guess is better than another guess, and therefore, they are correct and Grealish is a liar.

A much more objective analysis would be to say that we simply do not know how much money leaves Ireland for Nigeria every year, other than that it is somewhere between the CSO figures and the World Bank figures. That is, of course, an enormous variation, so, basically, nobody knows.

But to present the CSO figures as accurate, and the world bank figures as inaccurate, is one thing.

To present them in that way while actually quoting the same world bank figures to calculate remittances to Ireland?

That’s staggering dishonesty. These people should not be trusted to check facts. And it’s not the first time they’ve been caught at it, either.