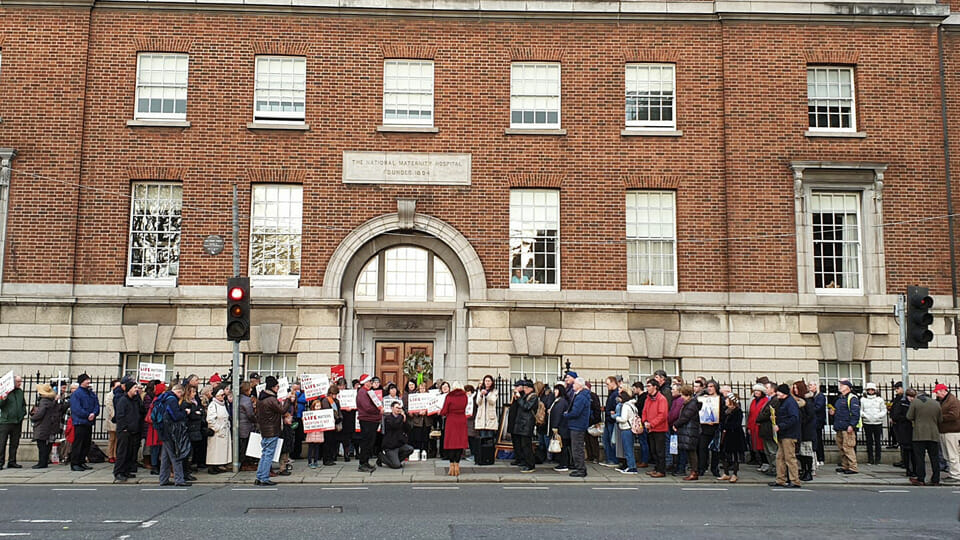 Last week, the Irish Council for Civil Liberties were excitedly tweeting that they were preparing a report for Simon Harris which could help to ban pro-life vigils at abortion centres.

Now they have reported that they have sent their “investigation” to the Minister, and issued a call for immediate action on the issue, seeking to make it a crime to offer women support or to pray at clinics or hospitals where abortions are carried out.

Clearly, one was led to believe, their investigative work would capture and detail instances of pro-life protests which were so egregious and so appalling that this ‘civil rights’ body felt compelled to request that protesters be criminalised.

It would be unimaginable, surely, for an organisation set up to defend civil liberties to seek to suspend the right to protest or to pray and hold vigil at abortion centres unless they had compelling evidence that this restriction was necessitated some dreadful actions.

The sleuths in the ICCL were undoubtedly on the case and building a  book of evidence.

Only kidding, of course.

The ICCL is a joke, albeit one that is lavishly funded by American billionaires and outside interests, so its always been obvious that their ‘investigation’ was relying on ideology rather than reality.

Those lavish funds might mean the ICCL has lots of staff to agitate in favour of shutting down the right to free expression but it can’t magic up evidence that doesn’t exist.

So there are no statements, no Garda reports, no videos, no photos to back up a call to outlaw protests.

The ICCL found nothing at all  in their “investigation” of these pro-life protests. They could offer no evidence of a pattern of harassment or intimidation at abortion centres in Ireland. They gathered no sworn statements or video evidence of the supposed badgering or obstruction of women seeking abortions.

Instead they lamely relied on a few vague newspaper reports and the hysterical denunciations of Simon Harris – the man they were sending the report to. One can only suppose they were relying on imitation being the best form of flattery.

Their report makes the following assertions:

1. Pro-life people are against abortion and therefore their vigils must be criminalised.

2. The Gardai found that there was no grounds for a ban on pro-life vigils because there was no evidence of harassment or intimidation. However, the ICCL know better, because Simon Harris said peaceful, prayerful vigils were ‘appalling’ and ‘sickening’, plus some of their best pro-abortion doctor friends told them they wanted the vigils gone.

3. Just because there is no evidence against pro-life vigils at this point, bad things have happened in other countries so Ireland should shut down the right to protest now. Crystal balls on every table in the ICCL HQ it seems.

This is the sort of stuff that authoritarian regimes rely on to curtail civil liberties. It’s unadulterated nonsense.

The ICCL’s website states that “the right to peaceful assembly and the right to protest have been priority issues for ICCL throughout its history.” That’s clearly not the case. Abortion is their priority, but their ‘investigation’ has given them nothing with which to justify this extraordinary mission failure by a supposed civil rights organisation.

The right to peaceful protest and assembly must be upheld.