In the last few days we learned that the Department of Social Protection has been busy tracking down people who have had the temerity to take a holiday while in receipt of Covid-19 welfare support – and punishing them by cutting off that payment.

104 people have had their Pandemic Unemployment Payment (PUP) stopped “as a result of checks carried out at airports”.

“The €350 PUP is paid to those who are actively seeking work. It is not paid to people who go on holidays abroad or when they are going through their 14-day quarantine period,” they said in a statement.

Here’s Leo Varadkar trying to justify the actions of his government on The Week in Politics (and as ever, not getting asked any hard questions by RTÉ).

Speaking on #rtetwip Tánaiste @LeoVaradkar says "the Department of Social Protection gets information from the airports and if somebody is not genuinely seeking work or is not living in the country anymore their welfare payments can be stopped". #rtenews pic.twitter.com/TgkVo6kdSx

He seems to suggest that anyone who takes a holiday is not “genuinely” available for work and therefore is disqualified from receiving welfare payments, and he also, bizarrely, seems to claim that taking a holiday might mean your residency is called into question.

These are the actual conditions (below) under which the PUP was payable, and let’s be reminded that it was made available because the government put the country on an unprecedented lockdown and made it impossible for people to work. (I understand there was a need for that to happen, the point I’m making is that people were suddenly unemployed due to no fault of their own). 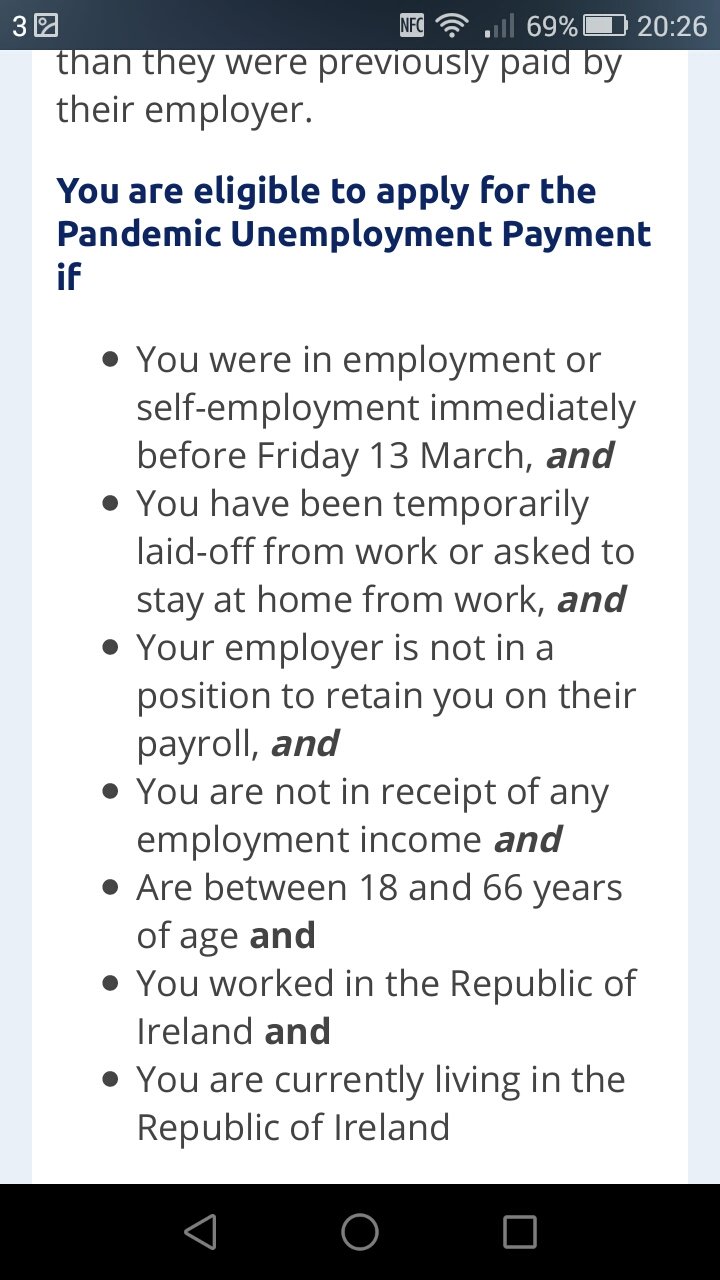 The eligibility for PUP then is that you are living in the country, were employed or self-employed and were laid off. It doesn’t mention anything about taking a holiday. There is nothing in that criteria that says someone can’t leave the country for a short period.

Neither is it clear how that criteria or the ‘advice’ – a word that doesn’t suggest compulsion – of the government about it being safer to stay at home suddenly became an iron-clad rule which, if broken, would result in the loss of your weekly income.

So much for being #inthistogether. Are we back to thinking that people on low-incomes aren’t allowed to have a holiday or, God forbid, enjoy themselves? Will we have officials carrying out spot-checks to homes to see if recipients of PUP are splashing out on Netflix or buying Magnums instead of cheap lollies from Lidl?

This kind of punching down is petty and spiteful, and also seems to be enabled by a level of surveillance that is disquieting. One caller to Liveline this week said he was stopped by the Gardai at the airport on the pretext that they were carrying out an immigration check. He wasn’t told that his PUP would be stopped until he returned home from a trip to Glasgow to see his partner, and was informed that the Department had all the particulars of his flight.

Varadkar says that the Department of Social Protection “gets information from the airports” in order to investigate holiday makers, but Dublin Airport said that they did not share any such information with any third party. How are the airports being policed then? What about GDPR rules? Is anyone going to answer these questions?

Áine Lawlor did say to the Tánaiste that it was not customary to cut people’s social welfare payments if they took a holiday. He side-stepped that by saying that those receiving job-seekers payment were allowed to take a two-week holiday. What kind of clarity did that provide? Were different rules applied to those on the PUP payment? If so why? Everyone seems to have missed the information campaign from the Department warning people that if they went abroad their PUP would be cut off.

The bottom line here is that the government seems to be saying that people on welfare can be singled out and denied the kind of holidays available to everybody else. Let’s face it, we all know no penalties will apply to working people who decide they want to go to a country on the green list for a break.

There are many thousands of people – tour operators, bar-staff, language schools staff, musicians and others amongst  them – who are relying on the Covid-19 payment, and who can’t get back to work because the government won’t let their employer re-open. It’s not as if the payment is an enormous sum, try paying your mortgage and feeding the kids and paying the bills on €350 a week, and then living in those straitened conditions for four months while facing into the prospect of a severe and lasting recession.

What if you had a holiday booked and paid for and your destination is now on the green list, meaning there is no requirement to restrict your movements or comply with quarantine according to government guidelines?  Why should different rules, or at least a different reality,  apply to you because you’ve lost your job through no fault of your own?

The whole thing smacks of Dickensian notions of “deserving” and “undeserving poor” – and the government has some terrible form in the area of portraying those on social welfare as mooching off the state. Remember the ‘welfare cheats’ campaign rolled out by Fine Gael in 2017? While the Department later admitted the wording was a poor choice, the mentality looks set for a rapid return.

It’s a mentality that is entirely absent when the government is voting to give lavish top-ups to junior ministers, raising their salaries to an eye-watering €140,000 a year. They are all “the deserving ministers” it seems, and God forbid anyone would describe their large top-ups as ‘sucking the system dry’.

We’re facing into a huge financial shock as the economic effect of the Covid lockdown hits home. The spiteful action of singling out people on welfare for punishment for taking a trip abroad doesn’t bode well for the future.

This weekend’s protest was inevitable. And Right.