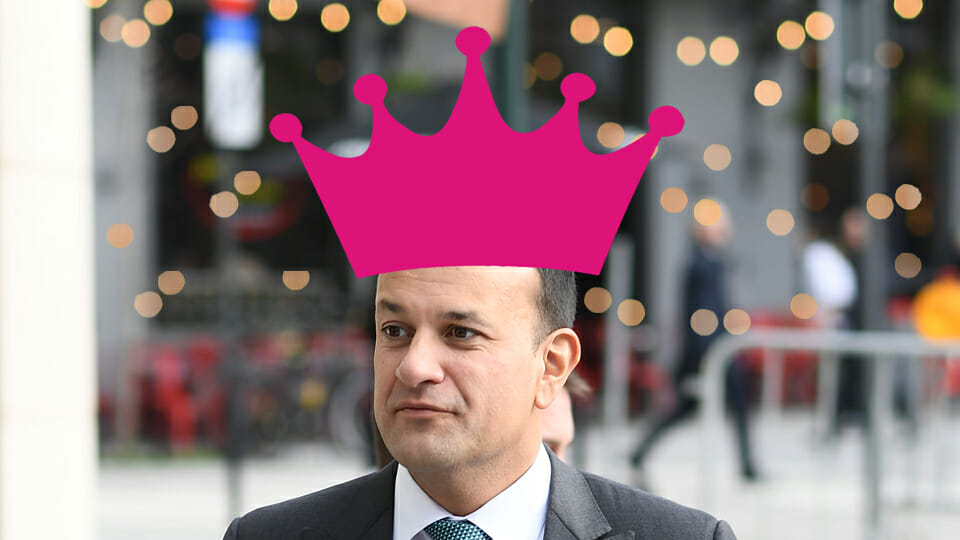 Leo Varadkar, or so the polls tell us, is the darling of the nation. He saved us all from Covid and can do no wrong.  Polls show that 88% of Irish people believe the government did a good job of handling the Covid crisis – while an almost unprecedented 72% expressed satisfication with the government.

This result puts government satisfaction a staggering 50 points ahead of what Fine Gael actually achieved in votes in Election 2020. The only puzzle is why Leo is not rushing to capitalise on these numbers by calling a general election.

What a difference a global pandemic makes, you might think. But it’s not that simple.

In my opinion, the government did not do a good job of handling the crisis, partly because they never seem to have the imagination or the courage to think outside the box, but also because they are, as has been shown repeatedly over the years, absolutely incapable of making anything but a mess of the health service.

So, even though it was obvious from the outset that older people were most at risk from the virus, nursing homes were ordered to open for visitors after they had closed due to Covid fears, and were then left without staff or PPE even as the coronavirus raged through the centres, eventually killing more than 1,000 vulnerable people, who died in heartbreaking circumstances without their families, before being buried without a proper funeral.

Nursing Homes Ireland said they needed to chase Simon Harris for weeks even “as this crisis escalates hour-by-hour, day-by-day”. This neglect was largely under-reported by the media.

Frontline staff weren’t treated much better, with nurses reduced to taking to social media to ask the public to send in protective clothing.

This week, the General secretary of the Irish Nurses and Midwives Organisation (INMO) Phil Ní Sheaghdha told an Oireachtas Covid-19 committee that Ireland had ‘the highest rate of infection from coronavirus of all health workers globally’. She described the figures as “an absolute scandal”, and said the government’s failure to provide personal protective equipment was a significant issue in the infection rate. She added that of the 8,000 healthcare workers who had been infected, some 1600 nurses were still out sick.

So those most at risk – elderly people and frontline workers – were massively let down or abandoned by the government. In regard to nursing homes, those failures amounted to criminal negligence in my view.

But Mr Varadkar and his Cabinet are largely getting away with their folly because of the extraordinary obsequiousness and servility shown to them by the Irish media – and there may be a very obvious reason for that.

Since the lockdown began, the role of most of the media has been reduced to dutifully reporting government spin from carefully managed press conferences. When one young journalist broke ranks to repeatedly press Dr Tony Holohan and the NPHET on the death of Sally Maaz in Mayo University Hospital, at one of the regular press conferences on Covid-19, her mic was turned off. Astonishingly, the other journalists didn’t object and later joined the Fine Gael bots online in slamming Jemima Burke for her persistence at the press event.

Instead of hard questions, political leaders like Vardakar and Harris have been offered soft interviews on platforms like Prime Time and RTÉ – which they’ve naturally used to tell us all what a great job they’ve been doing.

This headline from the Irish Sun sums up the media response to those staged propaganda pieces. 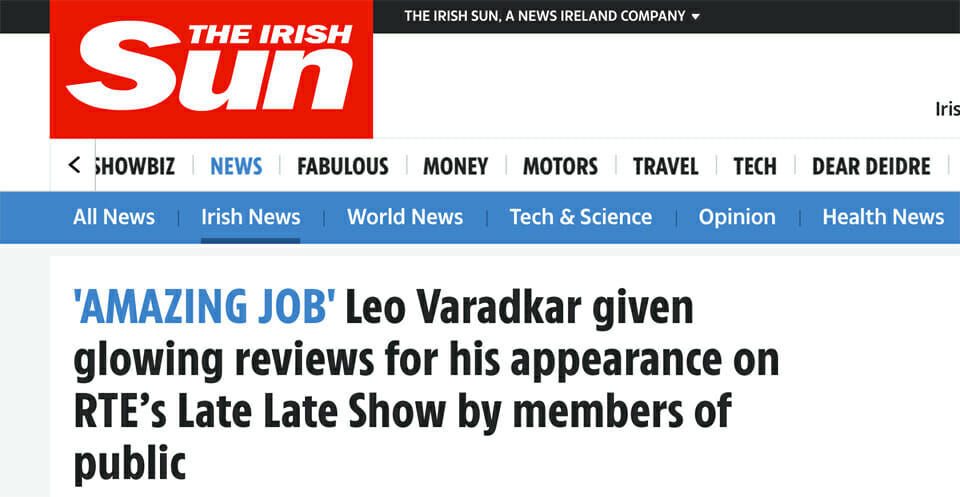 “AMAZING JOB:  Leo Varadkar given glowing reviews for his appearance on RTE’s Late Late Show by members of public “, gushes the Sun, before stating that the Dear Leader’s stunning performance turned Sinn Féin voters towards Fine Gael, and, one presumes, the light.

Even Pravda would have blushed at this kind of coverage, but in fairness to the Irish Sun, the tone and the lack of critical questioning has come to typify much media coverage of the government’s role in the crisis.

Take Leo’s Prime Time interview with David McCullough last night. It was exactly what we’ve come to expect from RTE, the tax-payer funded, dominant media platform. Asked about the disastrous outcomes for care homes, Varadkar was allowed to waffle on about the government’s achievements rather than being pressed on their dreadful record and the death of so many people.

He then denied that the figures given by the INMO in regard to nurses and healthcare workers in recovery were correct – sidestepping the real issue, which is that they have been burdened with the worst infection rate in the world, without being called out by McCullough. It was a win for Leo, who was allowed to diminish the nurse’s concerns without contradiction.

McCullough did press Varadkar on his asinine inclusion of a quote from Mean Girls in his latest Address to a Grateful Nation, but then undermined his own question by framing it as a  “trivial matter”.

Leo rattled off his spin-doctor’s response about people who thought it crass being “snobbish” because he’s so hip and cool and down with the kids (as evidenced by his cringy, topless, bag-of-cans picnic with the lads in the park during the lockdown).

He might as well have added, like Gretchen from Mean Girls: “I’m sorry that people are so jealous of me. But I can’t help it that I’m so popular.”

Of course, Varadkar’s desire to be cool may be harmless but the looming and frankly terrifying recession as a result of the lockdown isn’t. And if most of the media won’t hold the government to account, who will?

Political parties understand the value of spin and of paying PR companies a small fortune to keep them both in the public eye and in public favour. In his first 18 months as Taoiseach, Leo Varadkar spent €1.8 million on PR and advertising, for example.

But what better way than to ensure favourable media coverage than to have the media actually dependent on politicians to survive – to really own the media, and unofficially make them mouthpieces for the regime?

RTÉ have sought emergency funding from the government due to Covid-19, and the national broadcaster, which pays many of its presenters exorbitant wages, seems a bottomless pit for cash. However, Fianna Fáil want to bring in a “household charge” to force us to pay even more for RTÉ – and they’re not stopping there.

Michéal Martin, a man who constantly complains that the media should be fairer to Fianna Fáil, is pressing hard to have the charge introduced. But Fianna Fáil also want a whopping €30 million fund set up to fund print journalism in Ireland.

That’s €30 million every year from our taxes, to pay for a media that often doesn’t represent us, and that we don’t want to support. It’s the equivalent of forcing you to buy the Irish Times or take a subscription to the Independent even if you haven’t read them in years.

The plan was welcomed by NewsBrands Ireland, which represents the newspaper industry. Well of course it was. There are very few who would turn down €30 million of money even if it comes with hidden strings attached.

The real issue here isn’t media bias, it’s media dependency. This will become a case of expecting the press to bite the hand that feeds it. No-one will want to call out the Emperor’s new clothes.

Forcing taxpayers to fund a failing media – which will only guarantee that less hard questions are asked of our politicians – should be strongly resisted.

If you’d like to support fair, independent media that challenges the consensus please consider donating to Gript. You can donate here

Does Leo Varadkar toast his conscience first, or the State?