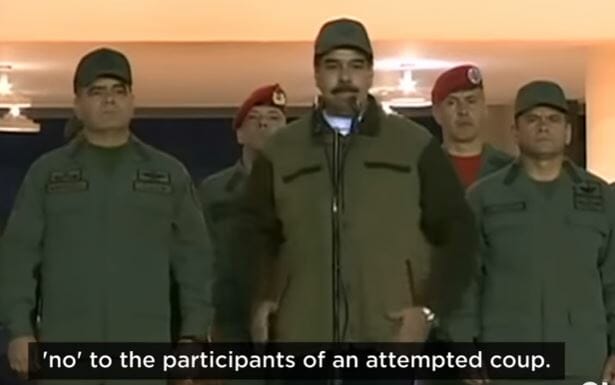 Venezuelan leader Nicolás Maduro has announced his intention to arm 4 million socialist militiamen that will be loyal to the embattled president as he seeks to prevent another coup attempt.

Since last year’s failed overthrow by opposition leader and interim president Juan Guaidó, Maduro has already armed 3 million people, creating a militia that will work in tandem with the established Bolivarian Armed Forces but answering directly to him.

Critics of Maduro say this consolidation of power is compounded by a law preventing civilian gun ownership, a ban that was introduced by his predecessor, Hugo Chávez.

The monopoly on gun ownership by forces loyal to the president makes any chance of replacing Maduro less likely, as substantial numbers of anti-Maduro military personnel have already been purged from the army.

Maduro addressed his ever-growing “National Bolivarian Militia” recently, telling the crowd that “the goal for the year 2020 is 4 million (militia members) nationwide.”

Maduro, who was present as new members took an oath of loyalty to him, said that the armed socialists controlled 14,000 bases across the country, with almost 64,000 units formed to follow his orders.

“The better prepared we are, the better armed we are, to defend the country against American imperialism and the Colombian oligarchy, we can guarantee peace, production, and progress to our beloved nation,” he claimed.

Critics of the Venezuelan regime say the militia is illegal and unconstitutional, something Maduro himself appeared to admit when insisting that the Bolivarian army would have to accept the armed civilians as part of the armed forces.