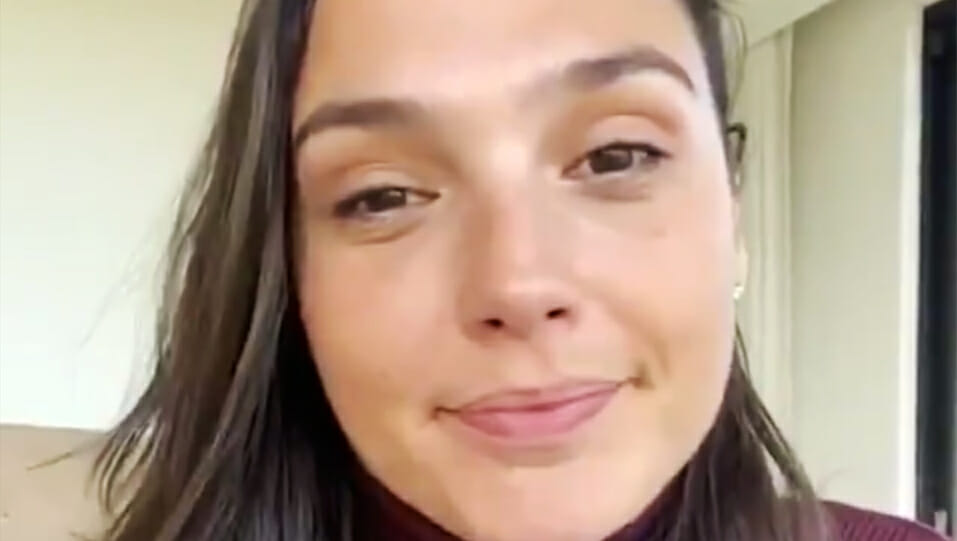 Just when you thought things in this #Covid-19 landscape couldn’t get more frustrating, along comes some god-awful celebrity video to annoy us.

Everyone is already restless, housebound, kind of scared, and fairly fed-up. The kids are moping around the house, emptying cupboards of food at a speed that would rise envy in a swarm of locusts, and squabbling from sunrise to sunset over everything and anything.

Even the dog is bored and sick of walks, because there is little else to do. There’s nothing in the news but Coronavirus from morning until night, and we’re all wracked with guilt because we can’t even visit our elderly parents.

Then, as we casually flick through Twitter for some light relief, we are assailed with this rubbish from the most deluded people on the planet.

“We are in this together, we will get through it together.”

Gal Gadot just posted a video of her and other artists (who are also quarantined because of the COVID-19) singing Imagine by John Lennon on Instagram. pic.twitter.com/fRV6GhAF92

I’m sorry for inflicting it on you. It’s awful.

The level of self-awareness is between zero and minus infinity. Imagine the delusional Celeb What’s App group chat before this was shot.

Apparently it was Gal Gadot’s idea, and was probably done with good intentions since she is Wonder Woman and can slay armies of Nazis with her eyes.

All the celebrities singing (a loose description) in the cutesy handmade effort are apparently in quarantine. We wish them well, I’m sure, though we’re obviously wondering how they can possibly cope without the legions of staff and helpers required to assist them navigate life as we know it.

Maybe they’re not coping. Some of them look a bit rough, though not Gal who would look amazing living in a pigsty and eating potato peels.

But I digress. Back to the truly terrible, cheesy video. Actually, if it was just cheesy, that would be fine. We all like a bit of cheesy stuff.

But the self-indulgence and virtue-signalling is so strong is this one. Plus, the singing is mostly awful and the choice of song is worse.

Everyone is panicking about toilet rolls, and we have these mega-rich movie-stars crooning “imagine no possessions, I wonder if you can.” Well yes, with almost a billion people in the world living in extreme poverty, earning less than €2 a day, there are plenty of people who don’t have to imagine that, they experience it everyday, and they don’t bloody well like it.

They’d love some possessions, or even a square meal, or a chance at education. I imagine if they actually heard this rubbish they might just rise up and scale those celebrity mansion walls and take off with as much as they could carry.

What’s more, these fabulously wealthy people can actually do something to help, besides making themselves feel good on Insta. Donating even half their possessions (might help with all that imagining) to help the health services and poverty relief agencies currently in turmoil because of this pandemic, would be a good start.

As Matt Treacy wrote last week on this platform, Imagine (even if it was written by John Lennon) is “one of the most irritating, vacuous songs considered to be a rock classic”.

Lennon wrote some great songs, but this isn’t one of them. The line about the world being better without religion is another old and tired canard, unless you like Stalin, Hitler and Mao all made life better for the unfortunates who endured under their monstrous (and atheistic) regimes.

Like the virus that’s keeping us all in lockdown, this video has gone viral with 5 million views in jig time, though from the comments on Twitter I suspect its mostly people asking “are you having a laugh, Gad?”.

It’s only a video. And celebrities are dopey and annoying at the best of times, so its mostly best to ignore their self-indulgent nonsense. But we are living in trying times. Rein in it people.