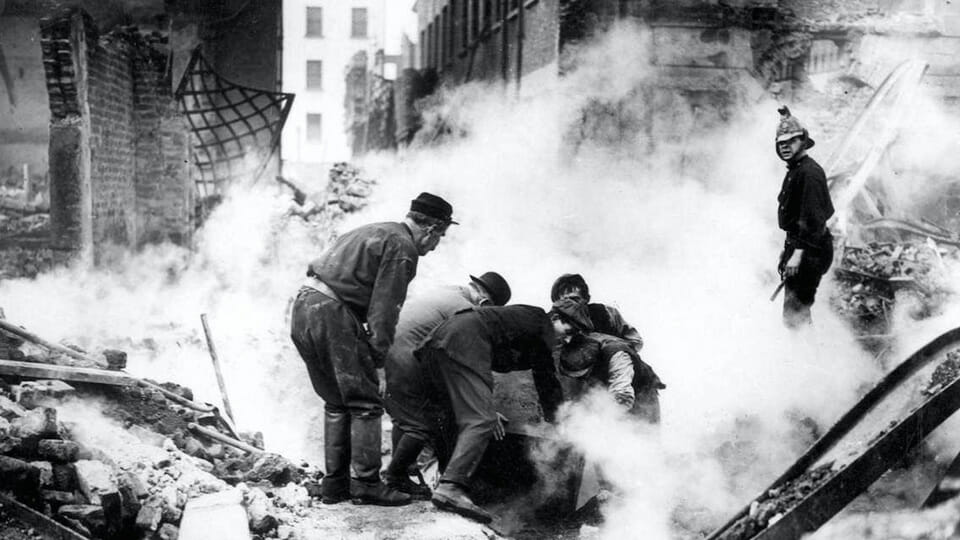 On April 28 1916, as the fierce fighting of Easter Week began to abate, one of the most notorious events of the rising took place.

15 civilians were killed in houses and business premises on North King Street by British soldiers. The street had been the scene of some of the stoutest resistance by the Volunteers, under the command of Ned Daly, who had been stationed in the Four Courts but had subsequently barricaded the area so well that British troops had to fight to get through.

The Volunteers were still dug in and had killed up to 20 members of the South Staffordshire Regiment who had launched a frontal assault on Daly’s men.

The frustration and anger felt by British soldiers at the Volunteer’s resistance led them to take revenge on civilians living and working in North King Street. On Friday 28 April, and into the early hours of Saturday morning, British troops ordered men out of homes or broke into buildings, shooting and stabbing fifteen people to death, including two teenagers.

The British army responded to the murders of the civilians by claiming they were indistinguishable from the Volunteers who they claimed were not in uniform. This was not true.

In any event, those killed were randomly chosen just because they were in buildings on North King Street. Some of the bodies were stripped of money, watches and other valuables.

The only person who was killed who may have been a Volunteer was Paddy Bealin, a charge hand at O’Rourke’s pub at no. 177 North King Street. He and another victim were buried in the cellar. Bealin is listed in the Last Post which purports to be comprehensive list of Volunteers killed. It was published years later and not particularly accurate. A cousin of my Grandad from Moher in Tipp who was intellectually disabled and murdered by Tans is listed.

A British inquiry did not recommend charges and the killings were largely forgotten given the scale of the Rising deaths.

In April 2016 the Stoneybatter and Smithfield Peoples’ History Project unveiled a plaque at the corner of North King Street and Coleraine Street.

A 2014 documentary Áille an Uafáis (A Terrible Beauty) is devoted partly to the North King Street murders. It was screened on TG4.

REVIEW: ‘Dark Waters’: how an American icon poisoned a town