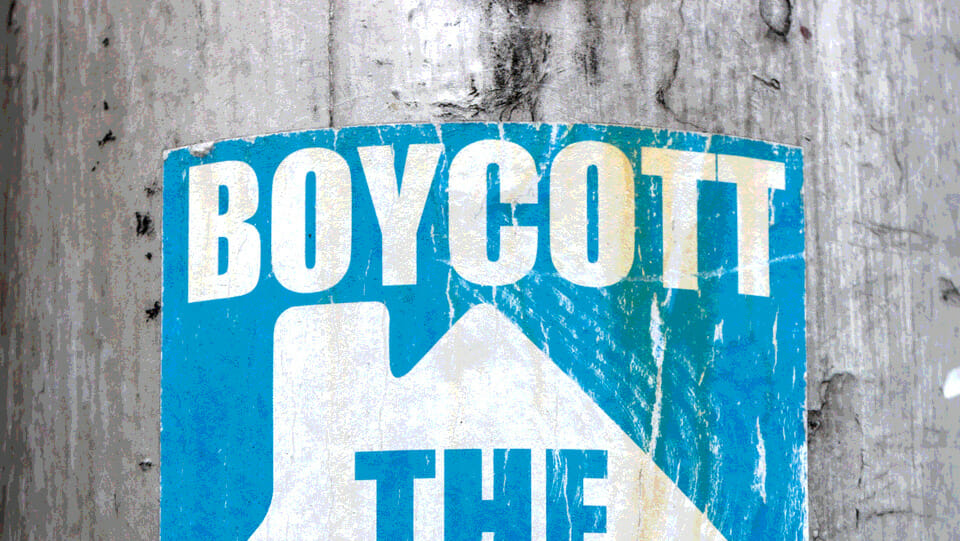 In 1880 – 140 years ago – one of the most significant events in the social history took place on the estate of Lord Erne near Lough Mask in Mayo.

It involved a campaign of social and economic ostracism – collective actions which have been known ever since by the name of Erne’s land agent Captain Charles Boycott. The actions of ordinary people bequeathed a new and significant verb to the English language.

At this time 80% of all the land in Ireland was owned by landlords, most of them absentee, with most of their tenants occupying holdings of less than 15 acres. During the 1870s, with bad harvests and the constant threat of famine, landlords refused to lower the rents and instead began evicting those who could not pay. Like many other agents Captain Boycott was involved in the forced eviction of desperate people. By 1880, however, In 1880, the Land League had begun its campaign for tenant’s rights, and tenants were being urged to take action against greedy landlords. 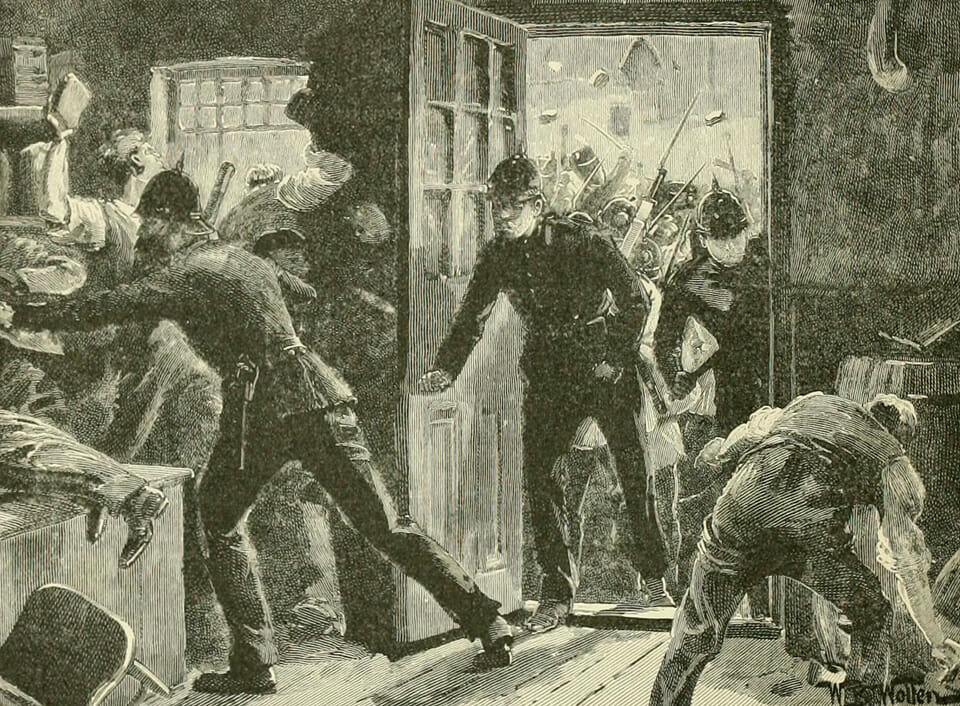 Fight between Land Leagers and Police from the book Life and times of William E. Gladstone

The Mayo Land League called for the shunning of Captain Boycott in response to planned evictions, urging all to withdraw their labor and services. Shops refused to serve him, and no workers could be found to harvest his crops. When Boycott tried to serve eviction notices under the protection of the local constabulary, the RIC, women threw stones and mud at them. Local shops in Ballinrobe refusing to serve him, and the local blacksmith withdrew his services.

Louth and Monaghan Orangemen were brought in to gather the harvest for Captain Boycott under the protection of 1,000 RIC men and Royal Hussars. It eventually cost the government £10,000 to take in £500 in crops.

Charles Stewart Parnell was fully behind the campaign and urged that transgressors against the boycott be “shunned.” This was a curiously old means of dealing with those who broke community mores and had very old roots particularly perhaps among the isolated religious communities of Pilgrim America.  The campaign also included a rare strike by farm labourers for higher wages.

The boycott spread to other estates in 1880 to 1882, and in December 1880 led to Parnell and other Land League leaders being tried for conspiracy to stop the payment of rent.

In political terms, the campaign was a massive success and led to the effective victory of the League in securing the “three Fs” of fair rent, fixity of tenure and free sale.

The downside of that was that the Land Law (1881) Act was accompanied by, indeed preceded by, a new Coercion Act under the hated William Buckshot Forster.

It had taken a generation for the Irish rural population to recover some of its spirit as the country recovered somewhat from the Famine or starvation.

Curiously, as in other instances, it was such a recovery that emboldened people to assert themselves once more. A defeated demoralised people tend not to make revolutionaries.

It was this which encouraged the foundation of the Land League which became aligned to a more militant political strategy under the leadership of Parnell.

The boycotts, strikes and other manifestations of resistance marked a significant shift towards a more optimistic outlook.

The involvement of the Orangemen, many of them from not too dissimilar social and economic background illustrated the deeply reactionary nature of Orangeism.

The Land War of which the boycotts were an integral part was the most important social revolution to take place here. Ownership of the land was central to the Conquest that began in the 12th century and witnessed the effective transfer of ownership to native farmers.

Some left-wing historians have argued that the solution of the land question avoided a wider socialist revolution. Which is to miss the point entirely.

The Ken Loach school of historiography is based on imaginary “Soviets” which were no more than aggravated strikes, and land collectivisation. None of them have a good history.

The immediate aftermath of the Land War witnessed events like the Phoenix Park killings, the prime target of which conspiracy had been Forster but he managed to avoid his fate.

All of that was perhaps the outworking of frustration and the desire for revenge. It was not a good time for Irish Fenianism which took another generation to recover and to become perhaps the key influence on the revolutionary political military and cultural movements of the later 19th and earlier 20th centuries. 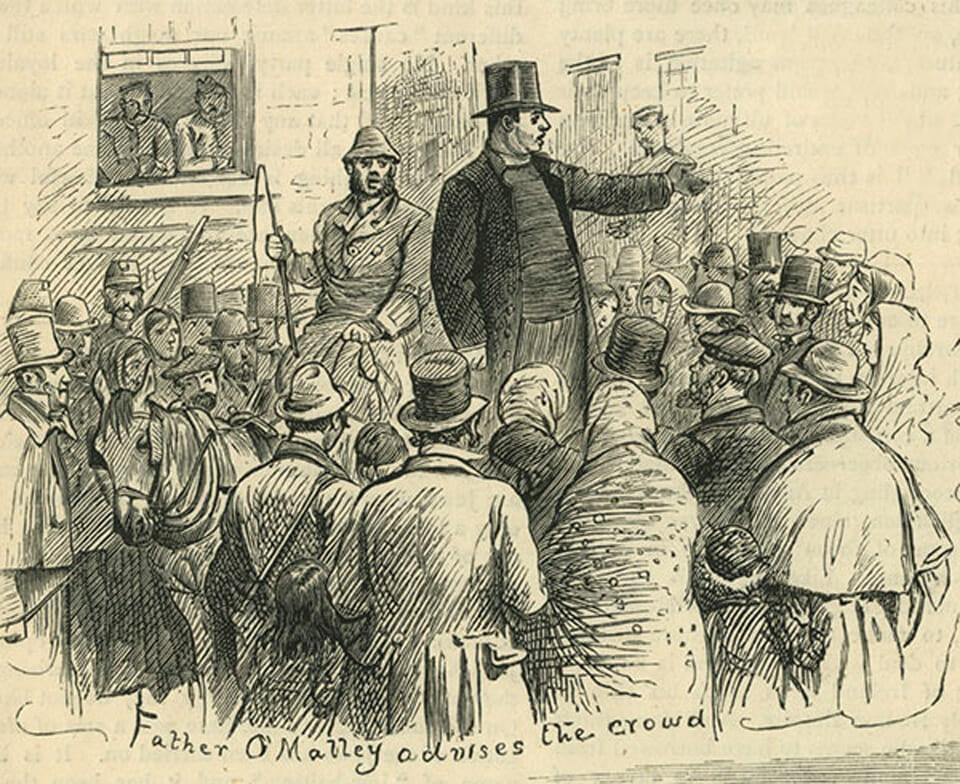 Father O’Malley advises the crowd. Father John O’Malley was the parish priest at the Neale (where Lord Erne’s estates were located). He was also the president of the Ballinrobe Land League in 1880. Fr. John O’Malley was one of the leaders of the Boycott movement and is credited both with being the “inventor” of the term Boycott and of leading the tenant farmers in the movement. He was also responsible for building the church in the Neale in 1875 and the school in the Neale in 1883.  Credit: http://www.maggieblanck.com/Mayopages/Boycott.html From the Print collection of Maggie Land Blanck, The Graphic, November 27, 1880