HEART-BREAK: Married for 62 years, now Covid has them apart 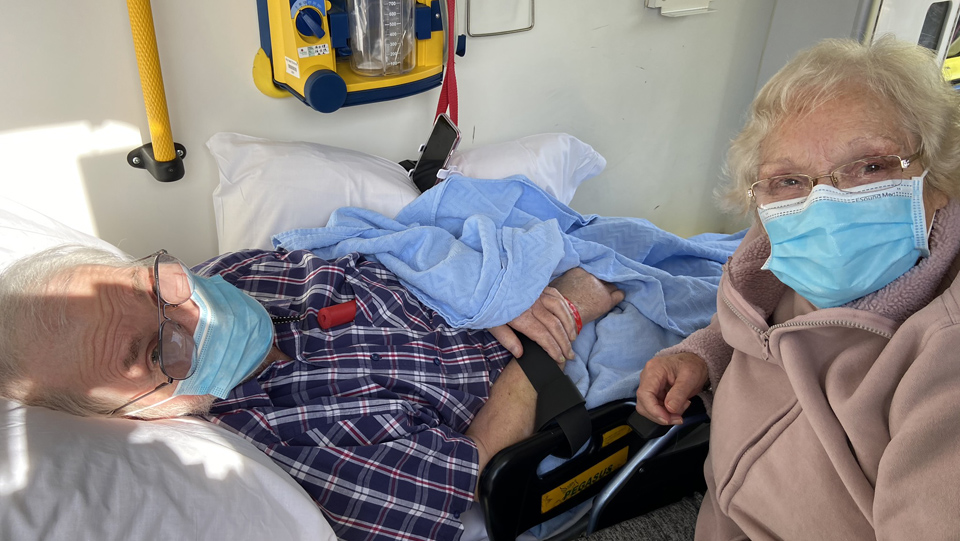 Dolores and Michael Harrison have been married for 62 years. Their daughter Fiona says they have never been apart, but now a series of health complications and Covid restrictions mean that they are being kept apart from their families and from each other. Their daughter Fiona says the continued restrictions are “soul-destroying” and, with the Care for Champions 2x2x2 campaign has spent time is calling for a “working alongside Covid” plan which would mean families could safely spend more time with their elderly and frail loved ones at the end of their lives.

“At the beginning of March, following a massive stroke and other complications, we moved our Mother to a nursing facility. As you can imagine after a brain injury, her speech and memory has been seriously affected. She can understand what you say, but her words are very limited. She can’t communicate the way she used to. We can only ask questions that have a yes or no answer. She answers yes to almost everything. Sometimes yes means yes, or yes can also mean no,” Fiona Harrison said.

“In the second week of March they told us visiting was being suspended. At first my Father would drive to see her every day, sometimes twice a day to chat through the window. They’ve been married for 62 years and never been apart until then.”

“We thought this would be a temporary measure and didn’t panic too much.  We could chat through the window so we could still see her. Then further restrictions put a stop to that.  My Mother went from seeing someone every day to not physically seeing anyone. ”

“We never knew what each call would bring. Some nights we’d have to just sit and look at her on facetime just keeping her company so she’s not alone. As time goes by, these nights get more frequent. It doesn’t get any easier. We don’t want her to think we put her in there and forgot all about her or that we don’t care.”

“At the end of March my Father had a fall down the stairs, resulting in him breaking his neck. We had gone into lockdown the night before so we were denied access to be with him, we had to sit in our cars in the early hours of the morning to find out if he was dead or alive.”

“Unlike Mam when she got sick she had everyone around her, he was alone and had no-one. The hospital advised us he had no movement from the neck down and would remain that way. We still weren’t allowed to see him.”

“In May, when he was being transferred to another hospital, we were allowed to see him for the first time for a few minutes at the ambulance but we had to keep our distance. He was strapped onto a stretcher, so he could only hear us. Two days later he developed serious complications and had to be transferred to another hospital. They were unsure how things would go so allowed us to see him briefly.”

“Luckily he improved. Once he was transferred back to the stepdown hospital we were allowed to go to the window to see him. We’d drive 90kms there and back to get his washing and try see him through a tinted window. He could see out but we could barely see him. We asked if they could wheel him to the main door for his 81st birthday, not to be near him, just so we could sing happy birthday to him. We were point blank told no and got (what felt like) a talking down to on the seriousness of Covid and told how lucky were that he was on the ground floor so we could see him.  My mother was in a nursing home after a two serious brain injuries, my father was paralysed from the neck down, both happening within months of each other and we were the lucky ones!” 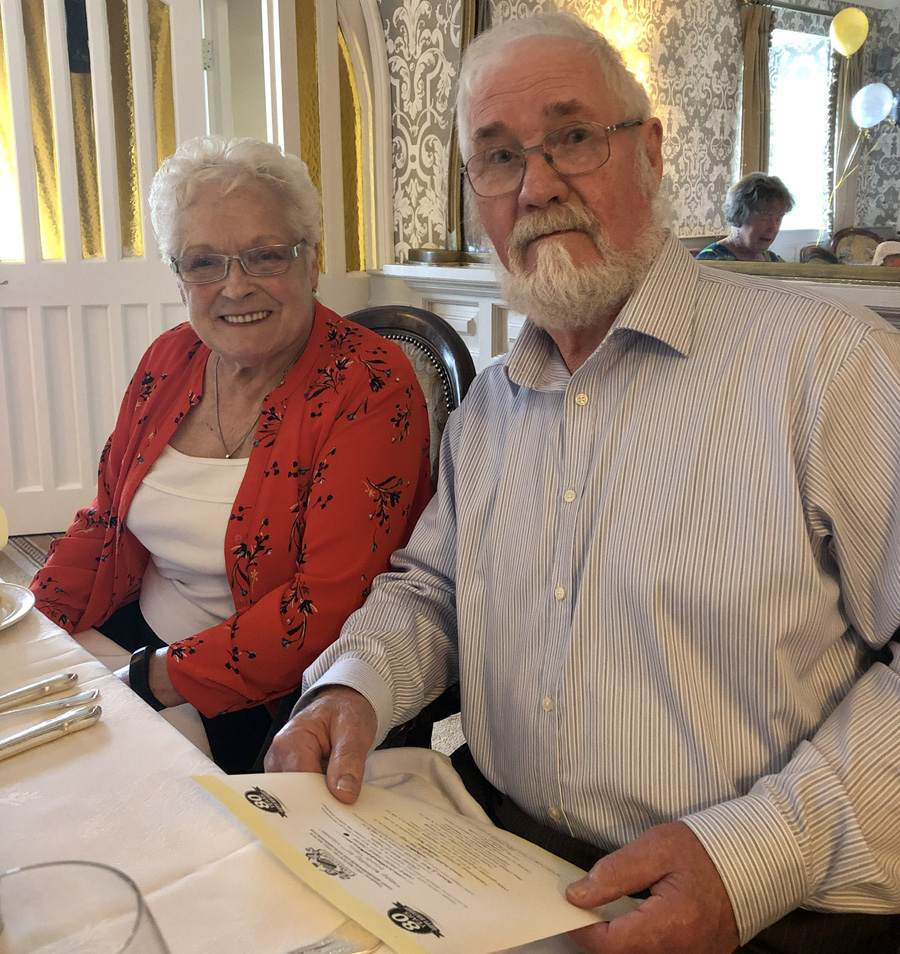 “We respect that he was their patient, but he was still our parent, our Dad.”

“In June, two family members were allowed to visit my Mam at specified times. One person per visit. One on a Sunday afternoon, the other on a Tuesday morning.  But no family members were allowed to go to her window. Our Sundays were already mostly taken up driving 90kms (there and back) to get Dad’s washing (trying to avoid his meal times). Now we had to work around both facilities so we could see each of them.”

“But we managed. Mam would be wheeled to a small room for 30 minutes then whisked away from us. You could see the tears on her face.  I found one on one visits are very hard emotionally. Because of the distance, we’d take it in turns to drive to Dad, but only one of us could see Mam. The other would have to stay in the car. Knowing your parent is a few feet away and you can’t see them is harder to do than you can image. In August she was allowed two people per visit, twice a week. The extra person in the room made a big difference, you felt you had emotional support. Then there was a confirmed case in the nursing home and all visits were suspended until  September.  Just was the visits were about to be restored, we went into countywide restrictions.”

“Now our only communication was facetime for both parents. During my Dad’s stay in hospital all he was worried about was my Mam.”

“In October, my Dad was transferred to the NRH. We knew the ambulance would  be going passed Mam’s nursing home so I asked the paramedics if they could help us out by stopping for a few minutes. At this stage my parents hadn’t seen each out for 7 months. With the help of Lifeline ambulance services, he got to say hello to my Mam and hold her hand.”

“It was lovely to see. We can’t thank them enough for their help and humanity. I haven’t seen my Dad since that day and my Mam I’ve only seen once for a few minutes.  She has regressed quite a bit during the last few months.”

“Having one parent in a care facility is hard enough. Having both is harder. But when you add all the restrictions, lack of updates, the distance between them, the mental emotions and lack of clarity into the mix its soul destroying for any family. ”

“At some stage a “Working alongside covid” plan needs to be address for families with spend whatever time they have left with their loved ones,” she said.

Majella Beattie of the Care for Champions campaign said that elderly people and their families were being ignored. “We need to be heard, they need to be heard. What is happening in our nursing homes, and the exclusion of family is nothing short of callousness and a scandal. Just like recent scandals from our past, this will be the scandal of the future. We have an opportunity to change that now,”she said.

“The  2x2x2 campaign has spent time looking at risk assessing family contact, and to minimise the risk we’re asking that  2 family members can visit twice a week with just one person per visit taking all precautions the same as the nursing home staff,” she said.

The campaign has welcomed a statement from the Irish Association of Social Workers (IASW) , which called for the government to make funds available as a matter of urgency to ensure safe visiting spaces for care centres. The IASW noted that, in contrast to other European countries, the Irish Government has selected the lowest possible level of visiting arrangements with the lowest number of people and has failed to fund any capital expenditure to develop safer visiting spaces, despite the known negative impact of visiting restrictions on the physical, mental, social and emotional well- being of residents”.

Bees: Spare a thought – and a dandelion – for Apis Mellifera Mellifera