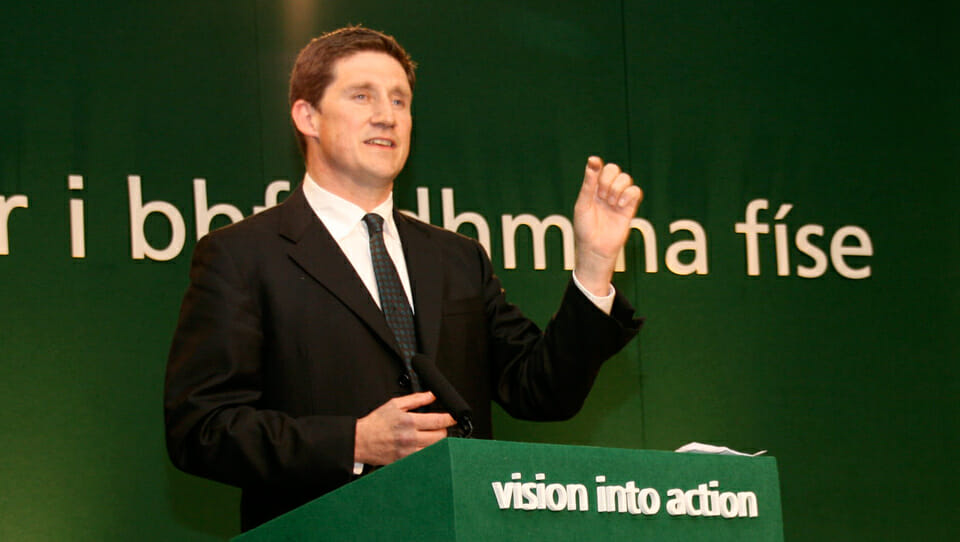 It’s always worth reading the small print before you make a purchase, and Green members who do just that might find that the relentless media advertising of the programme for government is, well, overly optimistic.

Here’s what the PFG says about emissions. We’ve taken the liberty of highlighting some relevant parts:

It’s a basic principle of democracy that no Government can bind the hands of its successor. Anything this Government does in the realm of emissions can be undone, at will, by whoever we elect in 2024, assuming the election takes place in that year.

Green Party TD Ossian Smyth was on Virgin Media’s Tonight Show last night, valiantly making the case that the 7% reduction was compound – i.e. that there would be a 7% reduction in 2021, another 7% in 2022, and so on. If that was the case, it would be music to Greenie ears. Only one problem: It’s not the case.

In fact, Simon Coveney, by contrast, is very clear about what it means:

At Fine Gael PP, Simon Coveney understood to have said most of the emissions reductions will come in the latter half of this decade, with preparations in the first.

What this Government, then, is going to do, is prepare the ground for big reductions in emissions in the second half of the coming decade. And of course, if another Government comes along and finds that those preparations are inadequate, so be it. There’ll be nothing Coveney – or the Greens for that matter – can do.

Indeed, by back-loading the proposed reductions, they make it far less likely that they’ll ever be achieved. To get to an average of 7% over ten years, with most of that to come in the last few years, means that some Government, at some stage in about 2027 or 2028, is going to have to not just cut, but slash, emissions in a single year, with all the attendant economic consequences.

If this was something you were going to do (and it remains questionable why anyone would want to bother, given the non-existent impact Ireland’s emissions have, given our size) you’d want to do it with a slow, consistent, and gentle squeeze. Not by grabbing the economy by the neck and throttling it over the course of a year or two.

What it probably guarantees is that by the time the Greens leave Government, Ireland’s emissions will have fallen negligibly, if at all, and the only comfort they’ll have is that they’ll have prepared the ground for Sinn Fein to finish the job.

Green members who read the small print might find that they’ve been taken for fools.