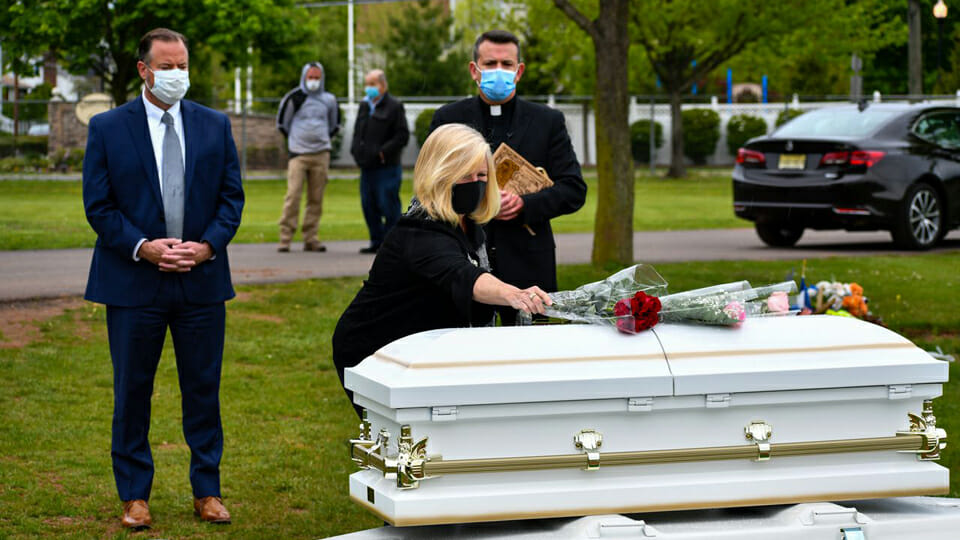 Two babies who had been abandoned at a New Jersey recycling center in February have been buried with dignity by the Catholic Diocese of Metuchen.

Last Friday, a graveside committal service laid the bodies of the two infants to rest in St. Peter’s Catholic Cemetery in New Brunswick. Because of covid-19 restrictions, the small number of mourners wore face masks as they prayed for the babies they had never known.

The funeral was coordinated by the parishioners and clergy of  St. Peter the Apostle University and Community Parish  with the support of the Office of the Mayor of the City of New Brunswick, for two abandoned babies found hours apart on Feb. 19 at a recycling center in the city.
When the first infant was found, police were called to the scene, and a subsequent search of the facility resulted in the discovery of another newborn about six hours later.

Shortly after learning of the news, the Bishop of Metuchen contacted the Office of the Mayor and offered to bury the infants if their bodies went unclaimed.

“In a time when people are experiencing anxiety, sickness and death as a result of COVID-19 and as we hear the voices of politicians and celebrities echoing similar sentiments in their public service announcements, reminding us that we cannot put a value on human life, we need to come together as a nation to remember that every life, at every stage, is sacred and is to be protected and cherished,” said Bishop Checchio.

At the cemetery, before the white casket was lowered into its final resting place, the mourners looked on and prayed.

“In the face of these deaths, all words fail,” said Msgr. Joseph G. Celano, pastor of St. Peter the Apostle University and Community Parish, who presided over the rite of committal at the cemetery. “But we know that the Lord Jesus accompanies us and accompanies these children with tender mercy and love.”

Among those who attended the graveside service were Anthony P. Kearns, chancellor for the Diocese of Metuchen; Jennifer Ruggiero, diocesan director of the Office of Human Life and Dignity; and Mayor James M. Cahill of the City of New Brunswick.

“Even in our own grief for the loss of these two children, we believe that one short sleep passed, and they will wake eternally,” said Msgr. Celano.

According to Ruggiero, who placed a small bouquet of red roses – a symbol of life often associated with pro-life causes and a representation of the spiritual bouquet of prayers being offered for the infants by people across the four-county diocese – on the casket before it was lowered into the grave, “the loss of these infants and the burial feels especially tragic leading to Mother’s Day.”

“Since the investigation is still underway, we don’t know the full circumstances that led to the loss of life for these precious babies, but the loss of an infant is always deeply heartbreaking,” said Ruggiero. “If, indeed, the parents felt they had no other options and nowhere to turn for help, hopefully raising awareness about the help that is out there will help to prevent future tragedies.”

“This is the loss of so many gifts – the gift of life for these babies and the gift of motherhood, for their biological mother and also the woman longing for motherhood who may have welcomed these children into her home,” said Ruggiero.

Under the New Jersey Safe Haven Infant Protection Act, infants less than 30 days old who would otherwise be abandoned can be safely, legally and anonymously left at any hospital emergency room, police station, fire station, ambulance, first aid, and rescue squad buildings that are staffed 24 hours a day, seven days a week. As long as the child shows no signs of intentional abuse, no name or other information is required and the infant can be left without fear of arrest or prosecution. The Safe Haven hotline is 1-877-839-2339.

Recognizing the need to support mothers, the United States Conference of Catholic Bishops on March 25 launched a nationwide campaign called “Walking with Moms in Need – A Year of Service,” noted Ruggiero.

“The purpose of this initiative is to have parishes across the country access, expand and communicate the many services that are available to pregnant and parenting moms in need,” said Ruggiero. “In the Diocese of Metuchen, large posters – in both English and Spanish – were sent to all parishes and Catholic schools, local pregnancy help centers, Catholic Charities and other agencies which offer material, spiritual and emotional support, as well as information about Safe Haven.”

Ruggiero noted she hopes women facing challenging pregnancies will see the Church as a place they can find help, “especially with its myriad of social services and organizations dedicated to meeting the needs of people in crisis.”

“As we process this heartbreaking tragedy, I ask the faithful and all people of good will to pray for the souls of these infants and to pray for their parents too, that they may experience healing from this misguided, tragic decision,” said Bishop Checchio. “This is another reminder to us that every human being is made in the image and likeness of God and every life must be respected and protected absolutely from the moment life begins at conception until natural death. As a Church, we will continue to advocate for the sanctity of all human life so that each person, no matter their stage in life, will be treated with the dignity and care which these infants were denied in life.”