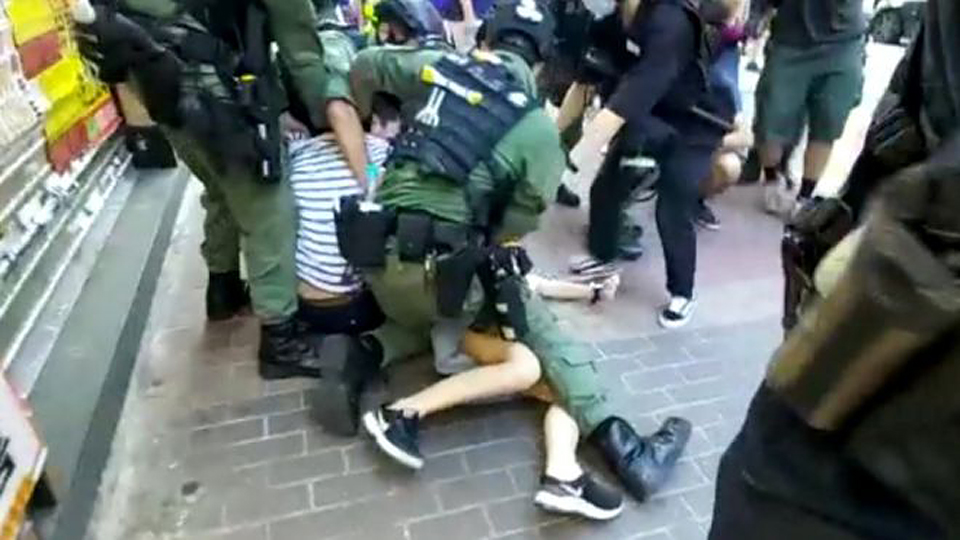 Police in Hong Kong have arrested 289 people and used pepper spray and pepper balls to disperse pro-democracy demonstrators. Amongst those caught on camera being brutalised by the police was a 12 year old girl who was said to be shopping for crayons.

The demonstration was called Sunday to challenge the postponement of elections, and the imposition of a draconian ‘security law’ imposed by China, and bringing the region further under the control of the Chinese government.

Thousands of police were out in force to break up the protest and arrest demonstrators.

Bedlam just broke out on Shantung Street in Mong Kong after undercover police posing as protesters tackled several people to the ground and pepper sprayed the crowd. pic.twitter.com/SeOT8BWLS3

The arrest of a 12-year old girl by Hong Kong police went viral after it was caught on camera by student reporters.

A young girl is tackled to the ground by riot police after attempting to flee during a pro-democracy protest in Mong Kok. Vid courtesy: HKUST Radio News Reporting Team. In full: https://t.co/nUaPabs9Zl #hongkong pic.twitter.com/4DQi2sapCY

The police brutality towards the child drew criticism internationally

“Most of the time, the words he uses are stirring up hatred and contempt for the government and also raising the societal discontent among the Hong Kong people,” said Li Kwai-wah, a senior police superintendent.

The arrests have led to further concerns that Hong Kong residents will continue to have freedoms and rights, including the right to free speech, restricted as China tightens its grip on the region.