100 years ago: The Burning of Cork by the Tans made world news 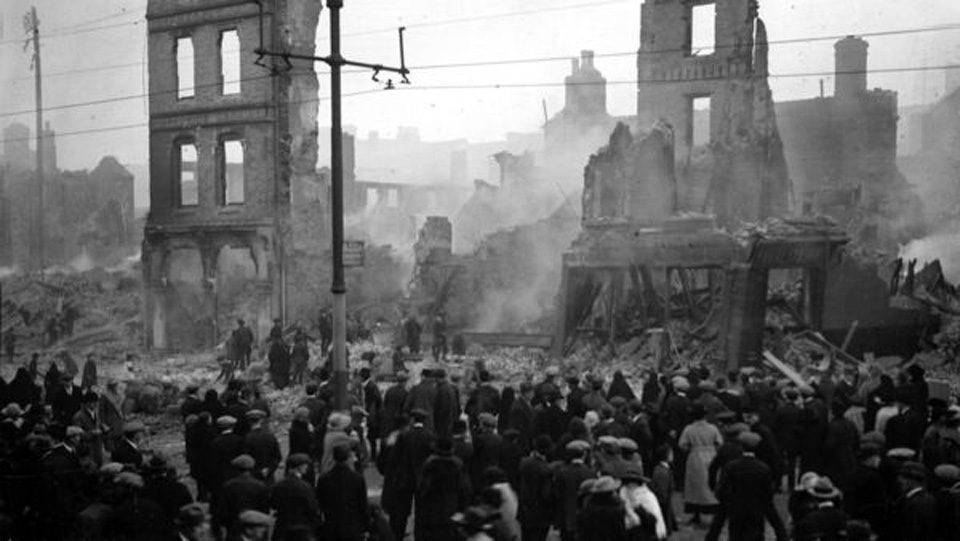 In the aftermath of a series of IRA military successes, including the killing of the intelligence agents in Dublin on Bloody Sunday and the ambush on the Auxiliaries at Kilmichael on November 28, it was decided to declare martial law in four Munster counties; Cork, Tipperary, Limerick and Kerry which came into effect on December 10.

That was enabled by the Restoration of Order in Ireland Act which had been passed in August, and replaced civil courts and inquests with military procedures. This was in large part due to the increasing numbers of murders, lootings and burnings being carried out by British forces and the findings against them by civilian inquests.

The Cork No.1 Brigade which had been growing increasingly aggressive and effective in the city decided to meet the new scenario head on. On the night of December 10, six Volunteers from A Company of the 1st Battalion based on the north side, under the command of Seánie O’Donoghue staged an ambush on two lorry loads of Auxies who were on their way from Victoria Barracks, now Collins Barracks, on the Old Youghal Road to make sure that the curfew was being adhered to.

The ambush took place just after 8pm as the Auxies drove in the direction of Dillon’s Cross. Most of the 13 members of the Auxiliary K company were wounded and one died. When news reached the barracks the other members of Auxiliary K Company, under the command of Charles Schulze, planned what was to become a night of mayhem.

They left Victoria barracks again at 9.30pm and their first stop was Dillon’s Cross where passers by were beaten and the family home of a deceased Fenian prisoner, Brian Dillon, was burned. 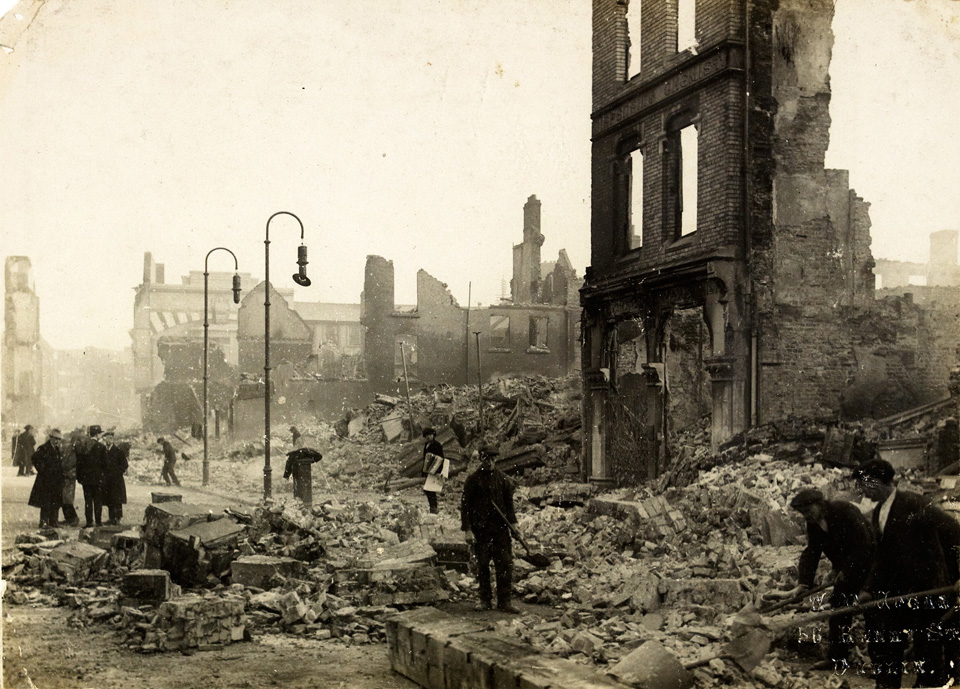 Workers clearing the rubble in Patrick’s Street, Cork after the burning of the city

They then made their way to Summerhill where a tram was attacked and were joined in Patrick’s Street by parties of Black and Tans where a tram was burned. Much of the initial violence was directed at civilians who were robbed at gun or bayonet point.

At four in the morning loud explosions were heard in the vicinity of Union quay when the City Hall and Carnegie Library were set alight by incendiary bombs after the buildings were doused in petrol. Those acts of cultural destruction tend not to be dwelt upon by revisionist historians who decry the Dublin Brigade’s burning of Gandon’s Custom House in May 1921.

In total, 300 homes and 40 shops were burned to the ground. When the fire service arrived they were first refused assistance from the British military and then prevented from tackling fires with water hoses cut and firemen attacked. The damages were estimated at £3 million in 1920 which would equate to over €150 million today.

Two IRA Volunteers were also killed after bloodhounds allegedly tracked one of the ambushers to the farm of the Delaney brothers Con and Jeremiah on Dublin Hill. They were shot dead at 2am that morning and are remembered in the name of the Delaney Brothers GAA club which is still based in the area close to Dillon’s Cross.

The reaction to the burning of Cork made world news. It was raised in the American Congress and at Westminster and undoubtedly had an impact on deciding future British policy which while it continued to impose a heavy handed military strategy, seems to have restricted some of the more undisciplined but clearly officially approved terrorism.

December was also the month in which Lloyd George began to sound out various Dáil leaders with a view to a deal, and preferably one that would undermine national unity. That proved to be more successful than the Tans.

London would have been encouraged by the actions of some of the less resilient Sinn Féiners such as Wexford TD Sweetman, and the Sinn Féin members on Galway County Council who on December 3 had repudiated the Republic and declared for surrender.

Cork was not for turning. As the city reeled from the devastation of the night before Bishop Daniel Cohalan had given a sermon in the North Monastery placing the ultimate blame for the burning of Cork on the IRA. That was greeted with outrage by many in attendance and rejected by many local priests, one of whom Canon Magnier was killed along with his neighbour Tadgh Crowley at Dunmanway by a contingent of Auxies on the way to the funeral of the one killed at Dillons Cross. Cork Corporation also voted to reject the Bishop’s accusation.

As an old Cork friend reminded me when discussing this, not only were Cork city republicans successful in defeating the British militarily but also retained jurisdiction over the city until it fell to Free State forces during the Civil War in August 1922. Up the Rebels!