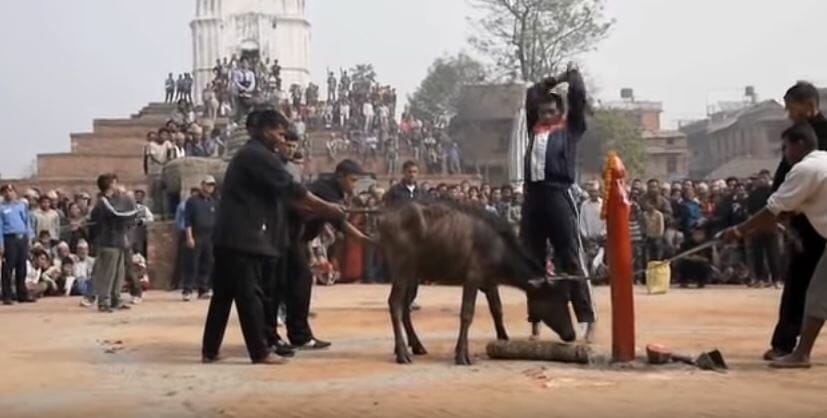 An estimated 3,500 buffalo will be killed as part of the Gadhimai Hindu festival, an animal-sacrificing event that commenced today and occurs every five years in the village of Bariyarpur, Nepal. Hindus believe that the sacrifices bring good luck and power.

Despite being banned by temple authorities, and a 2016 Supreme Court recommendation that the government reduce the number of animals, the sacrifices draw thousands of worshipers from Nepal and India.

Using kukri knives, some 200 butchers descended on the temple area today where the buffalo are kept. The festival began early this morning with the killing of a chicken, goat, rat, pig and pigeon, whilst a Hindu leader also offered blood from his own body.

Speaking to the Independent.co.uk, Alokparna Sengupta of Humane Society International in India said the festival was one of the most depressing and challenging experiences of her life:

The suffering of these animals is so upsetting, they have endured exhausting journeys to get here and are paraded in front of a baying crowd as all around them they witness other animals being decapitated one by one. Buffalo calves look on in bewilderment as their mothers are slaughtered in front of them. The hysteria and apparent jubilation at seeing confused and frightened animals being slaughtered was very disturbing. We may not have a bloodless Gadhimai this time, but we are determined that one day we will see an end to this gruesome spectacle.

This following footage was taken at the festival in 2010. Viewer discretion is advised: