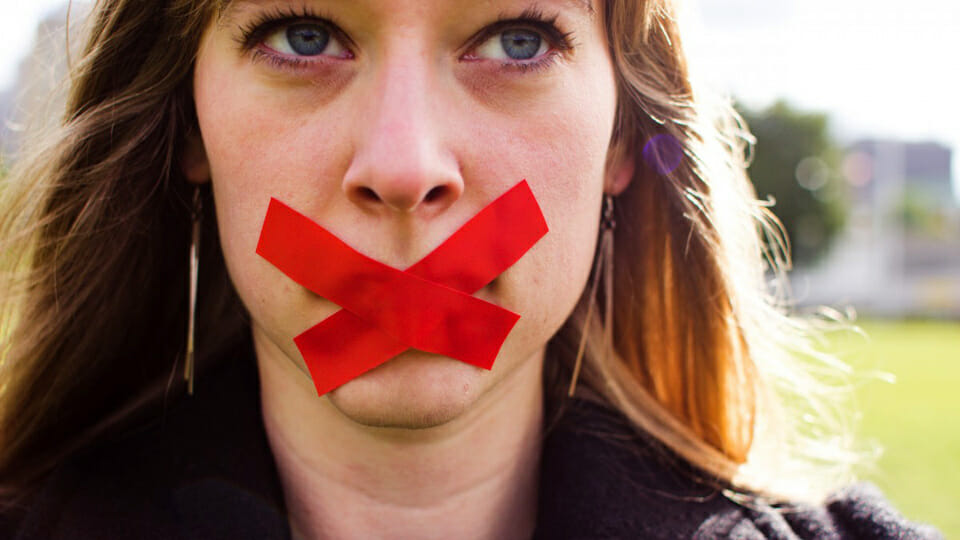 The most noticeable thing about International Women’s Week 2020 seems to be how many women are being censored for daring to have strong opinions.

I thought encouraging women to be bold and fearless in thinking for themselves was rather the point of the whole shindig. It would appear that’s not the case.

There’s a deafening silence from the state-sponsored NGOs in relation to this censorship of women. Their approval is implicit in their refusal to speak up when women are being cancelled.

Take Selina Todd, a professor of modern history and best-selling author in the UK, who has written brilliantly about feminism and challenges for working-class women.

The Telegraph today reports that she has found herself “no-platformed, aggressively trolled and threatened with violence. Two security guards have been drafted in by university bosses to protect her during lectures. Why? Because militant trans- activists are targeting female academics who dare to disagree with their world view; namely that sex is not a valid descriptor and should be abolished as a legal identity, to be replaced by self-described gender.”

For daring to hold a opinion contrary to the new intolerant liberal-left, Prof Todd was cancelled from speaking at the Oxford International Women’s Festival. (Cancelled is the new shorthand for what happens when bullies threaten and coerce everyone into rescinding invitations).

“The focus of my research is women’s history,” she told the Telegraph “I believe in robust evidence and have come to the conclusion that I agree with the legal and traditional definition of men and women according to their biological sex.

“Throughout history women have been treated differently because of their actual or potential roles as mothers. They have been discriminated against in ways that men are not; biology matters. If we don’t define woman and men as separate sexes, then how do we categorise them?”

“I am not transphobic,” she says matter-of-factly. “I have students who are transgender and I have great sympathy for the difficulties they go through as they grapple to work out their gender identity.

None of that mattered. Once the trans extremists had Todd in their sights, the cowards at Oxford weren’t going to stand up to them. Prof Todd wasn’t even planning to talk about trans issues, but she had to be silenced.

Also this week, former British Home Secretary, Amber Rudd, had an invitation to speak at an Oxford University society pulled half an hour before she was due to appear. Not only are liberals intolerant, they also appear to have no manners.

The UN Women Oxford UK society decided to cancel the event because left-wing activists objected to Rudd’s previous involvement in immigration policies, which they claimed had caused harm to minorities.

But wouldn’t it have been better to have challenged Ms Rudd in open forum and had a robust and frank debate about the issues? Apparently not.

Much better to silence uppity women who dare to have strong opinions.

In this neck of the woods, women like Verona Murphy who just got elected in Wexford, would most likely face similar censure for being the wrong kind of woman. Women for Election, one of those many fearless feminist NGOs which have popped up recently, caused a minor Twitter storm when they congratulated Verona Murphy for winning the seat in Wexford, just as they did for every other woman who was victorious. After being reminded Murphy was the wrong kind of woman, they issued a grovelling apology.

Even women who have done sterling work in furthering women’s rights are fair game when it comes to cancel culture.

Indian feminist and film-maker Vaishnavi Sundar recently wrote in Spiked about her experience of being cancelled, and having screenings of her film pulled.

Ms Sundar said she spent her time “advocating for equal opportunities, contraceptive rights, education and the empowerment of women and girls,” yet suddenly began encountering strong resistance “from liberal feminist gatekeepers” to her new film about sexual harassment in the workplace on India.

She also received a “series of rejections from liberal and left-leaning publications which had previously accepted every piece I sent in.”

She then discovered the reason: she had been accused of having ‘transphobic’ views because she “got into a Twitterspat about pre-op trans women in women’s shelters, prisons, bathrooms and women’s sports.”

Ms Sundar believes that biological sex is not a social construct, as do most sane people, but that was enough to get her cancelled from everything, and forever, if trans activists had their way.

“Gender theorists are erasing women, much like patriarchy does,” Ms Sundar wrote. Precisely.

There’s an obvious trend emerging too in regard to these cancellations – that’s it seems to be women in particular who are being shut down.

“I find it very frightening that there’s this new idea that women can be just shut down, silenced,” Selina Todd told the Telegraph. “That should worry us all.”

I agree. Opposing this obnoxious trend in cancelling women should be a focus for all the well-funded NGOs who feature so largely in International Women’s Day events.

But let’s not hold our breath. This is another battle that women will need to fight for themselves.