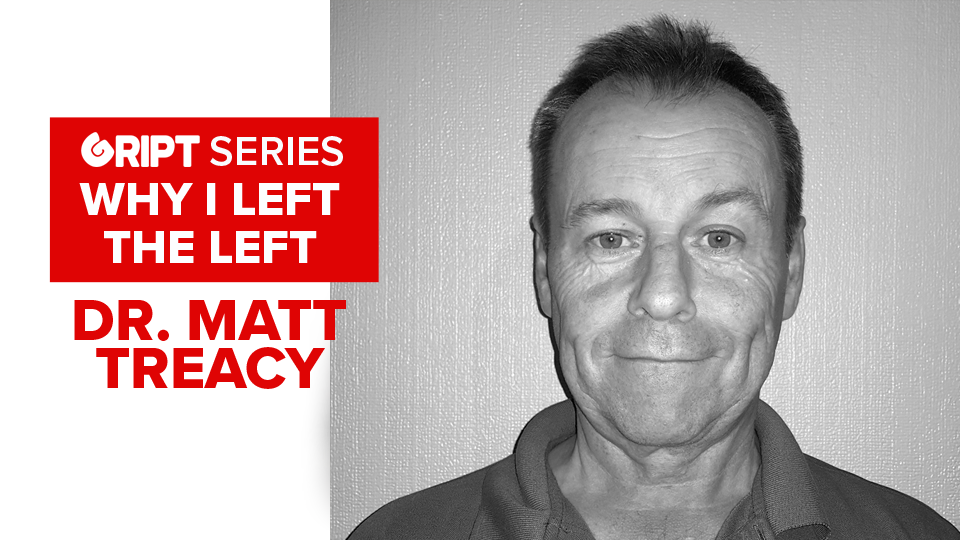 My parting of the ways with the left, or rather the Marxist-oriented left, was a complex one. It took place during the collapse of the Soviet Union and the European socialist states, although for a time I deluded myself that something better might emerge, or even that it might be preferable if the regimes survived.

That historical process was accompanied by a lot of reading both about the actual reality of socialism, and also the philosophical critique of Marxism as a totalitarian millenarian ideology that claims to hold the “key to history” – and on that basis to be able to predict what will happen in the future.

I was also influenced by my experience within the republican movement, and the dangers of surrendering one’s personal autonomy to others in “the leadership,” and to place one’s own future at the mercy of events beyond one’s control.

If there was a moment of epiphany then it was the realisation that neither I nor anyone else is simply a factor in some great historical process. Marxism preached that people were to be consigned parts, but ultimately my fate and that of everyone else was actually part of a process; the working out of the logic of history. We are not simply just factors in some theorem.

Such a view underlies Marxism and defines it as a totalitarian ideology in which human beings are means to an end rather than an end in themselves. A human being’s value is not what use they may be to someone else, and certainly not as a cog in some great wheel which will grind a pre-destined future out of humanity’s blood and bones.

The two great totalitarianisms of the 20th century; Communism and Nazism, took that view to its logical conclusion. Their proponents acted out their belief that you could only improve humanity and create a glorious future by murdering vast numbers of them and turning everyone else into a mindless drone whose only purpose in life is to serve the Party, Class or Race.

The insidious aspect of totalitarian ideologies claiming to be scientific, is that is the basis for insisting that no rational person could possibly disagree. And if rationality is the alleged basis of power founded in the belief that its holders have been given the key to history, then it is justified to destroy or to silence anyone who demurs.

Even as a callow follower of the Prophet of the British Reading Room, it struck me that while the different doctrinaire Marxist groups venerated the great texts and championed the view that only by reading them could someone understand what was going on in the world, the reality was that very few people have read, much less understand, the Marxist classics.

That paradox of course is solved by the creation of a revolutionary elite. They, only removable by death or internal purges, would take the burden of thinking from the shoulders of the masses and most party members. The latter subsist on a few simplistic slogans.

Indeed Lenin, the consummate cynic, in his What is to be Done? came to the conclusion that while the proles are pretended to be the ultimate beneficiaries of social destruction, that they are actually too dim to understand what is necessary; hence the need for deracinated sociopaths such as himself to tell them what to do. Ultra-left parties still tend to be led by such déclassé persons with a paternalistic desire to tell working class people what to do and think.

Part of seeing through this brutal view of the world was the understanding of why totalitarianism seeks to destroy religion. That is why the Russians sought to destroy Christianity and later the Jewish religion; why the Chinese attempted to eradicate Buddhism and other traditions and are today conducting a campaign of cultural genocide against the Uighur Muslims, and why contemporary leftists seek to drive religion and non-materialist traditions to the margins.

They may dress this up as an appeal to the intellect and science, but the purpose is to eradicate alternative understandings of humanity and our place in the universe. Whether a person believes in God or creation is not really at issue, nor what annoys the totalitarians. It is simply their inability to accept any view that does not fit in with their conception of reality.

That can be seen in the complete intolerance displayed by the post-socialist left towards anyone who questions their simplistic myths and prejudices. In the absence of any real belief in the things which motivated socialists like James Connolly or indeed any organic connection to the culture of the people they wish to “liberate”, much of the left has drifted away into the seas of absurdity.

Someone once pointed out that the reality of Marxist collectivism was to create hundreds of millions of isolated individuals. The real struggle, as documented by writers such as Milan Kundera, was to create some space within an all-intrusive state in which to find meaning. The championing of extreme identity politics serves to destroy a sense of human community, which was once the supposed objective of the left.

The old Marxist left could at least make a tangible appeal to a sense of justice, and based itself on social wrongs. The far-left now is a pastiche of the ultra-liberal wing of the American Democratic Party. The American left will conclude its current hysteria with support for whatever creature the Democrats run against Trump. Their Irish equivalents for the most part could be on the Varadkar wing of Fine Gael, a marginal tax band or two aside.

Roger Scruton, the battle of ideas, and why the left has only contempt for those it claims to wish to save