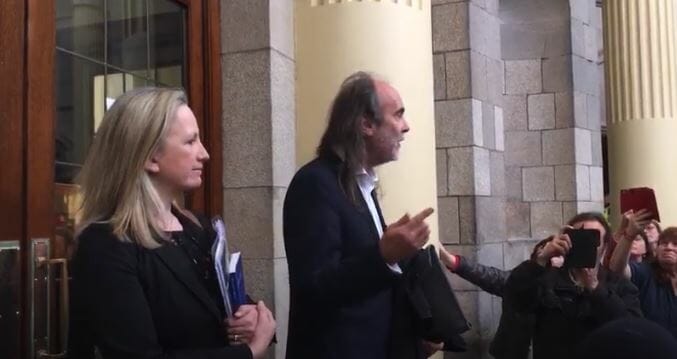 Former journalists John Waters and Gemma O’Doherty have vowed to pursue the State to European courts over lockdown restrictions they claim are unconstitutional, if they do not succeed in ending the lockdown through the Irish court system.

Over 100 supporters joined the plaintiffs at the High Court today, where they continued their action to have the recently enacted emergency legislation and temporary restrictions under the 1947 Health Act declared null and void.

Defence barrister for the State Gerard Meehan requested a two-week adjournment of the case from Justice Deirdre Murphy, claiming that it would allow sworn statements to be prepared for what he called a “quite substantial” challenge.

Representing themselves, the plaintiffs opposed a further adjournment of the case, with Mr. Waters saying the State was attempting to “filibuster” and “procrastinate” over a “very important matter.”

Mr. Meehan also suggested that the Dáil, the Seanad and Ceann Comhairle would have to be added to the proceedings, something that was not objected to.

Ms Justice Murphy said the leave hearing should be heard in two weeks time, and adjourned the matter for 7 days when it will be mentioned again to receive an update on progress.

Speaking to supporters afterwards in the Round Hall of the Four Courts, Mr Waters said old people were being left to die in care homes around the country because of the Minister for Health’s lockdown, and that they would go to European courts if necessary to “overturn this appalling legislation.”