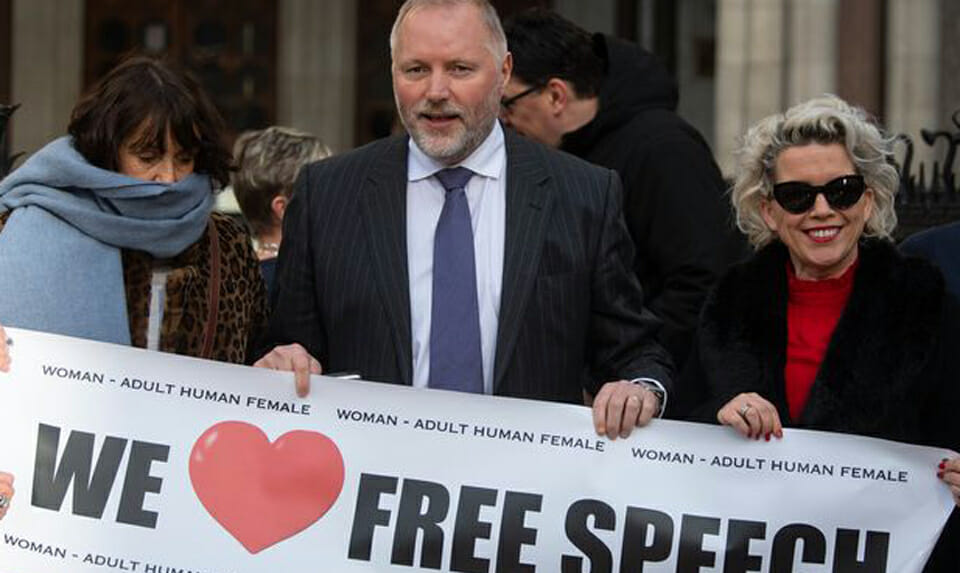 Former police officer Harry Miller has successfully challenged the use of Hate Crime Operational guidelines, issued by the College of Policing in 2014 and followed by police forces nationally; a Judge found they had been ‘unlawfully used to interfere with Mr Miller’s freedom of speech’ when he was visited by a policeman to question him over a ‘“transphobic limerick”’ he shared on Twitter.

The guidelines deal with actions ‘perceived to be motivated by hostility towards religion, race or transgender identity’, which ‘must be recorded “irrespective of whether there is any evidence to identify the hate element”’, and although the police accepted that ‘such incidents are not crimes, they are still logged on a system and can show up during a criminal records check’ when an individual applies for a job. In a ‘landmark ruling’ at the High Court, Mr Justice Julian Knowles ‘ruled the tweets were lawful’, and that ‘there was not “the slightest risk”’ that Mr Miller ‘would commit acriminal offence by continuing to tweet’ – that ‘the UK has never lived in an “Orwellian society”, nor had it experienced “a Cheka, a Gestapo or a Stasi”’ (‘Judge rules in favour of free speech in “transphobic” limerick case’, Telegraph, February 15, 2020).

But for that very reason – used to a political system in which open debate brings about changes in the law and in society by democratic means – we have been slow to recognise the threat of fundamental changes introduced by stealth, incrementally and promoting apparently benign measures.

Coming from different angles, in fact it was a pincer movement conducted by social campaigners on one side and legal activitst on the other, in whose grip the majority are suddenly finding themselves trapped. After his self-funded challenge, Mr Miller celebrated his victory outside court, hailing ‘the outcome as a “watershed moment for liberty”’ and vowing to ‘continue tweeting.’ However, Mr Justice Knowles rejected his ‘wider challenge to the lawfulness of the College of Policing’s guidance, ‘ruling that it “serves legitimate purpose and is not disproportionate”.’ The case will now be tested at the Supreme Court after Mr Justice Knowles ‘granted a “leapfrog certificate” to allow it to skip the Court of Appeal stage’, but as the Telegraph points out, although ‘scathing in his judgment of Mr Miller’s treatment’, Mr Justice Knowles ‘defended the College of Policing’s guidelines on “non-crime hate incidents”, even though they are the source of the problem.

The guidelines speak of incidents that are “perceived … to be motivated by a hostility or prejudice” and which are to be recorded “irrespective of whether there is any evidence to identify the hate element”’; moreover, although ‘the police say they are working hard and that they just do not have the money or time to attend every crime scene’, they are putting huge efforts ‘into recording non-crimes’; the Government has pledged to introduce 20,000 new police officers, but ‘the Home Office must make sure that they are deployed to tackle actual crime, not people’s opinions’ (Telegraph comment, ‘Non-crimes should not waste police time’, February 15, 2020).

Thanks to Freedom of Information requests made by the Telegraph – and cited in court by Mr Miller – it has emerged that ‘nearly 120,000 “non-crime” hate incidents’ were recorded by police forces between 2014 and 2019; in an apparent competition between the forces, South Wales police logged 13,856 cases, ‘exceeding the country’s biggest police force, the Metropolitan Police’, which recorded 9,473 ‘incidents’, followed by Merseyside (8,644) and Surrey (8,256) (‘Police report 12,000 cases of “non-crime” hate incidents’, Telegraph, February 15, 2020).

Mr Miller was ‘investigated’ by Pc Mansoor Gul, a ‘community cohesion officer’ who said Mr Miller needed to “‘check his thinking” – at which point, he says, he knew the police had gone too far’; he says the incident was ‘indicative of the growing “political corruption” of British policing’, recalling ‘strict instructions’ when policing public marches ‘to not even step in time with the music in case it gave the impression of being political’, although now they ‘are doing the complete opposite. “I even have one picture of a British police officer carrying a riot shield painted in the trans flag colours”’ (“‘Don’t tell me to check my thinking … that is not the job of the police”’, Telegraph, February 15, 2020).

Pc Gul disputes Mr Miller’s claim, but in fact it is the police that need to ‘check their thinking’ – even check whether they are still thinking. For several years now, uniformed police have marched in Gay Pride marches; far from ‘community cohesion’, they have been dragged in to become enforcers of sexual diversity, thereby setting the majority against a tiny number of troubled individuals, at the behest of their self-appointed ‘champions’. And the Supreme Court, which will hear Mr Miller’s case and may reject it, thus entrenching intolerance in law, has shown its left-liberal bias regarding Brexit.

In 2010 the Equality Act introduced legal protections on the basis of race and disability – things that cannot be helped – but also sexual activity and identity – things that can be helped. More recently, an employment tribunal judge ruled that the view of tax expert Maya Forstater, who expressed criticism of ‘trans’ issues online, was not ‘a protected philosophical belief under the 2010 Equality Act’ – that there was ‘no legal right to question whether a transgender person is a man or a woman’, and that Ms Forstater’s belief was ‘“not worthy of respect in a democratic society”’ (‘Test case rules against tax expert sacked over transgender tweet’, Telegraph, December 19, 2019).

An Orwellian situation has morphed into a Kafkaesque one, where no one knows exactly what they are accused of and no one knows exactly what they are ‘allowed to say’ – consequently the safest course is to say nothing on the subject. The activists who police other people’s speech are the ones who decide who is guilty and who is innocent, and they can be as offensive as they like – nobody will investigate them; indeed, although the police guidelines purport to protect religion, anyone quoting the Bible or citing it in defence of traditional Christian beliefs on sexuality, is in danger of being arrested or sacked.

We have gone from true tolerance – ‘everyone has a right to their opinion’ – to the self-identifying policers of public speech believing that only their opinion is the truth; but although everyone has a right to their opinion, everyone’s opinion cannot be right, although it does help to be backed up by medical science. In the case of ‘trans’ issues this is entirely lacking, but despite this we have come to a point where, in the face of biological evidence, a tiny number of individuals who believe themselves to be the opposite sex, must be believed.

Indeed, their beliefs must be affirmed and even celebrated, as clinical psychologist Jordan Peterson found in 2017 when he refused to refer to individuals in line with their chosen ‘gender’ and famously protested an Ontario Human Rights Commission ruling that ‘“refusing to refer to a trans person by their chosen name and a personal pronoun that matches their gender identity” in a workplace or a school, would probably be considered discrimination.”’ He ‘argued that his objections were on the grounds of free speech, and nothing to do with discrimination, and that at no time in British Common Law history has the legal code mandated what we must say, as opposed to what we must not say’, while adding that ‘he would used the gender-neutral pronoun of a particular person, if they asked him’ (Mick Brown, ‘What’s wrong with the Petersons?’ Telegraph, February 15, 2020).

In a very short time we have gone from policing speech to censoring speech to compelled speech, but even those who defend the right to free speech fall silent on the issue of banning silent prayer outside abortion clinics.

This is chiefly because the defenders of free speech are on the Left, and although on trans issues they have truth on their side, the strongest party will win if politicians continue to back the trans campaign. In this war of words, the trans fascists will succeed in silencing every mention of the issue apart from fulsome praise for all things trans. The anti-trans campaigners reject dire warnings that criticism can be hurtful, insisting that ‘sticks and stones can break my bones, but words will never hurt me’; but in this case, the words of the trans activists will not only hurt the right to free speech, but kill it off entirely.

Why do the elderly request euthanasia in the Netherlands?

Statues are repositories of enduring truths about ourselves