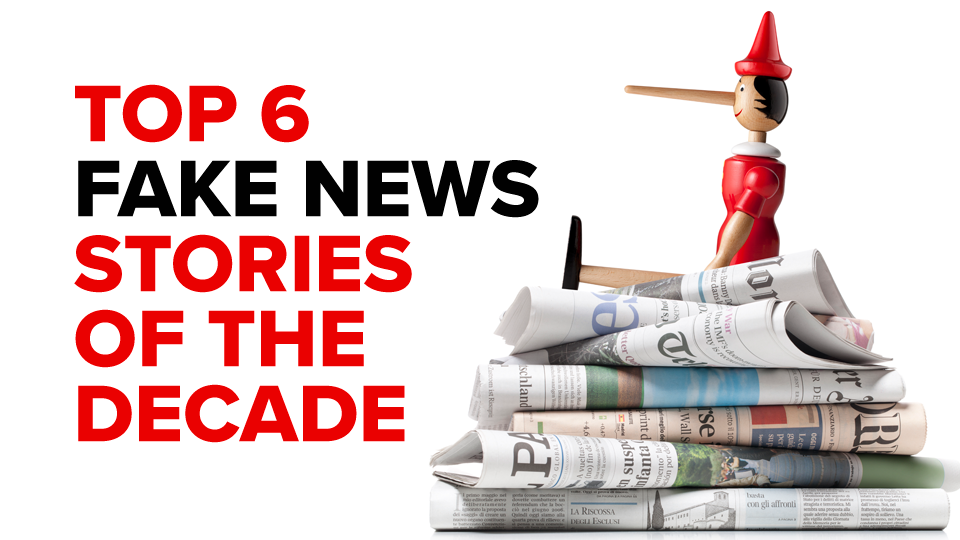 Joseph Goebbels said if you make a lie big and tell it often enough, people will believe it.

Well, 2010 – 2020 had its fair share of very good attempts at pulling the wool over people’s eyes, with the new phrase “fake news” being coined to cover the age old habit of spreading porkie pies.

So here are my Top 6 Fake News Stories of the Decade:

The ‘Empire’ actor messed this one up spectacularly after claiming he was the victim of an assault by two Trump supporters on the streets of Chicago. Following a police investigation, it turned out that Smollett had staged the attack in order to garner publicity and further demonize the president’s supporters, claiming his assailants shouted racist, homophobic slurs and told him this was “MAGA country”. His “attackers”, whom he paid generously, supposedly tried to tie a rope around his neck in the attack.

Watch this interview conducted before Smollett was exposed, in which he uses his acting skills to perfection:

After this headline went around the world, the historian at the centre of the case flip flopped, claiming she didn’t say the babies were dumped in a septic tank, and then afterwards insisting they were. Well, the official report was released in 2019 and said it wasn’t a septic tank. The report speculates about what the structure might be, but seems unclear and evasive. It was claimed the babies were not buried in a dignified manner, but the ads for coffins in local newspapers in the 1900’s and the fact the bones are not together in the concrete structure suggests that the bodies were re-interred more recently by the council.

The only certainty however is that the claim 800 dead babies were thrown in a septic tank is fictional at best.

The sight of a Native American elder engaging with a group of excited white boys in Trump caps was too much of an opportunity to miss for the mainstream media, as news quickly spread around the world that this elder had been mocked, jeered and intimidated by these young deplorables.

Turns out that the Native American was an activist that had form in this game, and actually approached the boys whilst banging a drum and locking eyes on his target.

What could Nick Sandmann do other than smile awkwardly at a man than was seemingly trying to intimidate him?

The accusatory smears of racism and harassment by many media outlets will likely mean an expensive day in court for their defamation.

3: Savita Halapannavar would be alive but for abortion ban

The official inquest found that Savita died because of medical misadventure, specifically an aggressive form of sepsis, not because of the widely reported ban on abortion at the time in Ireland which allowed treatment to save the life of the mother.

The narrative pushed by newspapers around the world was simple: if she had been given an abortion, she would have survived, but this claim was not supported by the findings that followed.

Savita’s tragic death however was politicized and used by campaigners as the tragedy necessary to legalize abortion in 2013, despite Ireland having some of the lowest maternal mortality rates without it.

An OPCW whistleblower has confirmed that the final report into whether the Syrian government used chemical weapons in 2018 was doctored, with key evidence removed that pointed to an exoneration of the Assad regime in this instance.

The doctored OPCW report was used to justify NATO strikes on Damascus in response to the “chemical attack” on Douma, with many more war hawks calling for a full-scale invasion of the country.

The news still hasn’t filtered through that the “chemical attack” was probably staged. Indeed, this interview with one the supposed victims was never given airtime in the western media:

After two years of insisting that Donald Trump had colluded with Russian intelligence assets to win the US election, the Mueller Report was the moment the media bubble burst, reminding everyone that partisan politics in editorial offices inevitably causes embarrassing caricatures of fictitious bogeymen.

In conclusion, isn’t it interesting how the mainstream media so often accuses opponents of spreading fake news, even trying to have fringe voices censored and de-platformed, all the while themselves partaking in much bigger lies, smears and deceptions that have real life consequences.

(Disclaimer: I’ve been reliably told that the decade doesn’t end until December 31st 2020, so watch this space for more of the same)

Yes, “taking the knee” should be booed