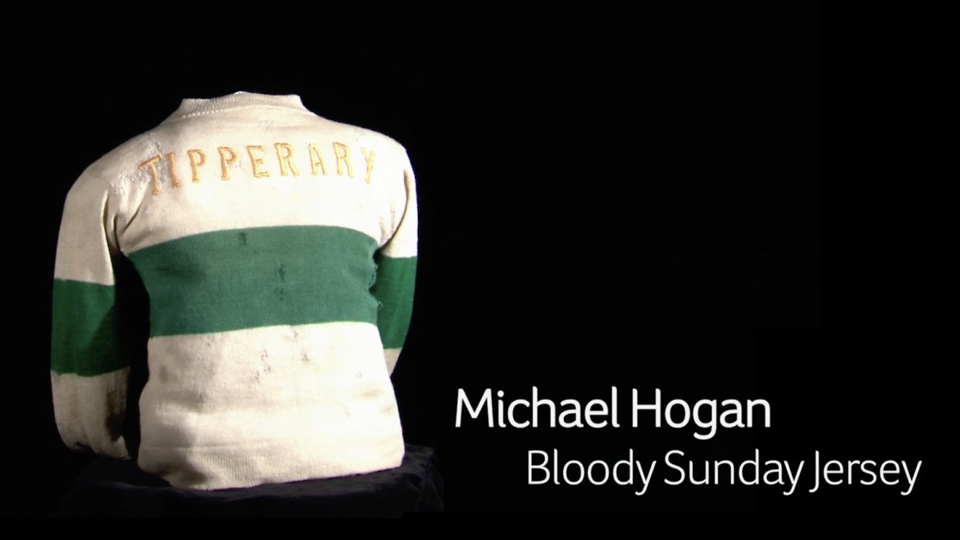 Tipperary’s Gaelic footballers will wear commemorative jerseys to mark the centenary of Bloody Sunday in their Munster final clash with Cork this Sunday.  The jersey features an image of Michael Hogan, the Tipp player shot dead by British forces along with 13 others at Croke Park on 21st November 1920. Black and Tans, along with police, opened fire on the terrified crowd as a challenge match was being played between Dublin and Tipperary.

Hogan, from Grangemockler,  was just 24 and a member of the Irish Volunteers . He and his team mate, Jim Egan were amongst those who fell in a hail of bullets, though Egan survived. Tom Ryan, a young spectator, went to pray beside the dying Hogan and was also shot and died from his injuries.

The Hogan Stand at Croke Park, built in 1924, is named after Michael Hogan.

Tipperary Team sponsor Teneo agreed to forego their name on the front of this commemorative jersey in favour of the symbolic Tipperary name printed in gold across the front. Teneo Chairman and CEO and Tipperary native Declan Kelly congratulated David Power’s team on reaching the Munster Final and said he was “honoured to be associated with the Tipperary Senior Football team as we commemorate this very significant period in our history”.

Tipperary County board said that: “In advance of Tipperary’s involvement in the 2020 Munster Senior Football final on Sunday week, November 22nd, Tipperary Co. Board wishes to confirm that, coinciding with the 100-year anniversary of Bloody Sunday, it is only fitting that the Tipperary team will wear the official replica green and white jersey as worn by Tipperary on that eventful day as a mark of respect to all of the fallen.”

“No other event since the foundation of the Gaelic Athletic Association has affected our wonderful organisation so much as Bloody Sunday, a day in which Tipperary player Michael Hogan and 13 others were fatally wounded.

The Tipperary players and management of 2020 are honoured to wear the official replica green and white jersey in this year’s Munster Final and play their part in marking this historic anniversary event,” they said.