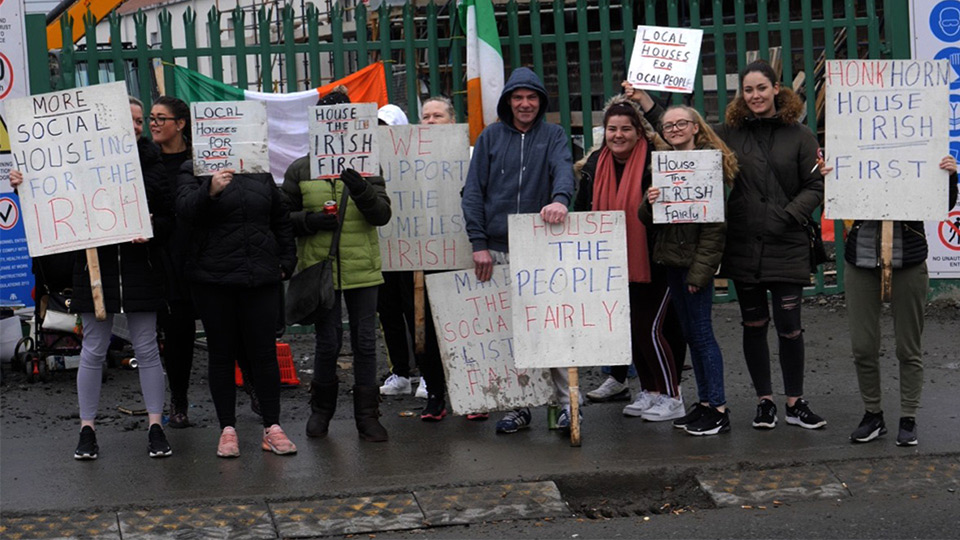 This morning, the Government has announced the publication of its White Paper on Direct Provision, designed as agreed in the Programme for Government, with the objective of ending the current inadequate system of assessing and accommodating people who arrive here seeking asylum.

But this proposed solution would appear to be much worse than the problem. It makes no reference at all to the proven fact that the majority of those who apply for asylum or international protection are eventually found to be making bogus claims.

Neither does it address the elephant in the room – that we already have a housing crisis, with 10,000 homeless Irish people in desperate straits including 4,000 children. How are we to trust the State, with that dismal record, to provide housing for illegal immigrants without shunting aside our own people, especially given the reputation Ireland will gain as a soft touch for bogus applications?

The new system will simply expedite the current process of “integrating” asylum applicants – including bogus claims – and providing them with the same rights as all citizens and all those who come here legitimately.

Among the key provisions are:

In announcing this White Paper, which is based on a report by Dr. Catharine Daly, former Secretary General of the European Commission, Minster Roderic O’Gorman stated the aim would be to have applicants “integrate from day one.”

That will include the right to work after six months, regardless of whether an application has been successful, along with all other rights short of full citizenship, and of course that is being worked on that as well.

It is planned that this will allow 3,500 new arrivals to be accommodated every year. In an attempt to claim all of this is in response to public demand, O’Gorman ludicrously declares:

Which would explain the widespread disquiet and opposition to the placement of “undocumented” and largely illegal immigrants in communities that have had DP centres foisted on them without consultation.

The document runs to over 170 pages and will require analysing in greater detail. However, even just reading the press release and the supportive comment of those journalists given the heads up, it is apparent that this will all be pitched in the context of the usual Care Bear Lollipop Lane gumph.

It is clear too from the paper that one of the main beneficiaries of all of this will be the NGOs whose fingerprints are all over the document and whose staff and bank accounts will benefit considerably from the increased public funding channelled to them and their landlord agencies and friends who will be given control of accommodation provision.

NGOs are directly referred to on p48 as the agencies responsible for “developing urban renewal projects” centred on the “needs” of thousands of people who just arrive here, by-passing many other places they could apply for protection in. Who gave these NGOs such a power over all of this?

While there are a few passing references to speeding up the process of deciding on the legitimacy of applications, there is nothing to state how practically this will be achieved. Nor that the criteria be tightened, and of course deportation of the majority who are found to be bogus, is the word that dared not be published, in any language.

There is no reason why as in other jurisdictions the majority of those arriving here could not be processed within days or weeks, sometimes simply based on where they have arrived from, and in many instances by exposing false stories. Rather than allowing those making them to invent new ones and drag the whole thing out for years with the assistance of tax-funded ideologically motivated legal people and advocacy groups.

Indeed the entire proposal is couched in language and within a setting that almost assumes that every applicant will remain here regardless, and indeed that seems to reflect the current situation. Minister for Justice McEntee boasted about no-one being deported from this country during Covid, but during a debate to overturn the citizenship legislation before Christmas, she also indicated her willingness to amnesty all illegal immigrants currently living here – some 17,000 people or more.

The application process is basically open-ended and there is no indication that this will come to a stop, despite a claim in the document that all will be processed after two six month periods, of initial assessment and appeal. That is already supposed to happen but we have people turning up in court on serious offences who have been living here illegally but without sanction for over ten years, and often openly doing so despite having been given deportation orders.

If successful, applicants will then move into the loving embrace of “wraparound supports” (p65) which, if the experience of other countries is anything to go by, can become a byword for lifelong welfare dependency and public provision at the expense of citizens and legitimate working migrants.

In the even that an applicant is found to be lying, let’s not beat around the bush, then eventual deportation if it ever happens will be “deportee centred”. The report says:

The message emerging from all of this, and one that will already be downloaded as part of the people trafficker’s prospectus far from these shores is; “Help us get you to Ireland.”  Once here, you are promised the “wraparound” of a life you never believed was possible. And, you will be helping to “enrich our communities”. The housing and employment needs of people already living here are of secondary importance.