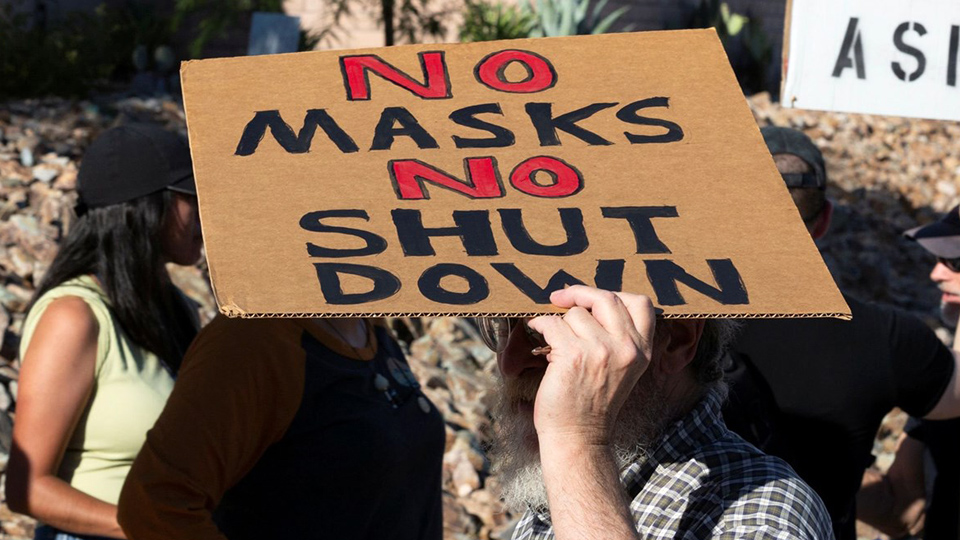 It was a big weekend in media land for lengthy pieces about the apparently dangerous “rise of the far right” in Ireland.

The Journal, the Irish Times, the Irish Independent and the Examiner (to a lesser estent) featured couple-of-thousand-word plus pieces this weekend claiming to be detailed investigations into the phenomenon, and its apparent connection to the recent anti facemask, anti-lockdown protests in Dublin. The Irish Times even adorned its piece with a nice image of shadowy figures giving Hitler’s Nazi salute in front of a tricolour:

Message: They’re in our midst, these Nazis.

The thrust of the pieces was broadly the same: A small number of far-right figures are eagerly trying to use the anti-facemask, anti-lockdown movements to garner new members, and new supporters. That’s almost certainly true: All political movements, whether they be far-right, far-left, or centre, are usually trying to use the issue of the moment to win new supporters.

By and large, though, the articles were fairy stories – a sort of “be good, or the nazis are coming” morality tale for the middle-class millennials of Dublin six.

While it is broadly true that there is an organised far-right in Ireland, it’s also true that it is so small that both articles could basically name the same five or six people with a one hundred percent overlap.

And what’s more, both articles had to concede, right off the bat, that the “far right” did not represent a majority, or even a large minority, of those at the protests. Here’s the Journal:

A spate of recent anti-lockdown demonstrations in Dublin, one of which ended in violence, has highlighted the gradual growth of their street presence in recent months.

Most people attending these actions are probably not aware of the links — many are motivated by a sense of frustration with the current measures and the government’s handling of the pandemic.

Undoubtedly, however, some fringe groups are feeding off that frustration and even stoking it with both explicit and wink-and-nod gestures towards increasingly popular conspiracy theories.

Notice how that is presented: The bit that admits that most people at the protests are just normal folks is sandwiched neatly in between two lines claiming that the protests are infiltrated by fringe groups. Yeah, it says, they’re not nazis, but they’re being used by nazis as pawns.

And here’s the Irish Times:

The far right is a tiny minority of the attendees at the Yellow Vest and HFI-led protests. Culloty says it is important to realise that people attending these protests are from a broad range of backgrounds.

Some believe in conspiracy theories about the virus but have no problem with immigration. Others, probably the majority, simply think the Government restrictions have gone too far.

That’s much clearer, but you have to read – no kidding – one thousand, five hundred and eighty seven words into the article before you get to it.

To some extent, it really doesn’t matter that the media are imagining the rise of a far right movement in Ireland. What they imagine is of little relevance to the ordinary person, after all. But it is worth noting that these pieces were both directly connected to the anti-lockdown, anti-facemask protests. Both may have made a cursory attempt to pretend otherwise, but the message to the average reader is very clear: Attend these protests, or agree with them, and you are basically a neo-nazi.

What’s astonishing though, is that even as the newspapers declared, begrudgingly, that most people who attended the protests were not far-right, there is basically no attempt by the media to figure out why they did attend, beyond writing pieces explicitly linking them to the “far right”. It’s a neat little slander, but it adds absolutely nothing to the national debate.

In truth: Where else do these people have to go, but to the streets? Where are the liberal, personal freedom loving protests against continued restrictions on personal autonomy? Where are the pro-choice protests about people’s right to make their own healthcare decisions? Where are the left-leaning politicians opposed to laws limiting free movement?

These are not fringe views, incidentally. They are held, according to most polling, by at least a fifth of the population, and maybe more.

What’s more, there is zero effort, ever, in the media to understand why far-left views are so dominant in Ireland, even as there’s no evidence of majority support for them. As Niamh wrote at the weekend, we live in a country where the health service is apparently afraid to use the word “woman”, instead referring to “people with a cervix”. How did that happen? You won’t find the answer to it in either the Irish Times, or the Journal, lest they offend the wrong people.

The Irish media is incapable of covering the relentless march of the far-left through our institutions, or the extent to which fringe views become state policy overnight, largely through the behind-the-scenes lobbying of unelected, but state-funded, groups. A whole generation in the universities is being subjected to ideologically motivated “training” on issues ranging from race, to gender, to crime and punishment, and the media has zero interest.

But a few thousand people attend a protest, and there are thousands of words devoted to the potential rise of an Irish Hitler.

It’s a bad joke. The “far right” in Ireland represents nobody. It’s just that if you disagree with the borg-like Irish establishment, there’s basically nobody else to stand beside at a protest.

Red Tape: “A month later, my application to be a vaccinator still isn’t approved”