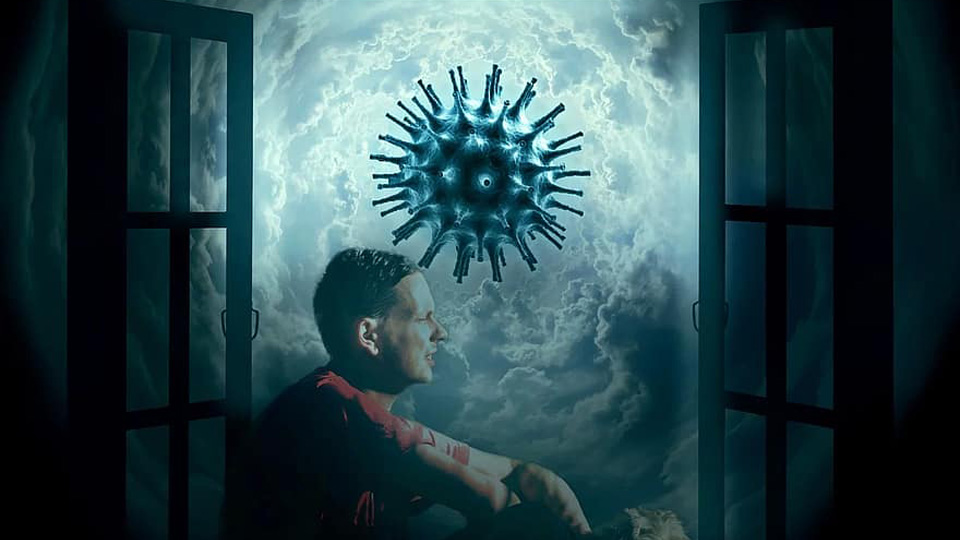 On Friday, Jack Lambert, who is professor of medicine and infectious diseases at the Mater and UCD School of Medicine, was sharply critical of the actions of the government who are now being guided to a Level 5 lockdown by the National Public Health Advisory Team (NPHET).

Prof Lambert was the latest in a growing number of scientists and medical experts – including the WHO – who have gone public because they feel lockdowns are ill-advised. A “lockdown is the last resort” he wrote in the Irish Times. “We cannot continue to feed fear, anxiety and depression”.

Feeding fear is precisely what’s been happening in this country for months now. A daily message of doom is being fed to the people, with an unquestioning media ratcheting up Project Fear at the behest of a government on whom many unhealthily rely for funding and advertising revenue.

Every day in Ireland the numbers are collated with dire seriousness.  Even though the number of deaths remain very low, we can tell from the solemn air of the press briefings that this is serious stuff, because Dr. Ronan Glynn, and the returned Dr Tony Holohan and the suits in NPHET brief us daily with direly serious faces. It’s not a medieval plague cart by any means but still, Minister Donnelly warns us that we better shun lepers and friends alike. “It is going to be a difficult winter” he says: plan not to meet anyone.

It doesn’t seem to matter that many of these experts got projections hopelessly wrong before. Prof Sam McConkey told RTE in April that Covid-19 could lead to 120,000 deaths in Ireland and described the danger posed by the virus as “the Spanish Flu mixed up with the Irish Civil War which was 100 years ago mixed up with the 1929 stock market crash — ­altogether at the same time.”

He was wrong by a factor of some 6000% – instead of 120,000 we had 1849 deaths with HIQA cautioning that figure might be overstated by some 500 deaths – but that doesn’t seem to matter. Project Fear has been rolled out for the past 7 months, lasting long after the daily deaths from Covid had declined to low single digit figures, and the ICUs emptied to Covid patients.

The headlines in most of the papers are misleading and not grounded in facts. Describing Covid-19 as a “relentless enemy” which has been “silently winning” as the Independent did is to ignore the actual data which shows nothing like a return to the spike in ICU occupancy or deaths we saw in March and April.

This graph below is what the Irish people should be seeing on the daily news, instead of the narrative of fear and devastation which is the nightly discourse now on every platform with some few exceptions. The situation is “rapidly deteriorating” the Irish Times proclaimed two days ago, pushing Project Fear instead of the fact.

Similarly, the actual data from the Department of Health paints a different picture to the dire warnings we hear on the radio and on our screens every day. Look at yesterday’s 14 day report  from the HSPC for example.

From 11,000 confirmed cases, just 3% needed to be hospitalised. Even more significant, just 0.2% of cases need to be admitted to the ICU. So it’s clear that while tests are confirming high numbers of people with Covid-19, the virus is not as virulent as we were led to believe, since the overwhelming majority did not need to be hospitalised.

Yet today, Simon Harris – who despite being possibly the worst Minister of Health in history, and no longer actually being the current Minister for Health, still finds the media hanging on his every word – says we are facing a Level 4 lockdown on Monday.

Of course, NPHET, claiming the situation is severely severe, have pushed for level 5 shutdown. Perhaps this is a leveraging tactic to get compliance on a lesser shutdown; perhaps it’s just the intoxication of having so much attention.

The number of cases are ‘soaring’  say NPHET, with the suggestion that this might be the time to panic. Cool your jets though Chicken Little, let’s look at the numbers if you don’t mind.

Since June we have increased our testing in Ireland fourfold – with some 80,000 now being tested per week. Of course you will get more confirmed cases if you increase testing. But there is not a similar surge in either deaths or ICU occupancy. When we take a sober look at the numbers it presents a different picture.

The Irish Examiner showed a useful screengrab illustrating this yesterday. As anyone can see, the increase in confirmed cases is not corresponding to anything like the number of ICU admissions or deaths we saw in April. 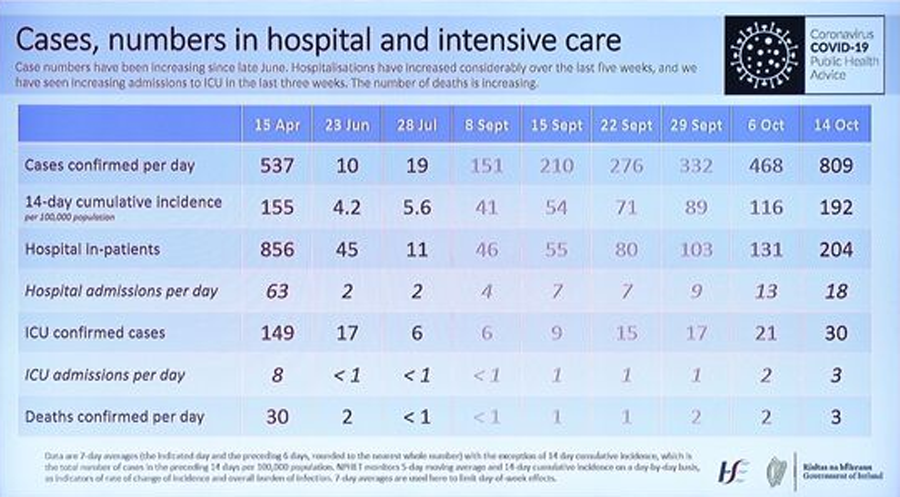 None of this is to say that Covid-19 is harmless or that we shouldn’t do everything we can do to protect the vulnerable. But the current approach is using a sledgehammer to crack a nut and will end up destroying the economy and costing more lives.

Prof Lambert wrote that we need to find “ways to keep the virus at bay, not to count the numbers and to threaten lockdown measures which cause further erosions to our already fragile society.”

“Covid kills directly and Covid kills indirectly,” he warned, saying that the blanket lockdowns have “obliterated many small businesses that could not reopen, and it created mass unemployment in the travel industry at a time when airline staff could reasonably have operated safely over the summer when Covid risk was low.”

“We sacrificed our economy for poorly thought through decisions, made in a void, without appropriate multi-sector stakeholder engagement,” he said.

Many others agree, but of course their voices are often silenced. Project Fear works when doctors like Dr Martin Feeley are sacked for daring to call out the government on their mistakes. How much longer will people accept the message of doom remains to be seen.

Why do (some) liars, cheats, thieves and incompetents get state contracts?