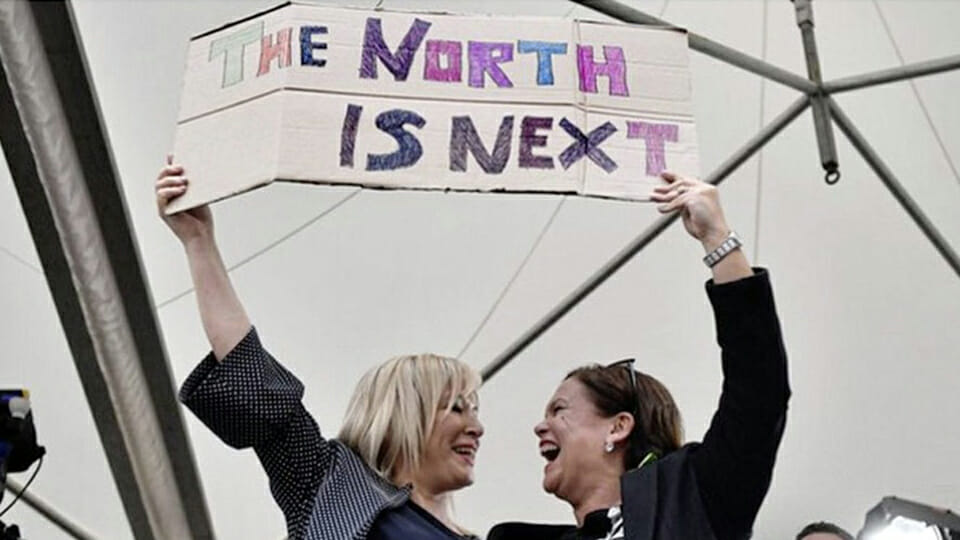 On Monday, attempts will be made to recall the Northern Ireland Assembly at Stormont in a last-ditch effort to stop abortion being imposed on the region.

If the effort fails, the north will see its laws being radically altered by a vote taken at the British Parliament in Westminster – a return to direct rule driven by an obsession with legalising abortion and woke politics.

The Westminster vote, orchestrated by British Labour MP, Stella Creasly, tore-up the right of the devolved parliament in the north to decide on sensitive social issues. It also trampled on the rights of voters, who are, by a significant majority, opposed to Westminster making these decisions.

But what is truly astounding about this return to direct rule is that the shift was backed to the hilt by Sinn Féin, the party whose entire raison d’être has always been an independent and united Ireland free of British control.

In 1801, the Act of Union abolished the Irish Parliament and established British dominion over the country. This denial of self-determination became a rallying point for every Irish political and revolutionary leader from Daniel O’Connell to Patrick Pearse.

It is why, to this day, Sinn Féin MPs elected in Northern Ireland make so much of their refusal to take seats in the British Parliament. In March of last year, Sinn Féin’s Paul Maskey wrote that Westminster “should have no part in governing the people of Ireland”, declaring that “the interests of the Irish people have rarely been the concern of the British government or parliament”.

It was almost unbelievable, then, to see Sinn Féin leaders signing up to a letter organised by Creasy which argued that decisions on abortion should not be devolved – in other words, arguing that this decision should not rest with the people in the north, but instead come under the control of the British parliament.

In doing so, they signed away one of the most fundamental principles of Irish sovereignty, and at the same time brazenly requested the intervention of a parliament that republicans have always considered a foreign power.

For many nationalists, Sinn Féin’s craven entreaty for a return to direct rule feels like an act of treason. People fought and died for Irish freedom. Now Sinn Féin are happy to sign that freedom away in order to see abortion legalised.

The party likes to wrap itself in the green flag, especially when addressing its core voters and idealistic Irish-Americans from whom it so assiduously fundraises. But its request for direct rule from Britain means it can now no longer claim the spirit of Pearse or of Tone who famously insisted that freedom for Ireland meant he strove “to break the connection with England … and to assert the independence of my country”.

This fundamental shift from self-determination is driven by Sinn Féin’s obsession with woke politics. The words “The North is Next” were hastily scribbled on cardboard and held aloft by grinning party leaders at the sickeningly gleeful celebrations of the repeal of the 8th amendment in Dublin Castle last year. Since then, Sinn Féin’s political machinations have concentrated on same-sex marriage and abortion rather than providing housing or healthcare.

Previous votes on abortion at the Northern Ireland Assembly, in 2016 for example, have seen measures to liberalise the abortion law fail. But the Assembly has been stalling since January 2017, effectively leaving the region without a government. Sinn Féin President, Mary-Lou McDonald, and the party’s Vice President, Michelle O’Neill, seized the opportunity to ask British MPs to legislate for abortion in the north of Ireland. It prompted Ulster Unionist, Lord John Kilclooney, to tweet that Sinn Féin were now accepting “direct rule”.

Accepting direct rule may come at a price for the party, however. It has already lost a significant number of members and elected representatives – including two high-profile TDs – in the last few years because of its dramatic shift on social policy.

One of those TDs, Peadar Tóibín, founded a new political party, Aontú, after being forced out of Sinn Féin on the abortion issue. Tóibín says “the objective of Irish unity and independence has fallen down the priority list. Identity politics, abortion, transgender rights, and other issues have been elevated up the policy priority list.”

Aontú councillor for Derry, Dr Anne McCloskey, accused Sinn Féin of “going cap in hand to Westminster to beg English MPs to impose their laws on our lands.”

Tóibín believes the drift from self-determination in favour of woke politics is a reason for the recent vote collapse for Sinn Féin both north and south of the border. The party lost almost a half of its seats in local councils in the Republic.

Polls show the majority of people do not want Westminster imposing abortion on the province. A ComRes poll found that 64 per cent of people agreed that changing the law on abortion should be a matter for the Assembly and not the British Parliament.

Earlier this month, two huge pro-life rallies were held back-to-back in Stormont and in Belfast city centre, where former Police Ombudsman, Baroness Nuala O’Loan, described the Westminster vote as a “denial of democracy”.

Now 27 MLAs from the DUP along with 3 from the Ulster Unionist Party, as well as Traditional Unionist Voice leader Jim Allister and Daniel McCrossan from the SDLP say they will attend the Assembly on Monday to address the issue. Sinn Féin’s Michelle O’Neill branded the planned Assembly sitting as a “stunt” and a “circus”, but everyone knows who the real clowns are.

Sinn Féin are now scrambling to downplay their decision to give up freedom and sovereignty in order to support an unlimited right to kill unborn babies. It may be that they have forgotten what Pearse wrote in The Fool: “Did ye think to conquer the people, or that Law is stronger than life and than men’s desire to be free?”.

Ganley makes RTÉ pay the price for a despicable smear