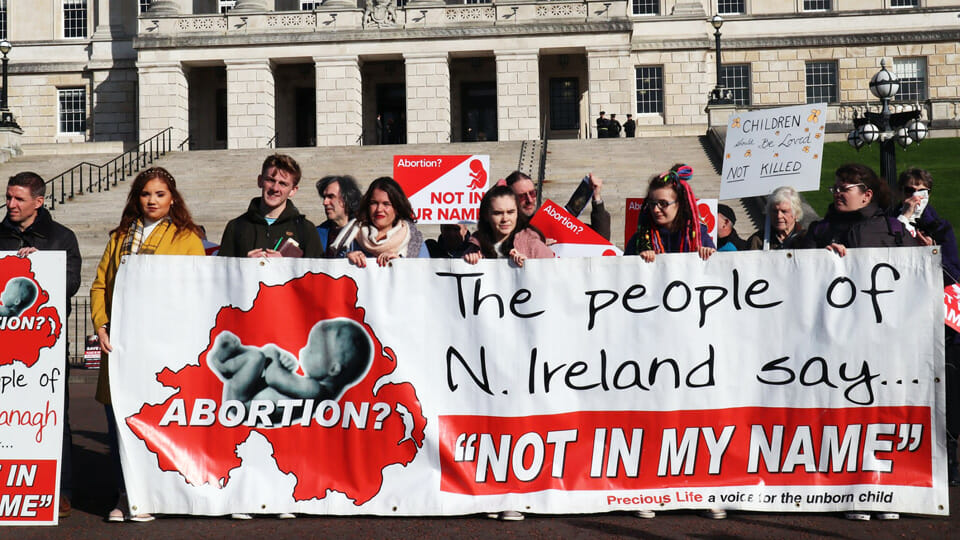 The SDLP have walked out of the Stormont Assembly and stymied an attempt by the DUP to introduce a bill preventing the British government from imposing abortion on the north of Ireland.

Pro-life groups said that while Sinn Féín’s support for the extreme abortion law was already established , the actions of the SDLP were indefensible and a betrayal of pro-life voters.

Unionist parties has triggered the assembly’s recall with a petition last week, and attempted to introduce the ‘Defence of the Unborn Child Bill 2019’ which they hoped to have passed by midnight.

MLAs understood that no Bill could be passed until a speaker was appointed to the Assembly with cross-community backing, which should have been assisted by the participation of the SDLP.

However,  this became impossible when the nationalist SDLP party walked out of the Assembly chamber, forcing the suspension of the sitting.

DUP leader Arlene Foster describing the proceedings as a “shameful day”, while TUV leader Jim Allister says it’s “an exceptionally dark day for one community in Northern Ireland and that’s the community of the unborn”.

Aontú said it was “heartbreaking to see nationalist elected representatives from Sinn Féin and the SDLP refuse to attend Stormont today to prevent the extreme British Abortion Bill”.  They pledged to grow, build and fight for human rights and Irish self determination”.

Northern Ireland’s pro-life laws will be overturned at midnight and a liberal abortion regime will be imposed by the Westminster legislation.

Director of Precious Life, Bernadotte Smyth said, “We thank all the MLAs who did return to Stormont today to make genuine efforts to stop the abortion bill.

What the Sinn Féín and the SDLP have done is utterly shameful.

“Those politicians who are labelling today’s Recall – ‘a political stunt’ – are the same politicians who were happy to welcome the ‘political travesty’ when this undemocratic abortion legislation was railroaded through Westminster in July, breaking all normal rules, procedures and protocols” she said.

“Even regardless of their stance on abortion – if they were truly committed to democracy and devolution, they would be in Stormont today protesting against Westminster forcing ‘direct rule’ on Northern Ireland. This abortion legislation from Westminster is a shameful, cynical betrayal of the Good Friday Agreement – yet MLAs who claim they support and defend the GFA are being exposed by their silence and absence today,” Mrs Smyth continued.

The pro-life leader concluded, “The people of Northern Ireland have fought the good fight and will continue to do so. This is our time, this is our battle. The imposition of abortion will be met with opposition from people throughout Northern Ireland. We will increase our campaigns to ensure women are given better crisis pregnancy support. We will step up our ‘Lobby for Life’ political campaigns, and our ‘Youth for Life’ street outreach campaigns to expose the horrific reality of abortion. The battle to protect our most vulnerable citizens – our unborn babies – is far from over and will continue with even greater determination than before.”