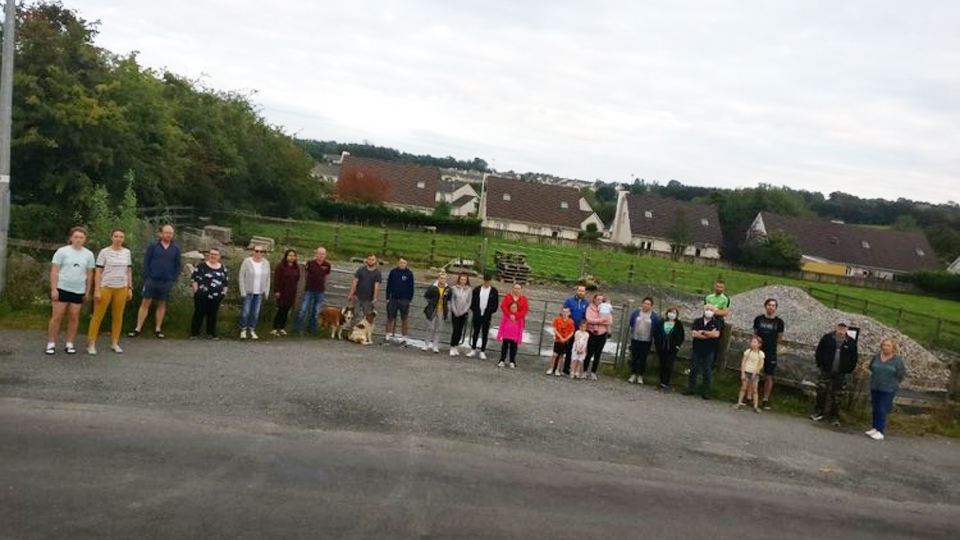 A local residents group in Donegal claim they have not been given a “fair say” after planning permission for a new development was allegedly passed without sufficient consultation.

Residents of Trusk Road in Ballybofey have hit out at Donegal County Council, saying a deal was already done on a proposed housing block in an adjoining field they claim regularly floods and is not large enough for the number of units being proposed.

The site, which is less than one acre, will house a total of nineteen two-storey houses, costing €4.7m to build.

Donegal County Council has informed concerned residents that the development is designated for 22 predominantly elderly residents, but has a total capacity for 76 residents.

A Part 8 Planning Application at Trusk Road, Ballybofey was passed at the council’s Plenary meeting on July 20th, 2020.

Donegal County Council then invited residents to a meeting at the Villa Rose Hotel on Monday July 27th.

A spokesperson for the concerned residents said “Prior to the meeting, council representatives gave residents the impression that the purpose of the meeting was to look at alternative solutions and reach a compromise.

“During the meeting however, the council presented a ‘done deal’ and did not engage in any discussion of alternative solutions, instead indicating that there was a right of appeal to An Bord Pleanala. Subsequent validation of this confirmed that appealing this type of Part 8 application was not possible. The information provided was misleading to say the least.”

Local residents say that it is totally unacceptable the lack of representation they’ve received from their elected councillors.

“Our efforts to convene a special meeting of the Donegal County Council to reconsider their July 20th decision failed. It was necessary to get six council member signatures but only 5 of the 37 elected Donegal councillors supported us.

“The remainder either did not reply when contacted or advised us that their party had directed them not to support us. However, we would like to take this opportunity to express our sincere thanks to the five councillors who did.

“It was interesting to note that 5 out of our 6 local councillors failed to communicate our concerns or issues but instead seem hell-bent to force through this development.”

Correspondence was also sent to senior officials in Donegal County Council. However, the group says that to date they have not received any formal response.

“As residents of the area, we are not against a well-integrated development on the site at Trusk Road and we are happy to see much needed social housing developments proceed.

“However, any development must adhere to the existing guidelines and comply with the precedent already set by Donegal County Council.

“With so many legitimate concerns, a number of incomplete local developments as a constant reminder of incorrect policies, and given the severe disruption and ensuing future uncertainty caused by the COVID 19 pandemic, a more comprehensive engagement earlier in the consultation process, at the appropriate time could have led to a more mutually acceptable project.”

In a message seen by Gript.ie, one resident was incorrectly promised by local councillor Gary Doherty that they could appeal the Part 8 planning application to An Bord Pleanála, a claim the councillor says was a genuine mistake on his part.

“That would have been my understanding, it’s unfortunate that that doesn’t seem to be the case. I tried my best to understand the residents’ concerns to see if we can come to common ground, but unfortunately that proved impossible,” he told The Journal.ie.

Cllr Doherty said there was “absolutely no intention to mislead anybody”.

A spokesperson for Donegal County Council said the units, which are intended for senior citizens, are badly needed and will “help address the existing social housing needs of the Ballybofey/Stranorlar area.

“Additional space has been designed into the units to accommodate caring, family and medical supports for residents as they age. The development has been designed in line with best practice for an aging population and aims to provide sustainable, long-terms homes to meet the needs of older people in a community setting for people aged over 55 years of age,” a spokesperson for the council told The Journal.ie.

“The residents will benefit from a communal space which will enable group activities, events and provides a shared space where older people can meet and socalise with the aim of combating loneliness and isolation.”

The decision by the council to grant permission for the social housing units can only be challenged by judicial review in court, a step residents say is too costly.

“The cost was the deciding factor. We were prepared to pay for [an appeal via ABP] and any consultation involved, but there is no way we could possibly afford a judicial review,” a residents’ spokeswoman told The Journal.ie.

Gardai to public: Stop sympathising with the bereaved, or else