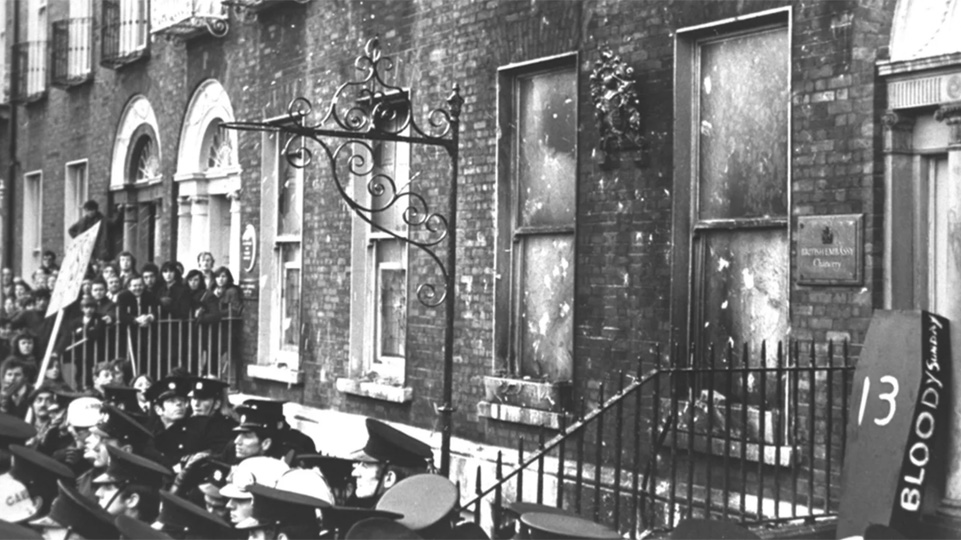 On 30th January 1972, British Parachute Regiment shot dead civilians in a civil rights march in Derry city. It sent shockwaves through Britain and Ireland and people south of the border were angry and distraught.

The first night 50 people picketed the British embassy, but on Monday morning walkouts took place at factories in Shannon and Cork, followed by thousands more in Limerick, Galway, Dundalk and Waterford. Impromtu marches were taking place in many cities with protesters passing each other. In Dublin, the protesters converged on the British embassy and an attempt was made to storm the building; Gardai dispersed the crowd after baton charges.

The next day, Tuesday, the Irish government withdrew their ambassador from London and announced a National Day of Mourning the following day to reflect the anger and disbelief reflected in public opinion to the news of the shootings.

Schools were closed, RTÉ provided live coverage from the funerals of those shot dead, trade unions asked their members to take time off work to attend memorial events and employers facilitated this. National Organisations and associations either closed down for the full day, part of the day and donated funds to the victims families. Dockers blacked British ships; airport workers refused to services British aircraft; massive protest marches were held from Sligo, Tralee, Wexford, Dungarvan and other towns; memorial marches and events were held in towns and villages. Bus strikes were called in Cork and in Dublin the protests continued at the embassy.  An explosion destroyed the building’s armoured door, while over 70 petrol bombs were thrown at its reinforced windows. After several hours of clashes, with injuries on both sides, the Gardaí prevented further damage taking place.

On the day of the funerals, Wednesday, many politicians travelled to Derry to pay their respects, a memorial service was held in Dublin’s Pro Cathedral which was attended by Taoiseach Jack Lynch and most of the Fianna Fáil cabinet. Other religious services where held throughout the country and many people in Dublin went to specially held early morning mass before making their way into protests in the city centre – some to the embassy and some to the protest March which set off from Parnell Square.

By the afternoon, approx 100,000 had gathered and made their way to the embassy, petrol bombs were thrown at the door, a number of men scaled the embassy wall, one raised a tricolour at halfmast. Windows were broken, cars over turned and by  7pm the embassy was on fire and thousands watched it ablaze. The gardai restored order, baton charging the crowd. There were smaller protests over the next few days but nothing on the scale of the first few nights.

Look at this BBC report from the time

ON THIS DAY: The last words of Éamonn Ceannt, 1916 leader