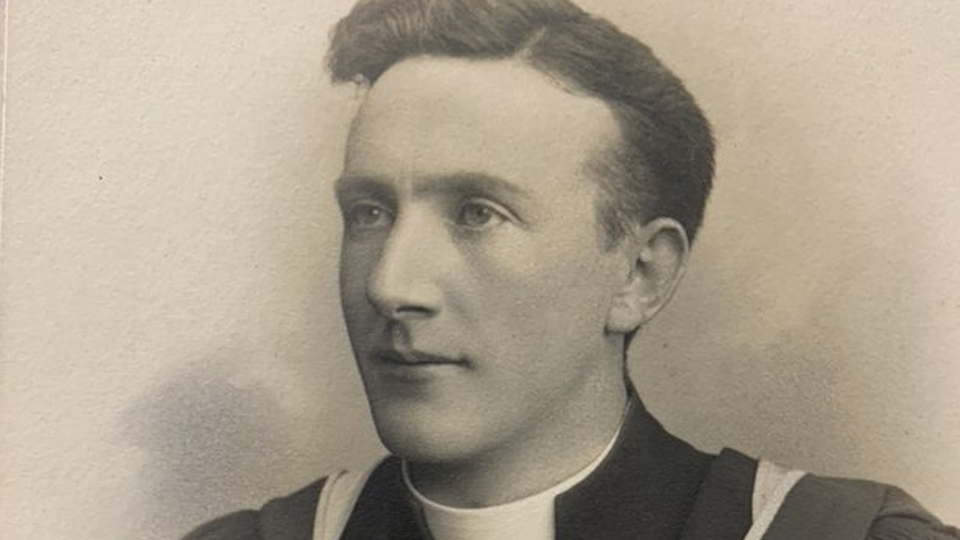 On this day in 1920, the body of Fr Michael Griffin was found dumped in a shallow grave in Cloghscoltia near Barna in Co Galway. The popular priest,  who was serving in the parish of Rahoon was known as being a zealous supporter of the republican cause and was believed to have been targeted because of his beliefs by the Crown forces. He had been shot in the head

The Auxiliary Division of the RIC were widely believed to be responsible for the kidnapping and murder of the priest. The Auxies descended on the city and county of Galway during 1920 with increasing violence and fury against  the local IRA and on civilians. They were widely held to be a lawless and vengeful force, often acting as if they would never be held accountable for their actions. Many, of course, never were.

Officer Frank Crozier, commander of the Auxiliary Division of the Royal Irish Constabulary, wrote in his memoirs ‘Ireland Forever’  that Fr. Griffin had been murdered by cadets in the division, and that a plot was also afoot to murder Dr. Michael Fogarty, Bishop of Killaloe.

“I found out that the military inquiry into the murder of Father Griffin (held in lieu of an inquest) was fast with a ‘frame up’ and that a verdict of murder against persons, or somebody ‘unknown’ would result. I told the military commander this and the name of the real murderer, but was informed that a senior official of Dublin Castle had been to Galway in front of me to give instructions as to ‘procedure’ in this murder investigation. At Killaloe next day I received further evidence that the hidden hand was still at work, and was told in confidence that instructions had been received to kill Dr. Fogarty, Roman Catholic Bishop of Killaloe, by drowning him in a sack from the bridge over the River Shannon, so as to run no further risk of detection by having his body found,” he wrote.

What made Fr Griffin a marked man was his obvious sympathies for the republican movement and support for the government elected after the 1918 election. In the month before he was kidnapped he was called out to attend to Seamus Quirke, a First-Lieutenant in the local IRA who was dragged from his lodgings and shot eleven times by the Auxiliaries. Fr. Griffin stayed with him until he died.

The priest also took part in the funeral of Micheál Walsh, a Sinn Féin Councillor who was taken from his premises, the Old Malt House in Headford which was also looted and robbed, before being shot in the head and dumped in the river on October 19, 1920.

In addition, a local  teacher named Patrick Joyce had been kidnapped by the IRA under the orders of Richard Mulchay who believed he was an informer, and the Auxiliaries, believing that Fr Griffin knew what had happened, were bent on revenge.

Little is known about how he was taken from his home at  the curate’s presbytery on Mountpelier Terrace on the night of Sunday, November 14, at approximately 11.40pm. A neighbour later testified that he had heard knocking like the sound of fists on the door, which intensified as if the butt ends of revolvers were being used. He was not seen from that time by his parishioners or friends until his body was found in the shallow bog grave on November 20th

The Galway Observer in its Nov 27th report on the shocking events wrote that:

“The terrible anguish and anxiety which prevailed in Galway all last week since the disappearance of Fr Griffin, were laid to rest last Sunday morning when the announcement was made from the altar at the early Masses in all the chapels, that his dead body was found. The simple mention of the recovery of his body was a source of relief to many, even while most people were stricken with grief at the astounding intelligence, and many gave way to tears and prayers for the repose of his soul.”

They relayed that “on Sunday morning, with tears streaming down his face, [Fr O’Meehan, a fellow curate ] told the tragic truth. “Little I thought when I was talking to you last night.” he said, “that I should witness the dead body of my comrade thrown into a bog-hole by the road-side.”
The paper continued with Fr O’Meehan’s narrative: .

“It was about half—past seven he said, when the messenger arrived. Up to then we had hopes that Fr Griffin was alive and safe, as no one thought anyone would be found so iniquitous as to do to death a priest who had never done conscious wrong to anyone.”

“Accompanied by Rev Joseph Mitchell, M.A., President St Mary’s College ; Rev Andrew Sexton, a professor in the college and a class fellow of Fr Griffin, as well as the messenger I proceeded to the scene. By the light of a lantern, and with the assistance of men with spades and shovels, we scraped the earth carefully away. The boys were too awed to touch the spot till we came. We put the horse and car in a house nearby so as not to attract undue attention, and proceeded with our melancholy search.”

“It was a scene that I shall never forget. The moon lit up the landscape occasionally through scudding clouds, and out at sea the Margureita buoy moaned persistently. Presently one of the boys who was down in the mud searching carefully with his hands, speaking almost in a whisper, said, ‘I have found a priest’s collar, Father. Here is poor Father Griffin’. I put my hand down and laid it on the collar of my beloved comrade.

“One of his eyes were open. There was an agonised expression on the face, and an expression on the mouth as if he was framing a protest against their requests.” The men drew away and there was a suppressed moan, followed by a groan of indignation and horror.”

“In God’s name, be calm, boys” I begged. Fr Griffin is far better off than any of us, for he is in heaven. I knew him to be a saint.”

“Slowly, without another word being spoken, for all were too moved to speak they removed the wet and boggy soil. The body of Fr Griffin lay, with the feet facing Galway, covered with about two feet of soil. The narrow grave – if grave it would be called – ran parallel to the rubble wall. The body was clad just as it had left the house on Sunday night, but we could not find his hat. We had the body taken up on the dry soil, and one of us rubbed away the grime and mud from the face. We then recognised him beyond doubt. We had the body removed to a place of safety, cleaned and attended to. It was guarded through the night by a number of his parishioners, and taken in here at seven o’clock on Sunday morning.”

“I would like to add”, continued Fr O’Meehan, speaking with emotion, “that he has been my colleague and comrade for nearly two years and I can say from my heart that I have never at home or in foreign lands met or associated with a nobler character, a truer soggarth or a kindlier friend. His death under such circumstances will have a greater effect upon the conscience of the civilised world than even the martyrdom of the late Lord Mayor of Cork. May God have mercy on the murderers of the most innocent and child—like man I have ever known.”

“The dead priest was only twenty-seven years of age. His enthusiasm for the Gaelic language is revealed by the fact that he could not speak a word of Irish when he left Maynooth three years ago, and became a fluent speaker in the interval. He was extremely fond of children and distributed money freely to the little ones in Munster—lane. He always seemed happiest when he was amongst the poor.”

The paper also reported on what it called “Heart Rending Scenes in the City Churches”.

“The scenes witnessed in the Galway Churches on Sunday morning when the announcement was made of the finding of the dead body of Father Griffin are probably without parallel in the history of Ireland for over a century. A shudder of horror passed through the congregations. Women and even men sobbed aloud. Little girls and children wept as if their hearts would break. People were to be seen in tears on the street. The ordinary salutations were put aside.”

“After the Gospel, Very Rev Peter Davis, Adm, did not preach the sermon that is customary at last Mass, but came forward on the altar steps, and in a firm voice began: “There is great sorrow in the parish today, sorrow in which you and I will equally share. The body of Father Griffin with a bullet through his head was found last night.”

“At this point a shudder of horror passed through the congregation, followed by a moan of agony that swept through the church like a thornily of woe. Then audible sobbing was heard; and Fr Davis proceeded with a choke in his voice:

“You knew Father Griffin as a zealous priest, a thorough gentleman — an overgrown boy, that is what he was. I cannot bring myself to speak to you, because I feel it too much. All I can do is to recommend him to your prayers. I am sure he has earned the martyr’s crown, because in all probability he went to attend a sick call and consequently he died doing his duty. Jesus Christ, Our Lord and Master, did not grudge his life for the salvation of the world. Let us therefore, pray as He prayed. ‘Father forgive them. They know not what they do.’ And, brethren, I will ask you of your charity, with the shadow of the great tragedy hanging over the parish, to pray to God for the repose of his soul, and that you will not forget to pray for those who murdered him. May the Lord have mercy on his soul and forgive them.”

“Father Davis was unable to proceed.”

On November 23, Fr. Griffin’s funeral mass took place at St. Joseph’s Church, Presentation Road. The funeral cortege moved through the streets of Galway, with three bishops, 150 priests, and in excess of 12,000 mourners participating. The priest was buried in the grounds of Loughrea Cathedral.

Sally-Ann Barrett has a fascinating podcast/documentary series on his life and death on Galway Bay FM. Have a listen