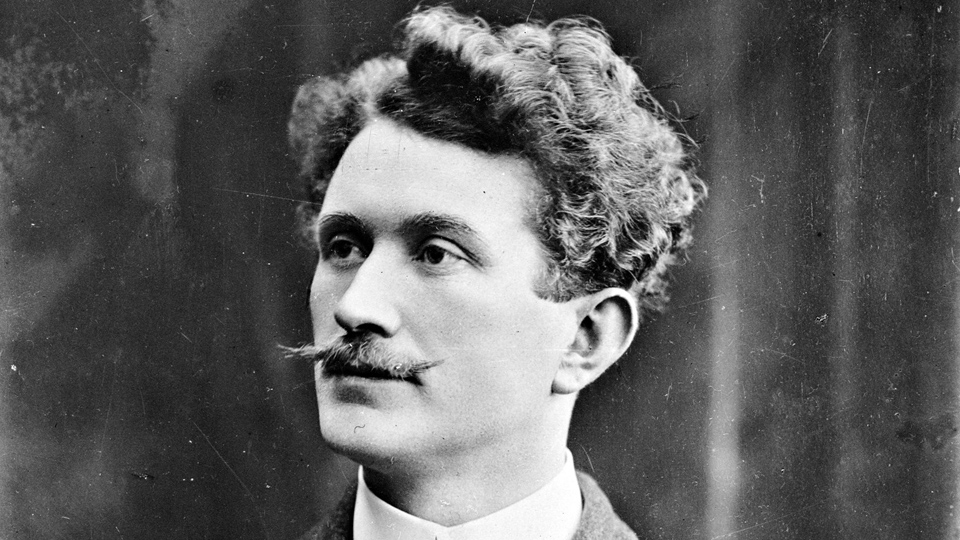 Thomas Ashe trained as a teacher and worked as a school principal in Lusk, Co. Dublin. He was a poet, piper and talented singer and having being reared in the Gaeltacht in Kerry, was an avid supporter of the Irish language. This brought him to the governing body of the Gaelic League, he was also a member of the Irish Republican Brotherhood and a founding member of the Volunteers.

When the Rising broke out in Dublin in Easter 1916, Ashe was in command in stages to Ashbourne, Co Meath. Although largely outnumbered, he and the volunteers under his command managed to defeat armed RIC troops and capture four police barracks and large quantities of arms and ammunition. When the Rising ended, Ashe and his men surrendered on the orders of Pádraig Pearse.

On the 8th May 1916, Ashe was court-martialled and sentenced to death, this was later commuted to life, and Ashe was sent to a variety of English prisons. He was released from jail in June 1917 under the general amnesty which was given to republican prisoners. Upon his release, he returned to Ireland and in August 1917, he was arrested and charged with “speeches calculated to cause disaffection”. He was sentenced to one year’s hard labour in Mountjoy Jail.

Ashe, along with Austin Stack, who was also in Mountjoy demanded to be treated as prisoners-of-war. Having been deprived of a bed, bedding and boots Ashe went on hunger strike on 20th September 1917. On 25th September 1917 he died from pneumonia, which was caused by force-feeding by the prison authorities. He was 32 years old.

His body lay in state at Dublin City Hall and his funeral was followed by 30,000 people, led by armed Volunteers in uniform as it made its way to Glasnevin Cemetery. It was the first public funeral after the Easter Rising of 1916. Michael Collins gave the graveside oration. His death marked an increase of significant support for the republican movement.

After his death, thousands of copies of “The last poem of Thomas Ashe”, which he wrote in Lewes Jail, England, were circulated.’ Let me carry your cross for Ireland, Lord’…contained a prophecy that did not come true… “And few are the tears will fall for me….When I go on my way to you.”

‘Let me Carry your Cross for Ireland, Lord’
By Thomas Ashe

Let me carry your Cross for Ireland, Lord
The hour of her trial draws near,
And the pangs and the pains of the sacrifice
May be borne by comrades dear.

But, Lord, take me from the offering throng,
There are many far less prepared,
Through anxious and all as they are to die
That Ireland may be spared.

Let me carry your Cross for Ireland, Lord
My cares in this world are few.
And few are the tears will for me fall
When I go on my way to You.

Spare. Oh! Spare to their loved ones dear
The brother and son and sire.
That the cause we love may never die
In the land of our Heart’s desire!

Let me carry your Cross for Ireland, Lord!
Let me suffer the pain and shame
I bow my head to their rage and hate,
And I take on myself the blame.
Let them do with my body whate’er they will,
My spirit I offer to You.
That the faithful few who heard her call
May be spared to Roisin Dubh.