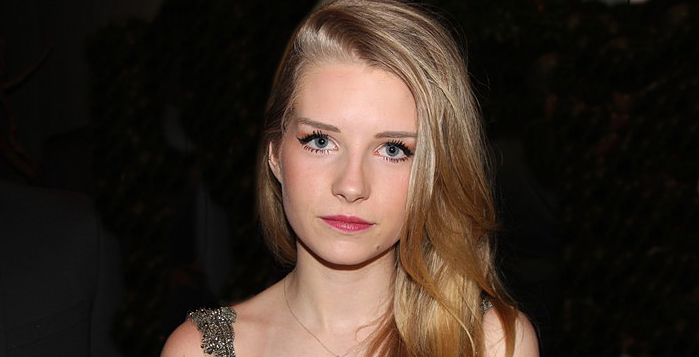 Well, look, whatever, eh, melts her butter, I suppose:

British model Lottie Moss has revealed that she is pansexual.

During an Instagram Q&A on Monday, Moss — who is the younger sister of supermodel Kate Moss — responded to a follower asking if she would prefer to date a woman.

“I’m pansexual so I don’t really mind any gender,” said Moss, 22, according to the Daily Mail. “It kinda changes every day as well. It depends on who I meet.”

She also confessed the meaning behind a tattoo on her behind that reads “Not Yours.”

“I was dating a guy and he really pissed me off and I went and got a ‘Not Yours’ tattoo to say, ‘F—k you,’ and now we’re broken up,” she explained.

What’s a pansexual, you ask? Well, we’re here to educate you.

A pansexual, it turns out, means “not limited in sexual choice with regard to biological sex, gender, or gender identity.”

How is this different from say, a bisexual? Well, apparently a bisexual is attracted to both men and women. A pansexual is also attracted to men and women, but also to trans-women and trans-men, and any other configuration of bits and pieces that you might imagine. Luckily for the contents of Ms. Moss’s kitchen, it has very little to do with actual pots and pans.

Pansexuality is a relatively new phenomenon in human evolution, it turns out. Searching Wikipedia for a list of people who have identified as pansexual returns only 33 individuals. The oldest was born in 1960, but only five of the thirty-three were born before 1980. Twenty of them were born in 1987, or later. Ms Moss, born in 1998, when she’s added, will make it 21 of 34.

In other words, if you are my age, or older, it is literally true that there were no pansexuals floating about the place when you were growing up.

Interestingly, there are no Irish pansexuals yet, at least not ones famous enough for a Wikipedia article. Somebody in UCD’s gender studies department should really put in for a grant to find out why that is – no doubt generous funding would be made available.

Anyway, why was there a need for a new word? Well, I wondered that too, so I went to Wikipedia again to try and answer that question for you, the readers:

Now, hopefully that’s cleared that up for you. Before you read it, you may have been thinking “John, these people are mad”. Now you have read it, you are more educated and enlightened about the oppressive nature of bisexuality and how it erases the visibility of genderqueer people.

The great question of our time, though, is how replacing bisexuality with pansexuality as a concept deals with the other significant problem of our era – bisexual erasure.

Anyway, that’s a matter for another day. For now, you’ve been reading Gript Media, and this has been your weekly lesson in woke lefty nonsense.