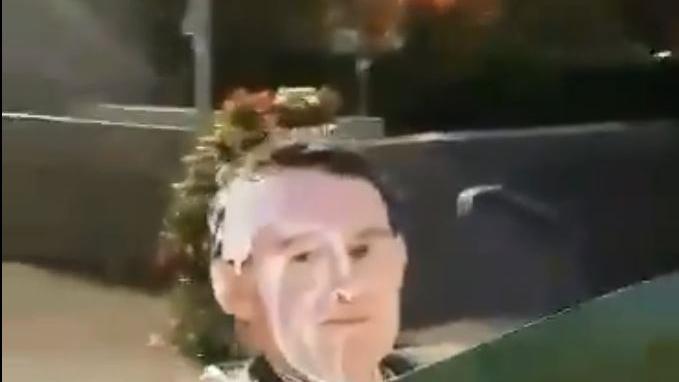 Isn’t it ironic that those who would speak so passionately against fascists appear to think it’s acceptable to engage in violence to suppress views they disagree with?

When I first saw the footage of National Party Leader, Justin Barrett, dripping with vanilla milkshake as he held a banner that read “Ireland belongs to the Irish”, I thought it was something that he was not beyond deserving given his reported links to actual fascists. But I quickly realised it was wrong. And so should you. Vanilla may be a more accurate description of those wielding the milkshakes than of the common flavour itself. What we saw take place in Eyre Square last week was, in my view, a test of the extremes on both the left and right. On one side you had Barrett and his merry band of ‘patriots’ who often stray into the realms of blatant racist rhetoric while on the other you had far-left thugs like Joe Loughnane. You might think its unreasonable to call Loughnane a thug, but his criminal record and violent history justifies it as exposed by Gript’s Gary Kavanagh.

To observe which side engaged in violent tactics is telling. It’s almost as if the tactics of the blackshirts in Italy and the brownshirts in Germany through the 20’s and 30’s are being employed by our modern day ‘anti-fascists’. Tactics like the sustained attacks on “wrongthink”, the protest and disruption of speakers and events they disagree with, and the declaration of success if they get the event shut down and the speaker silenced. And, of course, this new craze of milkshaking – seeking to publicly assault, demean and humiliate those who offer a different point of view.

What exactly is freedom of speech? It is the right to express any opinion without censorship or restraint. ANY opinion. It is indicative of today’s society of “tolerance”, “respect” and “inclusion” that those values appear to only run so far. As soon as you stray outside the acceptable set of dogmatic views, you become a pig for the slaughter!

It is a real challenge for the left to explain what counts as a fascist today. Bearing in mind that the original national socialists of Germany were responsible for the butchery of millions of people, the creation of one of the most effective police states the world has ever seen and the brutal repression of dissent – not to mention waging one of the bloodiest wars the world has ever witnessed. Today, what the progressive brigade count as fascist is nothing more than someone who refuses to tow the line.

The progressive left has eroded discourse and believes itself to be the moral champion on all issues so therefore any and all debate must be limited to what they deem to be acceptable. That is not to say that modern day fascists do not exist, of course they do.

But they can easily blend into the crowded masses of those labelled by the intolerant thought police as fascists and so, they become more potent than ever. Capitalising on the frustration and anger of those shot down by the morally superior blue haired brigade who in turn, become susceptible to the more extreme ideas of the fascists and extremists that reside in the shadows.

Well done to the left. Through their tactics of intolerance, milkshaking and character assassination, they are responsible for otherwise harmless individuals adopting a more extreme position. They galvanise the words once uttered by a wise man – “Our lives begin to end the day we become silent about things that matter” – Martin Luther King.  – Standing up against the violent repression of freedom of speech matters more for democracy than almost anything you can imagine and that is why I say, do not milkshake fascists! The antidote to terrible ideas is better ideas. Put a fascist on a platform, let them spew their hateful nonsense and then let us all defeat it with our own, better ideas, because we as a society is more than capable of doing so.

The most effective way to defeat speech you disagree with is with MORE speech, not by attempting to silence it. The left will do well to remember that.