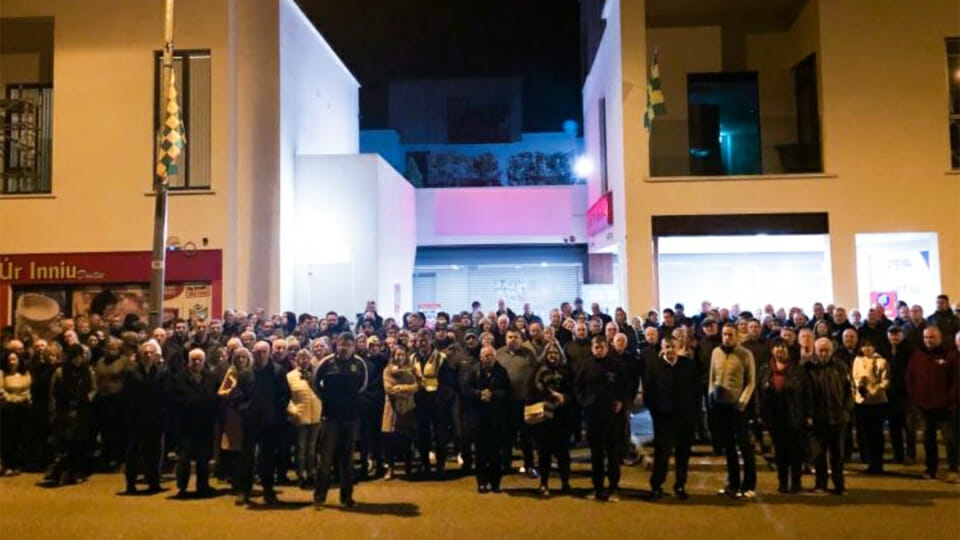 Residents of Ballinamore standing outside of The Rock Quarter in Ballinamore on Sunday, 20th October

The government’s policy of choosing to rehouse migrants and asylum seekers in small Irish towns without consulting local communities has backfired badly.

Ballinamore is the latest town to begin round-the-clock protests to stop what they described as the “resettlement” of refugees and migrants being foisted on the town without consultation.

As reported on this platform, last week the people of Ballinamore were told that up to 130 refugees and migrants would be given accommodation in new apartments in the town, with 100 people arriving within two weeks.

Just 914 people live in the small Leitrim town, and the meeting heard anger and upset from the locals at the high-handed attitude of the authorities.

Local woman, Mary Conlon, told Shannonside Radio that she thought at first that the meeting would be part of a “genuine process of consultation”, but  “it turned out not to be that, because the contracts had been signed yesterday and we were told the new residents would be arriving in two weeks time.”

Just days later in Borrisokane, a packed meeting also heard that the unannounced arrival of migrants and asylum seekers in a town of 700 people was a ‘done deal’.

Locals expressed anger at the secrecy surrounding the decision and warned the government’s actions were causing fear and opposition to build.

“The reason we have people in this room tonight is the fear. It could be real or unjustified, but there’s a fear here. We’ve a basic right to know who’s coming to our town and where they’re coming from. We don’t know who these people are and we’re afraid. It’s not that we don’t want them, it’s that we want to know who they are. Once we know who they are, they’re more than welcome,” the meeting heard.

Tipperary TD Mattie McGrath said that it was now clear that the a deliberate policy of “non-engagement” was the Department’s new policy on direct provision.

“It is now absolutely clear from the experience of communities across the state, that a conscious and deliberate policy of non-engagement with locals has become the departments de facto position on direct provision. This, more than anything else, will emerge as the primary motivator of peoples fears and concerns. Communities have a right to have their concerns addressed prior to, and not after the fact. It is appalling to witness the disregard for communities that the Dept is encouraging,” he told Gript News.

Deputy McGrath is entirely correct. After opposition from the local community in Oughterard halted plans for a direct provision centre, the Department clearly decided that stealth and non-consultation was the only way to ensure small rural towns would be unable to object to enormous changes being imposed on their communities by an increasingly Dublin-centric government.

The bad news for Minister Charlie Flanagan is that this policy is backfiring badly. A follow-up meeting was swiftly organised in Ballinamore Sports Hall on Sunday last attended by some 350 people. They issued a statement calling on the Department to halt the rehousing proceedings immediately, to “listen to the people of Ireland” and “re-evaluate its policies on provision centres across the country.”

Furthermore, they added that “the wealthy investors who back these projects and supply social infrastructure to the state have no concern for either the people in provision centres or the communities in which they are placed. The people of Ballinamore were the last to know of this proposed relocation and were informed of the plans after a contract was signed between the developer and the Department. There has been no public consultation on this matter whatsoever. The deal was done and then the people were told.”

They also pointed out that “proportional norms, when it comes to the resettlement of refugees or asylum seekers, is recognised as being between 1 and 2% of population. The numbers being considered for Ballinamore exceed 15%.” 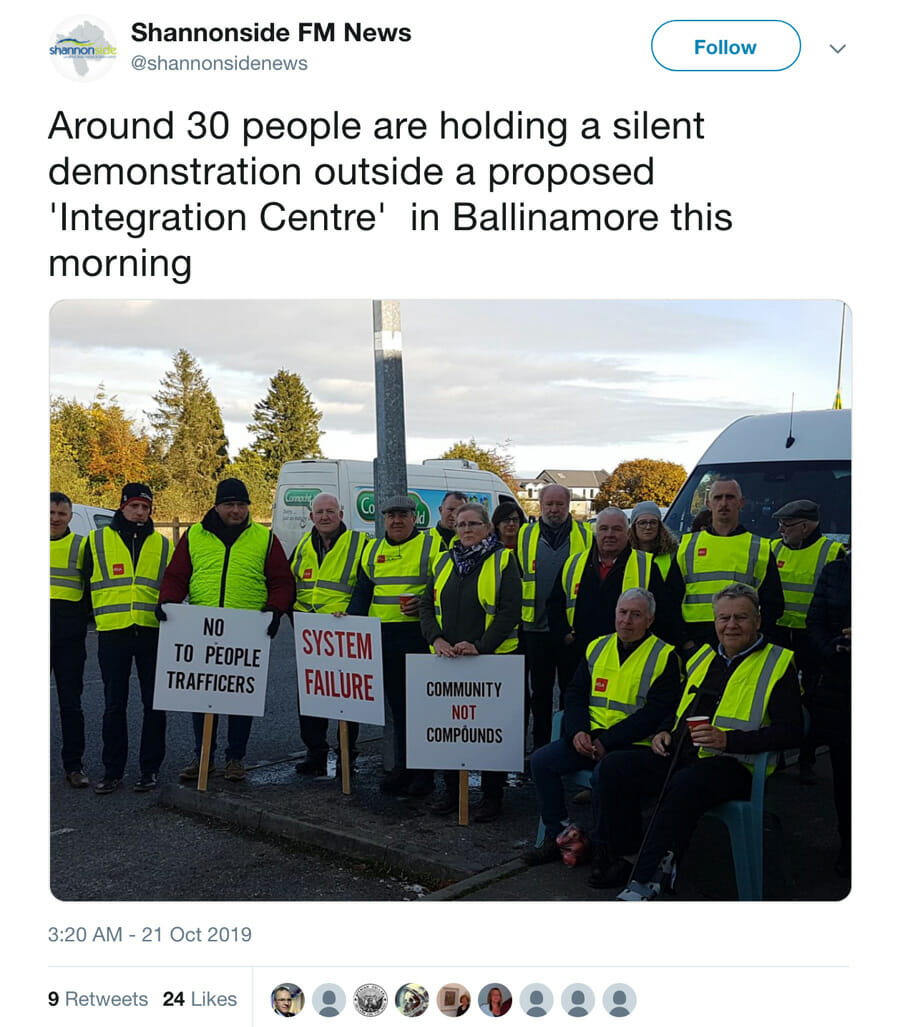 At the demonstration in Ballinamore locals are carrying signs comparing direct provision to human trafficking and slamming the government for “System Failure”.

A sudden increase of 130 people would be the equivalent of an extra 3,000 people in Sligo, or 30,000 in Limerick city or 187,000 in Dublin, the meeting heard. As I previously noted, the elites who are happy to force rural communities to bend to their will are not making the same sacrifices themselves. There are no direct provision centres in Dalkey or Donnybrook.

Until now it has been impossible to have a reasonable or informed discussion about immigration in Ireland, due to the hysteria and name-calling of the left, and the groupthink and virtue-signalling of the media. But now the people most effected by the chaotic and unfair policies of the government have had enough. Charlie Flanagan may yet be forced to listen.

Election posters: Stop complaining about them.