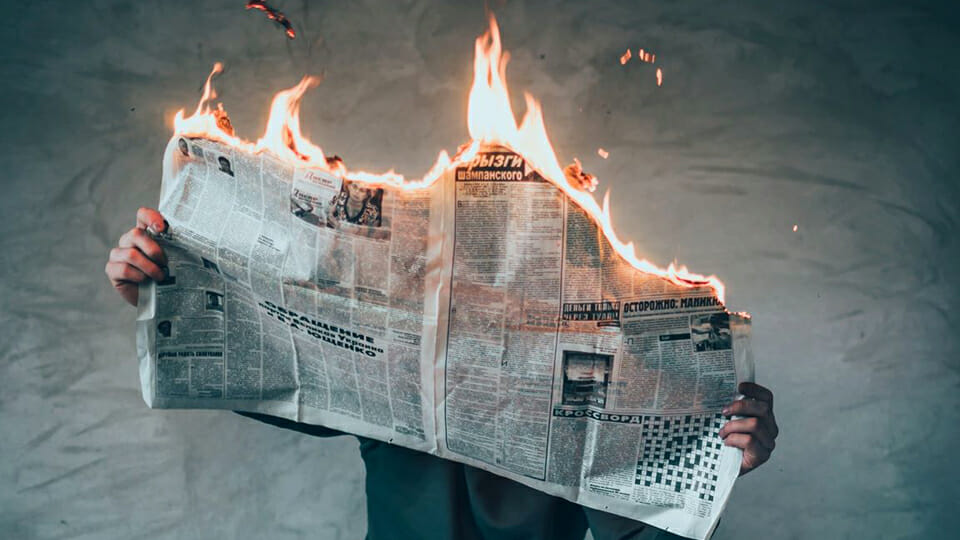 In a debate in the House of Commons, Edmund Burke is  documented as saying: “there were Three Estates in Parliament; but, in the Reporters’ Gallery yonder, there sat a Fourth Estate more important far than they all.” The Fourth Estate – the press – were meant to be a light to expose the truth, to oppose the government in the people’s interests, to report the truth – not the spin. It is apparent now more than ever that Ireland is in dire need of a Fourth Estate.

This might sound like an odd statement given the number of media outlets and publications in the country. However, the mere existence of outlets and publications does not satisfy the criteria for a Fourth Estate. What is needed is a press that actually challenges the government and institutions in our society, not form an elite oligarchy with them…

There is an overly close connection between the Irish press and the institutions and government they are meant to challenge.  A revolving door exists between the corridors of power, and the upper echelons of the Irish media. An establishment of sorts has developed whereby the Irish government and Irish media work in situ to foster certain sentiments or to push a certain message. You could be mistaken for thinking that certain outlets were state-owned.

There are those who dare to dissent and challenge the powers that be, certainly David Quinn, Breda O’Brien and Ivan Yates would come to mind in that regard! And of course, there is this publication which dares to challenge the engrained status quo. However, I ask you, out of the fresh faces in the Irish media – who challenges the government? Who grills the government? Who is not afraid to burn some bridges to tell the truth, and not just offer some clever insight after the fact once the risk is gone? I’d imagine very few come to mind, and those that do only do so after a great deal of thought.

Many of the current lot seem to be involved in some deification of Leo Varadkar. Two have written a book which is so fawning in its coverage of Leo Varadkar that it might as well have been an official Fine Gael publication. Another wrote a book on the downfall of Enda Kenny and the ascension of Leo to the top job. Sadly, this is the Irish media, a cabal of talented journalists dedicated to protecting the establishment. Think back to coverage of Brexit, Trump, Covid-19, the 8th Amendment Referendum, or Boris Johnson – has there been any discrepancy between the coverage of these issues by the Media and the comments by the powers that be? Therein, lies the problem – there is negligible difference, if there is one.

To focus on the coverage of Leo as an example. An Taoiseach has been the frequent subject of glowing coverage be it signing up to do one day a week as a doctor during the pandemic or for his polished speeches. As a coalition was being formed, media coverage has turned to sniping at Michael Martin and Eamon Ryan yet the most distinctive piece of coverage of Varadkar has been that he regrets having to leave an Taoiseach’s office – albeit temporarily. No mention of broken election promises, capitulating to the Greens, or selling it to the FG base – merely a ‘he will miss serving the people…’ Some even lobbied for Leo to go to the country, just so we could have more of em…

Yet this is a Taoiseach who has gone out of his way to avoid responsibility. Varadkar was largely in absentia throughout the Brexit negotiations – delegating responsibility to Simon Coveney before swooping in to take credit for Coveney’s success. The qualified doctor then made sure Simon Harris carried the can for the government’s record on healthcare. Similarly, Eoghan Murphy was chosen to be the sacrificial lamb to take the fall for the housing crisis to protect the deity that is Leo. The coverage has been to distinguish the cabinet ministers from the man leading the cabinet. He appointed these Ministers to these portfolios, so he is by extension responsible for their failings. Why doesn’t the coverage reflect this? Cabinets are bound by the doctrine of collective responsibility for decisions taken at cabinet, why does the Varadkar Administration suddenly get an exemption? He quoted Mean Girls in a speech about the devastation of Covid-19, to win a bet with a Hollywood celebrity. The Media lauded the pop culture acumen of Leo, as opposed to criticising the crassness of his actions. As the Irish public are in the dark over the return of schools, the recommencing of cancer screenings, the future of the childcare sector – McHugh, Harris and Zappone take the pounding, whilst Leo models new masks…

Then there is the fact the establishment parties of FF and FG enjoy distinct privileges and receive special treatment in the run up to the election. In the leaders’ debate, only Michael Martin and Leo Varadkar were featured even though Sinn Féin were polling very close to both, and in the end took 37 seats. The message was clear, an Taoiseach could only be from FF or FG. In the subsequent debate, Aontú were excluded from the expanded leaders’ debate even though they had similar polling numbers and elected reps to other parties. Then in the February 6th debate, neither SF, FF nor FG participated in the debate with smaller parties, and the Deputy Leaders’ debate confined to SF, FF and FG. Media coverage was overwhelmingly dedicated to both FF and FG, how big an issue Brexit would be on the doors, and who would be Taoiseach – Michael or Leo. In the end, SF took 37 seats and took the highest number of first preference seats, Brexit was a non-issue, and it took 130 days for FF-FG to come together to stop SF and make both Michael and Leo Taoiseach (one after the other of course). So in spite of the bias, the FF, FG and Media establishment got a rude awakening from the Irish people.

It seems the censorship of dissent or diversity of opinion is not confined to mainstream politics however. In the attempted public lynching of Killian Foley-Walsh, the media rounded on a young man who deigned to attend a conservative political conference – one I was proud to attend alongside him by the by. Public decency went out the window, the Irish Examiner said he had commonality with school shooters, another journalist told him in her article headline to sit down and shut up (how fascist of her), whilst FG liberals called for his head. Where was the objective reporting of the story featuring both sides or a call for civility? Also, why is it that the actions of a 20-something year old guy were of such concern to the media that the news cycle was dominated for weeks with vilifying them? Are the establishment that insecure they need to purge dissenters from the younger generations to ensure ideological purity? If the Irish media were a serious entity, this would not have been news – but they made it news because it threatened their hold on the establishment. Hate to break it to them, Sinn Féin are the biggest threat to their cosy little cabal at the current time and are coming with a sledgehammer.

The Fourth Estate is meant to cover all viewpoints, and publish the diversity of viewpoints intrinsic in any society – not be a vehicle for the pre-approved establishment viewpoints. How can real change come without debate? How can real decisions be made and democracies flourish without the fair presentation of all options by the media to the people? What does it say about the West that the media rank in the gutter alongside politicians in terms of public popularity? The Irish people have grown weary of the political and media echo chamber determined to beat them into submission on any particular point of view. This refusal of the press to serve as that Fourth Estate is not only to the detriment of the people, but also to themselves. Print media has collapsed. Calls to defund RTE are growing across the board. Voices outside the establishment on both sides of the aisle are developing new outlets which will be the mainstays of the future, with the current media outlets only to exist in the history books of the future.