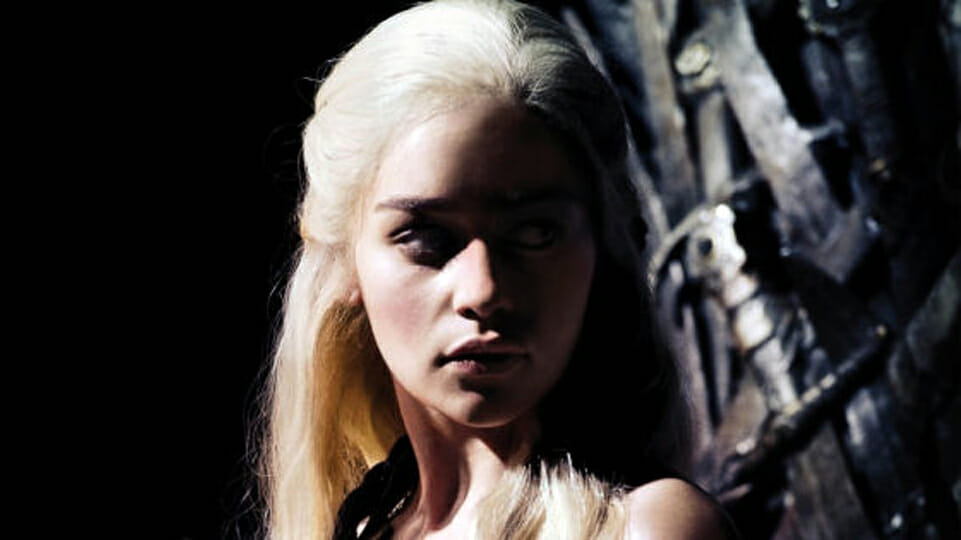 WARNING: The following contains content of a violent and sexual nature.

Many critics abandoned the show over the brutal and often graphic sexual violence inflicted on female characters long before the finale, but the truth is that the Game of Thrones creators let everyone know what their intentions were before the first episode was up. In the very first episode of the show, Emilia Clarke’s character was brutally raped by Jason Momoa’s character, and Clarke has now come forward to discuss how she was exploited on the set of Game of Thrones. Apparently, she told Dax Shepard on the Armchair Expert podcast, she was unaware of the “terrifying” nude scenes that would be expected of her on the show. At the time, she was only 23 years old.

In fact, she says, doing nude scenes was so awful that she drank vodka and cried to get through it, noting that, “Whatever I’m feeling is wrong, I’m gonna cry in the bathroom and then I’m gonna come back and we’re gonna do the scene and it’s gonna be completely fine.” The co-star who played her husband, Jason Momoa, also had a hard time with the scenes, especially considering Clarke’s obvious discomfort with it all. The first rape scene that ran on Game of Thrones, featured on the very first episode, was awful. “He was crying more than I was,” Clarke recalled. When she pushed back on doing nude scenes in later projects, however, the producers tried to strongarm her: “You don’t wanna disappoint your Game of Thrones fans.”

Despite the fact that many Christian commentators and viewers defend the show as acceptable entertainment, the truth is that the nude scenes and the rape scenes were so brutal even the actors and actresses were uncomfortable with them—and producers intentionally made the show as pornographic as possible, even when actresses pushed back (Clarke said eventually her response to demands that she take her clothes off was “F*** you.”) One episode director, Neil Marshall, noted that the producers were constantly pushing for more: “The weirdest part [of directing GOT] was when you have one of the exec producers leaning over your shoulder, going, ‘You can go full frontal, you know. This is television, you can do whatever you want! And do it! I urge you to do it!”

“So I was like, ‘Okay, well, you’re the boss,” Marshall recalled. “This particular exec took me to one side and said, ‘Look, I represent the pervert side of the audience, okay? Everybody else is the serious drama side, [but] I represent the perv side of the audience, and I’m saying I want full frontal nudity in this scene.’ So you go ahead and do it.”

In many ways, Emilia Clarke’s exploitation is not unique. Salma Hayek recently recalled being pushed into a nude scene by Harvey Weinstein that caused her so much distress she took a tranquilizer before shooting it and sobbed until she thought she would vomit. Oscar-winning actress Jennifer Lawrence has described how young, aspiring actresses are told to strip, line up, and then examined for physical attractiveness and sex appeal like pieces of meat by producers (one of whom told her that the nude photo taken of her should be the inspiration for a diet.) But despite those stories and many, many more reveal about a predatory industry, most of them pale in comparison to what was done to create Game of Thrones.

The promotion of Game of Thrones by mainstream conservative commentators from Ben Shapiro to David French has always genuinely bewildered me. We now know that Clarke felt traumatized by the brutal scenes she was asked to do, and used alcohol to cope with the demands. We also know that she and her co-star sobbed as they grappled with the rape scene they shot for the very first episode. But before we knew that, we already knew that the show was filled with graphic sexual violence, explicit promiscuity, and pornographic content that perversely infused savage violence with sexuality.

As Paul Bois noted: “Religious conservatives are an interesting lot. One minute we rail against the entertainment industry for debasing ‘Christian values,’ the next we whore those values out by consuming whatever piece of Godless trash they shove in our face.” Godless trash indeed. Matthew Walther over at The Week described the moment he realized how poisonous the show was:

My goodness. I’ve just spent an hour watching to see if a guy who raped a teenage girl at bow-and-arrow point is going to be eaten alive by the animals he has spent the last few seasons subjecting to forms of cruelty that make Michael Vick look like a PETA ambassador or beaten to death in the freezing cold by his victim’s half-brother. Thank goodness the guy who set his terminally ill daughter on fire in a pyromantic oblation to a heathen god at the behest of a witch who never seems to wear any clothes is not around to prevent justice from being carried out here — the woman whose size makes her the frequent butt of bestiality-related jokes killed him just in time! Lucky that she has a wealthy and well-connected benefactor in a one-armed knight whose hobbies from childhood on have included killing people and sleeping with his queen sister — including in a church right next to the corpse of one of their unacknowledged sons — to whom we were first introduced when he pushed the little brother of the above-mentioned rape victim out of a window to conceal his incest from her drunken prostitute-addicted domestic-abuser husband! Almighty God has made me in His own image and endowed me with faculties of reason and sense perception and given me free will so that I can tune in next week to see whether the unidextrous dueling champ’s royal sister sets her daughter-in-law and the rest of her extended family on fire or just a bunch of priests.