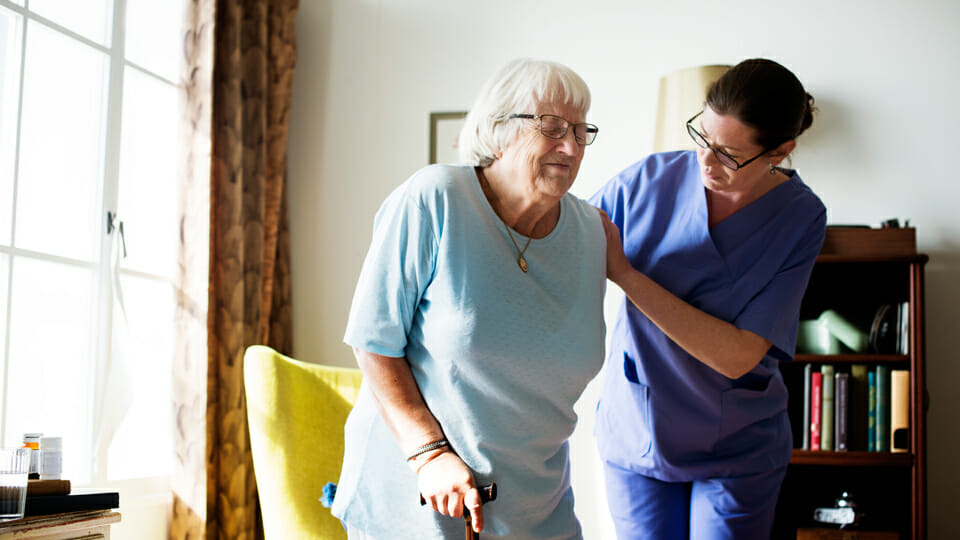 As of 17th April, 302 people have died from the virus in community care settings, which is 62% of all Covid-19 deaths, with 253 of those in nursing homes. Each day, we read on the news about how many cases and deaths there have been, how the curve is flattening, and whether we can ease restrictions in the general population. Hidden beneath the headlines is the reality that more than 50% of the covid-19 deaths have occurred in nursing homes, facilities that should have been a priority, given they hold the most vulnerable to the coronavirus, they would act like a petri-dish in the event of a case, but also that they could have been cocooned to protect the vulnerable much earlier before they became an issue.

In the last few days there has been a flurry of activity to address the crisis as the coronavirus causes devastation to the elderly across the country. A series of measures have been announced – some of them previously and restated as new – to understand and address the spread of covid-19 in nursing homes.

A census of mortality across all long-term residential care facilities, that covers all deaths from Covid-19 and all non-Covid-19 deaths since 1 January, began on 17th of April. It is not clear the objective of this at the current time aside from gathering information on what has happened. It is unlikely to contribute to resolving the crisis.

The National Public Health Emergency Team (NPHET) also intends to test all staff and residents in residential facilities for the virus over the next seven to ten days.  This of course is necessary and should have been prioritised a long time ago, once it became clear that there were growing numbers of clusters occurring in care homes across the country. Why it has taken so long one can only guess, but the absence of a credible opposition, and the lack of a sitting government, has demonstrated what can happen when there is no democratic accountability to demand the government do better.

The failure of the opposition and the fourth estate in this regard is something that will require more than just personal reflection.

On March 10th, RTE reported that “Department of Health has said that general visiting restrictions that some hospitals & nursing homes have introduced, should be lifted. The National Public Health Emergency Team has not recommended these.” Nursing home clusters were an issue in other countries (South Korea announced clusters on February 24th. There were warning signs long before the ill-advised DoH advice.

On the same day as the DoH made its announcement, GRIPT editor John McGuirk called this ‘madness’ bluntly stating “You don’t have to be an expert to know that that’s about the most stupid thing you’ve ever heard. Old and sick people matter. Ignore our idiot Government and stay away from them, for a little while, please.”

As a consequence, many nursing homes who made the prudential decision to restrict visitors were pushed into a position where they felt they had to reopen. Some sensibly refused to.  Some of them received messages about their ‘negativity’ and ‘over-reaction’ – an accusation also levelled against GRIPT for asking hard questions of the government.

The reporting of the situation in the mainstream media continues to sound like a mere parroting of the updates being provided by the government, focusing on talking about what the government announces, with an absence of rigour and analysis.
The opposition we hear have said that ‘the government should have done more, sooner’. There has been little in the form of content about what should have been, and there was little said until recent days where it became impossible to ignore the situation as independent voices and concerned citizens amplified the crisis that was unfolding.

Even today (18th April) HIQA, the body responsible for registering, monitoring and inspecting nursing homes, announced it will also publish a regulatory framework this week that nursing homes must adhere to.  HIQA inspectors will be assessing how prepared the provider and the nursing home is in the event of an outbreak of Covid 19. RTE reports that ‘All registered providers of nursing home care will have to assess their own service, including their capacity to respond to an outbreak while maintaining the care and welfare of all residents, identify deficits in their contingency plans and take action to remedy these deficits.  They will also have to assess the sustainability of providing quality care to residents if there is an outbreak.  Their assessments will be validated by inspectors.”

Do neither HIQA nor RTE realise that the horse has truly bolted on this?

There have been 335 outbreaks of coronavirus in residential care settings, the HSE has confirmed. There are 196 nursing homes included in these clusters. This means Covid-19 has infected approximately 30% of all nursing homes in Ireland. Many of these homes are experiencing difficulties coping with the disease. Is an additional regulatory framework to assess preparedness what is needed right now? More bureaucracy and red tape? More inspectors? Where is the assistance? Where is the extra cash? Where is the PPE? Where has it all been up to now? The house is on fire and HIQA are preparing for the fire safety certificate.

And yet, the absolute bizarreness of this announcement at the current time, goes quietly unstated. The presentation of the framework, tone deaf to the developments of the previous 40 days and the role of the Dept of Health in this, would not be out of place in George Orwell’s 1984. Reality is ignored. It this appears as an attempt by HIQA and the Dept of Health to project blame on nursing homes for lack of preparedness in the current situation, deflecting from where the wider systemic failures. To paraphrase: to have a number of clusters is unfortunate, to have a few more may be carelessness, but to watch the numbers of clusters increase and do so little looks like malign negligence. People are dying every day. A preparedness plan should not be the coup de grâce right now.

Luke Peter Silke provides a useful timeline to the nursing home situation on his own webpage:

“You will also note that requests, by Nursing Homes Ireland, for a meeting with the Health Minister, were ignored on both the 19th and 25th March. That on the 30th March 2020 the Minister instructed the National Public Health Emergency Team to “examine the issues in nursing homes”. The following day the DOH announced they would seek “to identify measures to help nursing homes”. On April 4th they announced the measures that they had just spent six days thinking about. These measures included that the HSE would give PPE to nursing homes, and that a financial support scheme was being set up – it would be ready, they said, ‘in the coming days’. On April 6th, two days later, the exact same measures were re-announced.”

On the same day, 4th April, the Department of Health announced a Financial Support Scheme for Nursing Homes “in the coming days”. On 16th April, Deputy Dr Cathal Berry told the Health Minister that the Financial Support Package allocated to nursing homes had not been paid out, “not a single red cent” and that a mechanism has not even been set up for it.

On the 17th of April, it was announced there were clusters in 196 nursing homes across the country. The increase did not happen unbeknownst. Every few days the number of clusters in nursing homes increased and very little was done by official Ireland to address this. On the 2nd of April, the Irish Examiner reports: “One nursing home has seen almost 100 of its staff and residents tested positive for the Covid-19 virus, the Dáil has heard.” 70 of the 200 staff had tested positive as had 19 of the 100 residents.

That was more than two weeks ago.

HSE Chief Clinical Officer Dr Colm Henry was asked if action should have been taken earlier in regard to nursing homes: “Time will tell,” he said, describing nursing home settings as a “huge challenge, with healthcare workers moving between patients and congregations of older, frailer people.” There are so many questions to be answered that it is safe to say that time has already told.

The announced regulatory framework, designed to ensure nursing homes are prepared, even though two thirds of them are already fire-fighting, seems to ignore the obvious questions of how so many nursing homes have become infected and not just focus on how to manage the infection once it occurs. Maybe there is an assumption that all the infections have occurred from visitors carrying the virus into the homes and infecting relatives, who further infect those but it seems unlikely that this would be the case in all clusters.

It is as likely, if not more likely, that that there has been a failure of systems beyond the absence of a preparedness in nursing homes. Does HIQA or the National Public Health Emergency Team (NPHET) know what the transmission routes of infection into nursing homes has been? Do they know in which case it has been from visitors? Do they know if it has spread from healthcare workers? Has there been cross-transmission between nursing homes, and from nursing homes to hospitals or vice-versa? Has the DoH or HIQA put the necessary safeguards in place to avoid such issues? Are they looking at this? Are they doing contact tracing for cases that occur in nursing homes to try to understand how it got into each nursing home?

The initial decision of the government on the 10th of March to re-open nursing homes to visitors will be remembered as a dark moment. But it is not to lay the blame solely at their feet or at the Department of Health. The pulling on of the ‘green jersey’ by too many in the face of the outbreak, feeling that it was not the time to question in the face of a looming pandemic, has shown the failures of groupthink. As everyone adopted the mantra to ‘stay home, stay safe’ and submitted to the expectation to support and endorse the official policy, it was forgotten how to discern between good and bad policy in the heat of battle. An abdication of responsibility to question and examine, to hold accountable, may be the greater failure.

It feels as if this were any other demographic this would be a national scandal. Is there a subconscious feeling that those consigned to nursing homes are already on the way out? It is sad, but it, sure it was imminent anyway? I ask myself whether I hold those feelings too. We are more animated about 2km radii than sunbathing in parks. As of 17th April, 302 people have died from the virus in community care settings, which is 62% of all Covid-19 deaths, with 253 of those in nursing homes. Those statistics should not be a footnote. They should be the headline.