Sometimes it’s in moments of triumph that a person’s real character is revealed. For some Democrats in the US, vengeance is always the first item on the agenda. McCarthyism had nothing on these people and their new definition of un-American activities.

First up, of course, was Democratic Congresswoman, Alexandria Ocasio-Cortez, one of a host of well-heeled political operatives who’ve styled themselves the ‘resistance’ under Donald Trump’s administration, as if they were plucky heroes hiding in ditches in France circa 1941, instead of powerful media darlings who’ve been wailing for four years solid because they lost an election.

Ocasio-Cortez called for an archive of Trump supporters who might try to “deny their complicity” in the future.

Is anyone archiving these Trump sycophants for when they try to downplay or deny their complicity in the future? I foresee decent probability of many deleted Tweets, writings, photos in the future

Trump is polling at 71 million votes so far, so that archive might take a while. Why anyone in a democracy or a free country should ever feel the need to hide their voting choice is a question that only intolerant liberals can answer.

In case anyone was unclear about the intentions of these archives, Washington Post writer, Jennifer Rubin spelled out what she had in mind.

Any R now promoting rejection of an election or calling to not to follow the will of voters or making baseless allegations of fraud should never serve in office, join a corporate board, find a faculty position or be accepted into "polite" society. We have a list.

Anyone with an opinion she didn’t like on the election should “never serve in office, join a corporate board, find a faculty position or be accepted into “polite” society,” she wrote.

“Never.” What a spiteful, petulant twat. The gulags were full because of this kind of nasty vindictiveness.

“We have a list,” she warned. She’s checking it twice, and she’s not prepared to be one bit nice, because (checks notes) you might have been monstrous enough to support someone who won the last election in a free and fair vote.

“We should keep and publish a list of everyone who assists Trump’s frivolous and dangerous attacks on the election. Name and shame forever,” he tweeted. No free speech then in the land of the free and the home of the brave.

We should keep and publish a list of everyone who assists Trump’s frivolous and dangerous attacks on the election. Name and shame forever.

What a hero. So #stunning and #brave.

A former staffer of Barack Obama’s, Michael Simons linked people to something called the Trump Accountability project which was going to ‘hold Trump supporters accountable’ and seemed to be supported by lots of Democrat staffers. 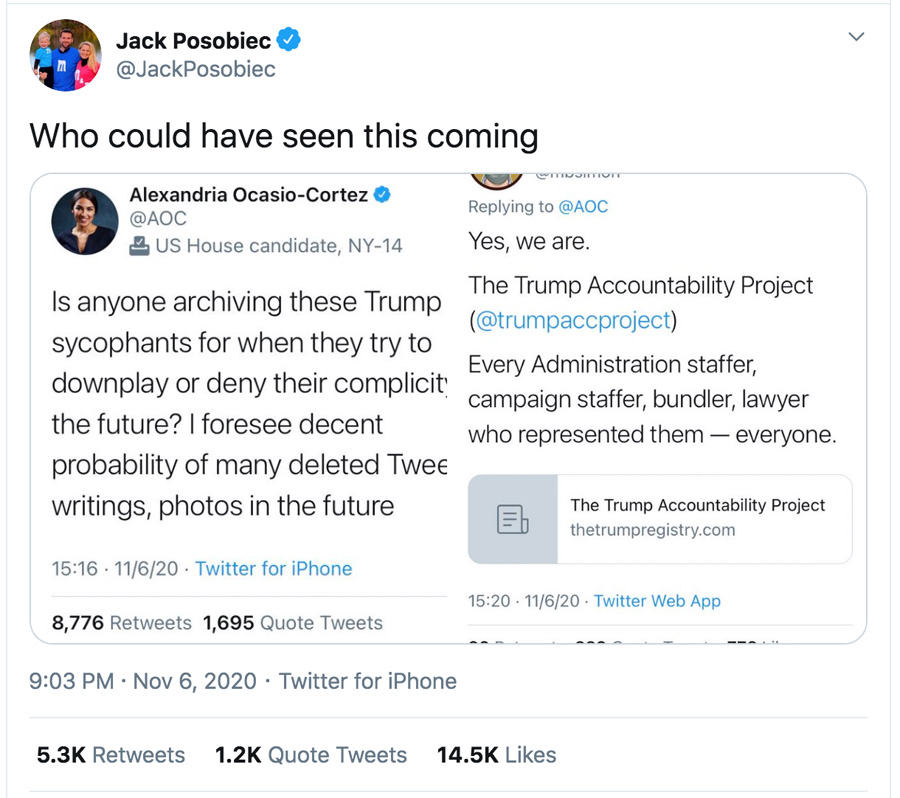 One lawyer had a closer look at the site and saw that the platform had already made a list which included donors and even judges.

But after I started tweeting about it, they took off two of the tabs from their list: the "Appointees" tab and the "Donors" tab, which had the list of judges and campaign donors. See 👇 pic.twitter.com/T7gepaeYzz

After she started tweeting about it, the Trump Accountability project made the lists private.

Naturally, there was considerable blowback to these threats, with more than one commentator reminding the supposed liberals that a hallmark of authoritarian regimes from both left and right was the compilation of political hit-lists of people to punish and cast out.

Are you literally making lists? I understand you’re an ignorant nitwit who’s never had a passing acquaintance with a history book, but political lists are EXACTLY what Communists do: Lenin, Stalin, Pol Pot, Castro. So put me at the top of your list, you moron. I’d be honored. https://t.co/vQzmjwBRMe

I hate to say this because I detest bringing this particular reference into any argument but … this time it's appropriate.

The National Socialist German Workers Party had lists too. They even did exactly what you are proposing with their lists. Imagine that.

Let's make a list of anyone interested in small government, lower taxes & starting fewer wars in the Middle East. Also people pro-free speech, against identity politics & for equality of opportunity. Basically anyone right of Stalin. Let's build some Gulags too, to house them.

Matt Walsh, however, laughed off the notion of the Democrat ‘enemies’ list.

Nobody’s scared of you Alexandria

All this ‘lists of enemies’ stuff and sheer vindictiveness seemed to be at odds with the Great Healing that Joe Biden has been talking about.  “Let’s give each other a chance. It’s time to put away the harsh rhetoric — to lower the temperature, to see each other again, to listen to each other again. To make progress, we must stop treating our opponents as our enemy,” he said.

He might have a word with the Red Guard in his own party, unless all the peace and harmony stuff is strictly for the cameras.

Another actress, another point of view on Harvey Weinstein