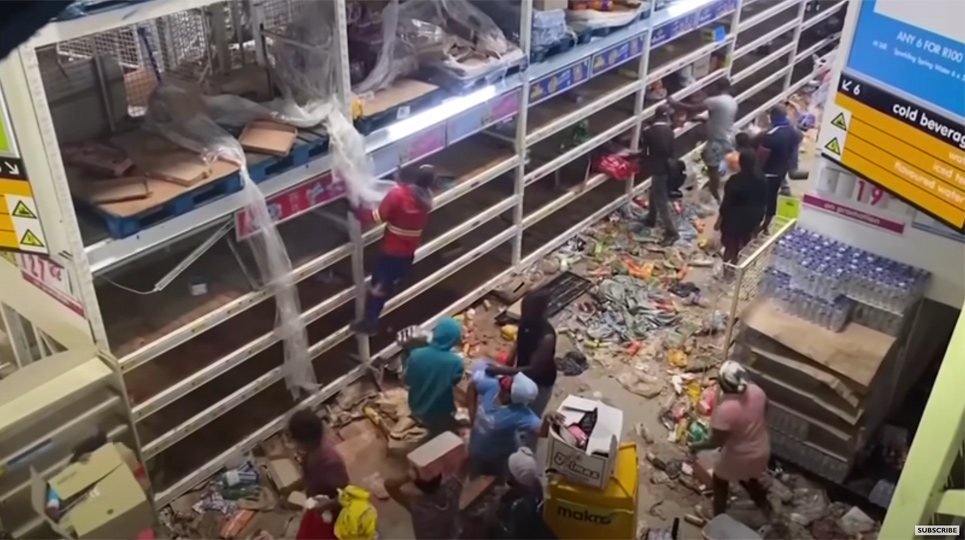 Looting at a shopping centre Photo Credit: screengrab from a BBC news report via Youtube

Some this week were attempting to perhaps distract attention from what is currently taking place in South Africa with reminders that in July 1984 Dunnes Stores workers in Henry Street, Dublin began a three year long strike in opposition to the stocking of food produce from South Africa.

It was indeed a brave stance to take as a mark of opposition to the system of Apartheid then in force in South Africa. The legal distinction between races to the detriment of one or other is an affront to the values that underlie western civilization.

The old regime was peacefully replaced in 1994 when the African National Congress won the general elections that year, and set about framing a new Constitution embodying normal democratic rights. It also, with the strong influence within it of the South African Communist Party, pledged itself to ensure that the black population of the country would enjoy greatly enhanced economic and social conditions.

Sad to say, they have not. On any given metric of unemployment, education, health, crime, housing, and even water and sanitation in the township ghettoes, the situation for the majority of South Africans is no better and arguably much worse now than it was over a quarter of a century ago. That is nobody’s fault other than the ANC’s and its inability to properly run a country that has vast material and economic resources. No longer can they attribute that to Apartheid although of course several media pundits here have attempted to.

The immediate cause of the riots, which have already cost dozens of lives and led to rampant looting, arson and assaults, is the downfall of former President and ANC hero Jacob Zuma on corruption charges. Zuma served a long prison sentence on Robben Island with Nelson Mandela and was a member of the Communist Party until 1990.

The SACP, which incidentally has the slogan ‘Put People Before Profit’ on its webpage, has been badly shaken by the Zuma affair and while condemning the violence by Zuma supporters still attempts to blame everything bad on the old days. The violence and looting has spread beyond the Zuma stronghold of Kwa-Zulu Natal where much of the brunt of the mayhem has reportedly been directed against ‘coloured’ South Africans of Indian descent.

The other target of the anarchy unleashed by the ANC feud and the frustrations over the failure of that party to fulfil its basic social and economic commitments has been the white minority. Whites in South Africa have for long been subject to violence of all types and the ANC and Communists have increasingly been tempted to use Mugabe’s destruction of the agricultural sector to deploy the race card against the Boer farmers. White and coloured and settled black communities say they have had to resort to their own resources to protect themselves against mobs.

The other factions within the ANC have no claim to the moral high ground when it comes to corruption. The current President of South African Cyril Ramaphosa, a socialist who has never worked a single day in his life outside of politics – which is perhaps why certain former and now wealthy revolutionaries in this country admire him so much – is one of the richest people in South Africa.

Sinn Féin of course stands in support of its current friends in the Ramaphosa faction and ludicrously claims that the ANC is “beginning to cast off the shadow of institutionalised corruption at the highest levels” – something it has always denied has existed prior to Zuma’s downfall.

It does acknowledge that the disturbances are largely a cover for criminality, just as they were in the United States last year, and that it supports the Tripartite Alliance in pursuing the “path to progress and recovery for all.” The Tripartite Alliance incidentally is the ANC, Communist Party and COSATU. And of course in common with Sinn Féin’s own claim back in the late 1990s regarding Irish unity, it is one hell of a long road, and no nearer its end now than it was when the ANC and Sinn Féin began to wet their beaks.

Others, including members of the extended Mandela family, have similarly benefitted from their position within the new elite. Much of the corruption at higher levels is linked to the former economic elite’s having basically bribed the ANC and SACP and the trade union leadership of COSATU with shares and other benefits.

Most of it, however, is the endemic corruption that allows state and party officials, basically the same class, to embezzle vast amounts of public funding that was meant to provide basic public provision. The moral effect of that corruption was evidenced this week by South African policemen openly engaged in looting.

White South African Alan Paton wrote a famous novel in 1948 called Cry, the Beloved Country. While it became a classic of the anti-Apartheid movement, it deals with South Africa before that system was put in place. It addresses, in curiously biblical terms, the flaws of both the whites blighted by feelings of racial superiority, but also the disintegration of black society into crime.

It is sad that the ending of the ossification of race-based governance followed by the current crisis of a deeply corrupt and incompetent leftist regime seems to expose the fundamental human flaws that are not amenable to any magical feat of social engineering. Those flaws that are the real theme of Paton’s book, and of humanity itself.

Making monkeys out of us