Covid-19: People are protesting because they are sick of being ignored and silenced 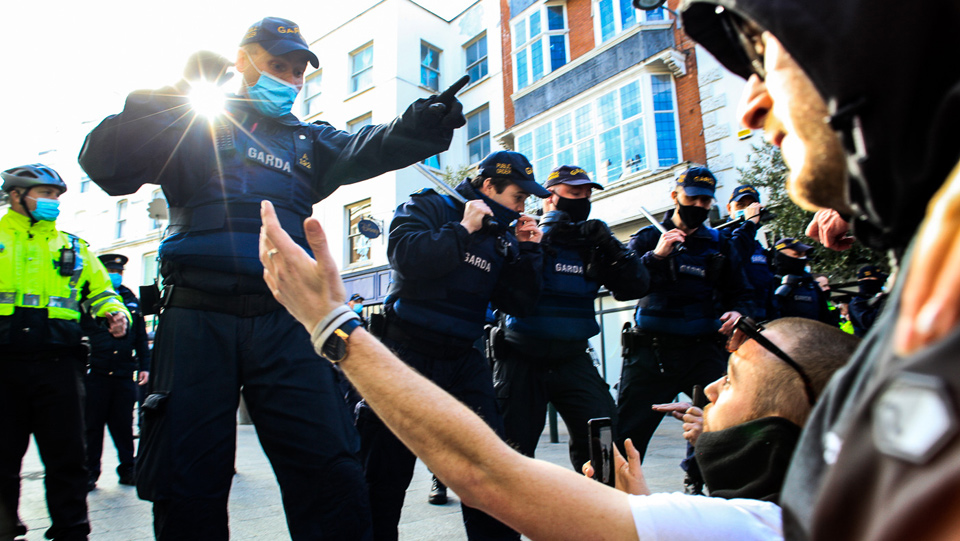 Gardai and protesters at the anti-lockdown protest in Dublin on 27th February 2021 Photo Credit: Krzysztof M

If you don’t agree with the protestors in Dublin city centre on Saturday, that’s fine. I am not sure I do myself. Or I haven’t really engaged with what they are protesting about to understand what aspects of ‘lockdown’ are being protested. However, I understand why many felt the need to protest and the right to peaceful assembly is an enshrined human right, in the Universal Declaration of Human Rights, and for 98% of those protesting, this is what they were doing.

A human right is universal and inalienable. It is for everyone and cannot be taken away. A pandemic creates a problem in this regard, no doubt, as that right clashes with the aims of managing a pandemic. For this reason alone, it puts increased onus on the authorities to facilitate and enable the means for alternative means of questioning government policy. Instead, the Government has doubled down on its unwillingness to dialogue.

For the last 12 months we have been ruled (not governed) by a government that no longer dialogues. There is no opposition – except for the Rural Independents and Aontú – in Dáil Éireann who are interested in providing any form of opposition and these voices are too few to be heard by the nature of how the Oireachtas operates.

In the pre-election debates, the loose alliance of Rural Independents and Aontú were denied a platform to participate by various media outlets. Sinn Fein, the largest party in the Oireachtas has largely disappeared, and their various interjections to date ought to earn them a similar nickname as Keir Starmer of the UK Labour Party – Captain Hindsight.

No doubt they are waiting in the long grass to strategically pick up the fall-out of the pandemic, the lockdowns and the failures of government policies once the patience of the public wears thin and the time to payback the public purse arrives. But for the present moment, when they are needed, they are absent.

Many of the discontented are Sinn Fein voters who, if they think about it a little over the next few months, will realise that Sinn Fein is not stepping up to support their interests out of political expediency. They want people to suffer economically so they can benefit later. Either that or they simply support the Government positions are no different at all.

So, if you have no voice and if no one is listening to you as your life and livelihood are being crushed, what options are there but to take to the streets and protest?

It is not as if the Irish mainstream media has displayed any interest in engaging a contrarian perspective when it comes to dissent from the approved establishment direction. No dissenters are given any credibility – they are portrayed as cranks, conspiracy theorists and labelled as right-wing lumpen-protestariat no matter what their political conviction.

Fergus Finlay betrayed what many within the establishment are thinking by asking – no doubt rhetorically – how many protesters were on the PUP. The insinuation being that they were benefiting from free money and how dare they complain – let them eat cake, he may as well have said. He was not able to fathom that they are being justly compensating for the loss of earnings, for the loss of jobs, for the destruction of businesses that have come from government policy that has protected the jobs of the likes of Fergus Finlay.

As Matt Treacy pointed out previously, he may as well have called the protestors a basket of deplorables. The same sneer could be sensed when Leo Varadkar attempted to label the protest as a riot in order to de-legitimise it. The ruling class does not want to dialogue with those that they disagree with. The fourth estate – the commentariat – does not want to dissent from the ruling class. The five-minute video introduction on Prime Time on Tuesday (2nd March) was indicative of the lack of interest and willingness to talk to real people – instead filling the time with commentary of people who observe the cranks on the street. Why talk to real people when there are people out there to tell you what they are and what they think.

Fianna Fail and Fine Gael going into government together has provided the stability the establishment needed which was inevitable as they had become one and the same over the last few years. Unfortunately for one – or both, their combined strength is little more than that of one or other of them a few years ago and will continue to dwindle. However, the current marriage of convenience insulates one of them from the inconvenience of having to pretend to be an opposition.

The former Governor of Mountjoy Prison, John Lonergan, talked about the need to treat people – prisoners – with respect and not to humiliate them – to treat people as people. For the Government through the pandemic it seems that those most affected by the lockdown have become non-persons; non-citizens that they are not accountable to and who they do not need to engage in robust civic discourse.

Opposing voices have a habit of being silenced. Doctors who disagree with Government policy are not allowed to say it. Barristers who disagree are removed from government panels. The Index of Banned Books is replaced by the index of banned thoughts. It may as well be the Inquisition. Cancel culture has never been more present and it is not limited to the cultural and social sphere – it seems to be supported by government policy, by social media as well as the mainstream media.

I don’t know whether Dr Marcus De Brun or Dr Delores Cahill are right or wrong about anything but their public excoriation for taking a public position at odds with official Ireland leaves a horrible taste in the mouth, as does the Counsel for the State in the Court of Appeals debasing his role by describing as ‘Bermuda Triangle stuff’ the submission of John Waters and Gemma O’Doherty. Whether true or not, that is not the expected language or dismissive attitude expected of such a role.

It is the official cancelling of voices that drives the necessity for protest. People are not just suffering from lockdown fatigue, they are drained by the silence from their governors. They are not being treated with respect and when they raise their voices they are essentially being humiliated – called cranks, extremists, crypto-fascists or far-right. They are accused of simplifying a complex scenario yet their grievances are dismissed with disparaging labels. The echoes are not far from the treatment of Brexiteers a few years back and look how that ended up.

We are distracted with enquiries into the past but no official investigation into an ongoing scandal that can be addressed in the here and now is permitted.

There is silence about why wearing of masks was not advised – was in fact ill-advised – by the Government and WHO only a few months ago, and now anyone who shares those views is a social pariah and barred from all shops. There is silence when asked why something becomes government dogma where once the advice was the opposite. The position changes 180 degrees yet the Government remains infallible.

There is silence about why Leo could meet his mates for a beer in the park last summer but the faithful could not stand, socially distanced, at the funeral of their nearest and dearest. There is silence about why we can mill around shops all day every day but cannot stand still in a spacious Church to fulfil our Sunday obligations nor stand on an embankment in the fresh air to watch our children play sport.

There is silence about why the Government and the Gardai attempted to create the impression that ‘advice’ was in fact the law.

The inevitable wall of silence is exacerbated when politicians hide behind an unelected NPHET and accept the advice of an advisory body as policy under the guise of ‘following the science’ without addressing wider societal implications. It is made worse when contrary viewpoints are silenced by the accusations of ‘grandma killing’ and putting jobs before people. The failure to engage in any substantive discussion and to dismiss substantive questions as quackery only contributes to the bubbling unrest.

Driving dissent underground does only that. The policy of restricting funerals to ten people forces people who wish to fulfil the human need of consolation to do so clandestinely indoors with the inevitable spread of a virus that would not have occurred at a well-managed outdoor event. In the same way not subjecting policy and opposition to robust civic discourse drives dissent indoors where it spreads and different grievances will coalesce and merge.

Delegitimising grievances that may have drifted away in the fresh air of public debate can become deeply embedded, fester and morph into something else. But if the grievances are genuine, then the Government should have nothing to fear from them.

In the film ‘I Care a Lot’, when a vulnerable woman was placed under guardianship of Rosamund Pike, her colleague claimed ‘I would fight’ against such an outcome. Pike responds:  ‘You think, but at heart most of us are weak, compliant and scared’. That may be the case for most of us in a pandemic – and it is not a negative thing at the right time – but that will only last for so long.

Official Ireland may comfort itself by conflating and labelling these mixed groups as some basket of deplorables, but Official Ireland is doing nothing more than pushing middle-Ireland to the fringes. Persisting with this will continue until the fringes become the centre.

BEN SCALLAN: Was Ireland lied to about abortion?