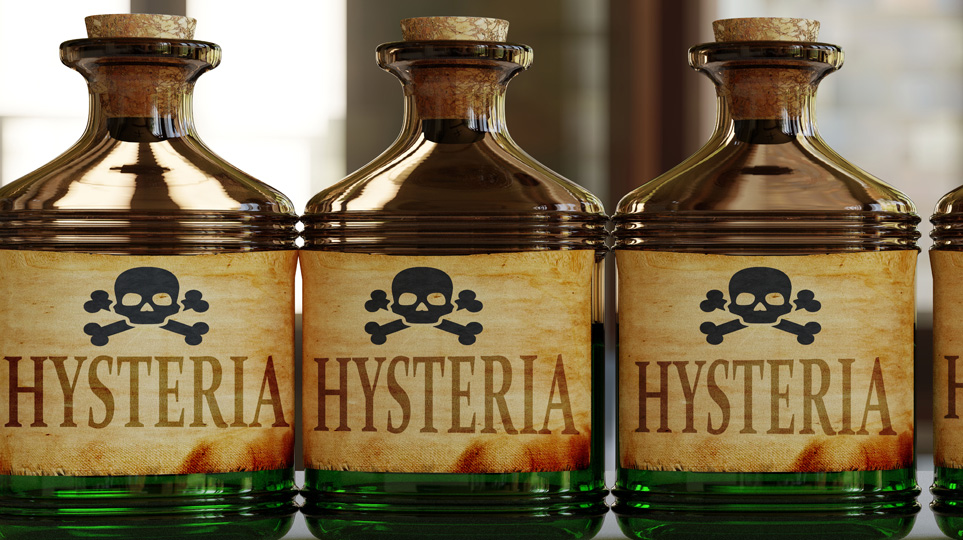 Listening to Health Service Executive Paul Reid dismiss the report by the Health Protection Surveillance Centre regarding the infinitesimal risk of Covid 19 transmission through outdoor activities reminded me of John Prine’s paean to doom.

Prine sang that scientists,were “bastards in their white lab coats, who experiment with mountain goats”. There’s no suggestion that Mr Reid has any associations with such goats, but he does seem to exude a fixation with bad news that he has in common with almost every scientist or public health representative allowed on Irish media.

Reid seemed to be claiming that the HPSC report was inaccurate or misleading and threw in some curve balls about how you couldn’t separate actual transmissions through sports from the said participants being in changing rooms together, or having to use vehicular transport to get to said scenes of danger. There be monsters, I tells ye!

Which of course manages to completely avoid the fact, the actual fact, that the survivors of the killing fields of the GAA, soccer, rugby and athletic courses around the country during the brief interregnum between our successive Lockdowns, were either not using changing rooms – or if they were – managed to escape such Black Holes of Calcutta virus free.

There is little point in going over all the arguments in support of allowing outdoor activities. As far as many people are concerned they speak for themselves, and the statistics back that up. Then again, probably most of us are secret card carrying members of the Flat Earth Society and swear they had a pint with Sasquatch in the Auld Triangle on Dorset Street. (With no offence to any former patron bearing a resemblance to Big Foot. Or to Big Foot if he has broadband in Washington state.)
The ongoing efforts of scientists to frighten the bejaysus out of the punters also reminded me of another time when men in white lab coats also believed that they had a mandate to tell everyone else what to do.

In Rebecca West’s seminal study of collaborators, The Meaning of Treason, revised in 1964, she examines that phenomenon with reference to the “atom spies” who had convinced themselves that they were serving the interests of humanity by providing Stalin with the means to create a Soviet nuclear capacity.

She had also written of William Joyce, ‘Lord Haw Haw’, the Nazi broadcaster and pointed out that far from being polar opposites as the left would still have you believe, traitors such as Joyce and the Communist physicist Alan Nunn May “had been on the same side in 1939 and 1940 when the Stalin – Hitler pact was signed and put an end to the pretence that there is any real difference between fascism and communism.”

The superior attitude of the Communist nuclear spies, whose motivations are still mythologised today in the American left’s veneration of the Rosenbergs and Alger Hiss, was based on “an unsound assumption that the man who possesses a special gift will possess also a universal wisdom that will enable him, in fact, to know other people’s business better than they do themselves.”

Anyone who has read the Zero Covid leaks here will recognise a similar delusion and arrogance on the part of certain medical professionals and their fan girls and fan boys who clearly regard their role as manipulating the public for their own policy objectives through fear and the character assassination of professionals who hold contrary opinions. All in the interests of science of course. And all for your own good, it is needless to say.

What the Covid hysteria has proven again is that in the midst of crisis, science can cease to be a neutral reference point and instead assume the role of a tool to be used by those who hold power to force other people to do what they want them to do.
West was writing about a period from the late 1930s through the 1950s when science had been the handmaiden of horror under the Nazis and Communists. Nazism had been defeated but even in the late 1950s there were western leftists who upheld the absurdities of Stalinist “science.” Supporters of Lemaitre’s Big Bang theory which implies an act of creation were murdered or sent to the camps.

The then Communist Irish Workers League, which subsists still on fairy tales of their suppression by “obscurantist Catholic nationalism” supported the claims of the Soviet geneticist Trofim Lysenko that artificially induced changes to mice whose tails were cut off or from laboratory mutations of grain, could be inherited. Thus proving the primacy of nurture over nature as Stalin’s “engineers of the soul.”

Comrade Trofim would surely have prospered now where a significant part of the left not only upholds the biological nonsense that a man can decide to be a woman, but has the power to silence and even sack any person who dissents.
The point of all of this is that where are differences of scientific interpretation at times of crisis, those who hold political power can be the ultimate decision maker, even opting for the fallacies of racialism, eugenics, Lysenkoism, transgenderism and so on, if they are regarded as fit to the prerogatives of power.

Covid 19 is one such time of crisis. Some argue that its threat is greatly exaggerated, and that the measures adopted are in many cases not only excessive but ineffective. Given the recent provenance of the virus, it’s seemingly constantly changing pathology and even disagreements over its origin and future potency, sharp differences on all of these must be expected – yet they are not widely heard.

It has taken medical science quite some time to come to an understanding of lethal threats such as AIDS, malaria, Ebola and others, but none have been eradicated. So the claims that we can attain Zero Covid are at the very least open to interrogation, particularly given that an acceptance in whole or part of that objective will mean that humanity is facing a long period of restrictions on what were considered basic rights. Unenumerated in many cases, because no one in open societies ever believed that some of those rights including to practise one’s religion or to engage in unsupervised outdoor activities would be so severely delimited as they are now.

West’s astuteness in understanding the attraction of overweening state control for a certain type of personality and its correlation with leftist political ideology, is also pertinent to our time. As she wrote back then, the comfort blanket of the all-pervasive, all knowing state for the likes of the Rosenbergs, Klaus Fuchs and others was that it “offers a haven to the infantilist.”

The infantilist fears individual autonomy and craves state control of as much of human life as is possible. Even their embrace of what are the most extreme narcissistic expressions of individualism are inextricably bound to their insistence that the state enforces that by elevating a psychiatric disorder into a totem of that ideology. The cult of the personality around the Communist despots from Lenin to Xi has become the veneration of deviancy of a different type.

The extent to which many western countries have been colonised by that ideology has been highlighted by the Covid panic. Even where the left does not hold political power, its statism is the dominant influence on what are nominally parties of the social democratic centre left or the Christian democratic centre right. And if their march through the institutions directly part of the state is insufficient the left controls for the greater part the burgeoning “Non Governmental Organisations” which in the Irish state now account for in the region of €6 billion of public spending and which in 2020 employed 165,000 people.
Covid and the opportunity for enlarging the power of the state, and their own power through the public service, state funded media and NGOs is a godsend to the statist left. We recently looked at a webinar where the restrictions are seen not as they are by the vast majority of people as an imposition – even if they support them – but by the likes of Sinn Féin and other left parties as a model for the future.

These people don’t care about anyone who has to exist outside of their statist bubble; other than they are dependents and voting fodder. They barely conceal their contempt when talking about small businesses and the self-employed when hectoring the current government to introduce even more restrictions, and to maintain them even after the virus crisis ends, assuming that it ever does.

And they keep this up under the pretence that they are in some imagined sense “rebels” or even “revolutionaries.” As Rebecca West wrote of their ideological antecedents of the 1940s, the state cosseted left were “able to continue the pretence that they were rebels by ascribing a rebellious quality to actions which were, in fact, the pink of conformity.”

As for the “bastards in their white lab coats,” some of them would do well to heed the parting advice of John Prine, to “leave the Universe alone, its not their business, not their home.”

Children with Down Syndrome were cared for in ancient Ireland