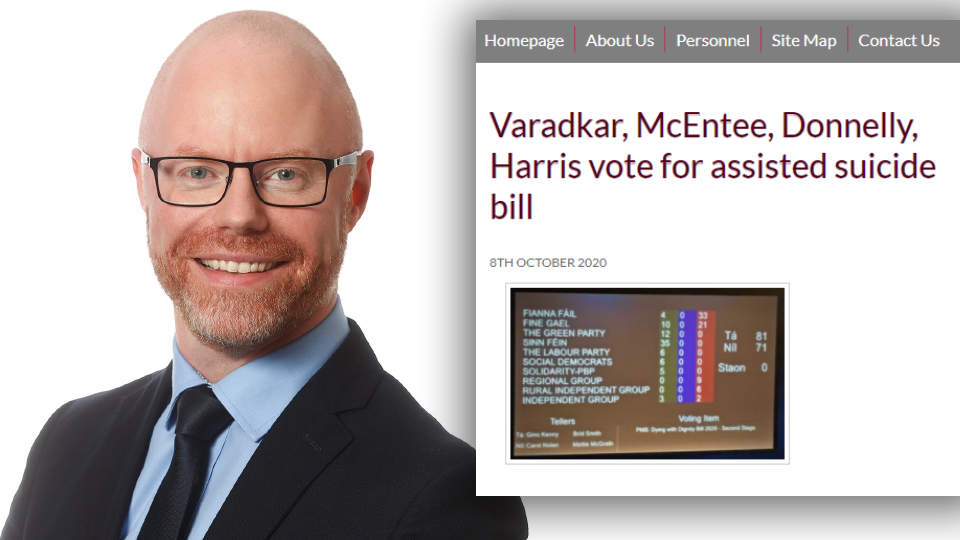 The Minister for Health, Stephen Donnelly, did not have any “meetings or discussions” with the medical experts who wrote to him opposing assisted suicide, before he voted in favour of Gino Kenny’s bill seeking to make the procedure legal last month.

Doctors have come out strongly against the Assisted Suicide Bill, and made submssions to TDs and Ministers asking them to look at the evidence and to listen to the palliative care specialists who provide end of life care in Ireland.

However, in a response to Independent TD Carol Nolan, Minister Donnelly admitted that while “representations from individuals and groups, including those involved in the palliative care area, in relation to this Bill have been received by my Department,” before the vote on the Bill took place “no meetings or discussions have been held”.

Both the Irish Palliative Medicine Consultants’ Association (IPMCA) and the Royal College of Physicians in Ireland wrote to all TDs strongly opposing the Bill which would make it legal for doctors to end the lives of people who have been diagnosed with a terminal illness. Under the terms of the Bill, the patient need not be at the end of his or her life, and a psychiatric evaluation is not required before a life is ended by assisted suicide.

The IPMCA said that Dying with Dignity is already present in healthcare in Ireland and that no change to our current laws is required.

“Most people do not know that the easing of physical, psychological or spiritual distress and addressing people’s fears, hopes, sadness and loss can transform the experiences of living, dying and bereavement for individual patients and their families,” they said.

The Royal College of Physicians in Ireland also told TDs it was opposed to legalising Assisted Suicide.

It had “brought together representatives from a range of medical specialities within RCPI, including Geriatric Medicine, Neurology, Palliative Medicine, Respiratory Medicine, Rehabilitation Medicine, and Psychiatry, to review the matter of Assisted Suicide. The group reviewed arguments on both sides of the debate and examined international evidence from jurisdictions where assisted suicide had been introduced. The group also looked at the positions of medical professional bodies throughout the world on this issue,” before reaching that conclusion, they said.

While media reporting has focused on politicians’ campaigns for euthanasia medical experts who care for people at the end of their lives have come out strongly against assisted suicide.

Niamh Uí Bhriain of the Life Institute said that it was “appalling” that Minister Donnelly had not bothered to meet with medical experts before voting in favour of the Assisted Suicide Bill.

“This is the Minister for Health, yet he has failed to inform himself about a crucially important issue before voting on it. It is appalling that he would not meet with the medical experts before voting to endanger the sick, the elderly, the disabled and some of the most vulnerable in society,” she said.

The Bill is now gone to Committee stage, and Minister Donnelly says it will be examined and expert evidence heard then. “I would anticipate that there will be full engagement with an extensive and diverse range of stakeholders during the Committee scrutiny process in respect of such an issue of the utmost complexity, sensitivity and importance,” he told Deputy Nolan

Twice as many vaccinated in Northern Ireland than Republic