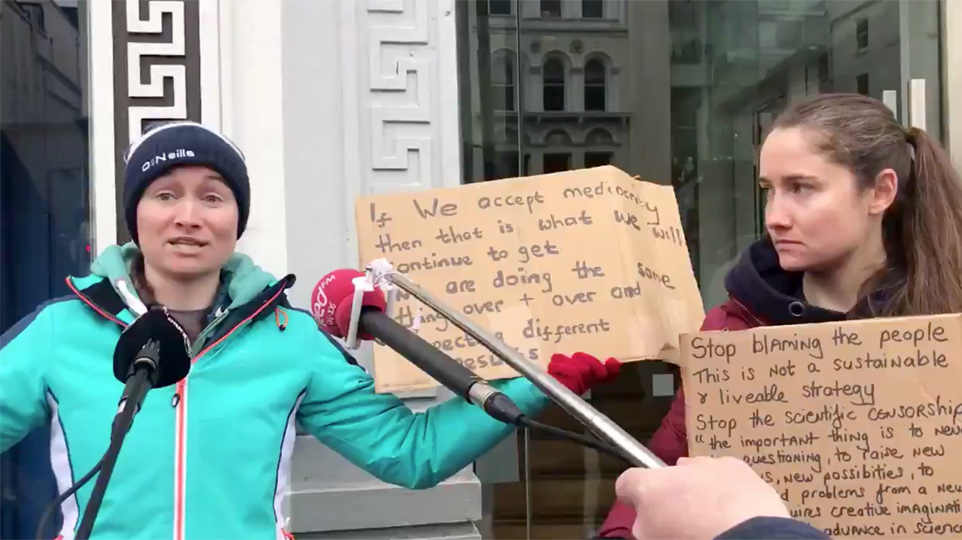 Two Cork camogie stars who took part in Saturday’s protest in the city centre against the continued Covid-19 restrictions have said that people with other illnesses are “collateral damage” in the lockdown being imposed by the government.

Cork camogie players Katrina and Pamela Mackey told Red FM that the lockdown had gone on for twelve months and that people – especially those with mental health needs or in need of screening or medical treatment were now “collateral damage” and that this was “not acceptable”.

“Last year, it was fine for a few weeks to be locked down, but twelve months later what actually has changed?” she asked. “Nothing has changed, we’re just collateral damage at this stage, how its affecting mental illnesses, other illnesses, screenings etc. We cannot continue to ignore that. It’s not acceptable,” Katrina told the station.

Katrina later posted on Twitter that she was “happy to attend the protest today in Cork. A great turnout contrary to what will be reported in MSM. There was a mixture of young, middle aged and elderly people each there because they’ve had enough. I want better. Ignoring the massive collateral damage is no longer acceptable,” she said.

Happy to attend the protest today in Cork. A great turnout contrary to what will be reported in MSM. There was a mixture of young, middle aged and elderly people each there because they've had enough. I want better. Ignoring the massive collateral damage is no longer acceptable. pic.twitter.com/mJSVAmJo2B

“I’m a young, fit, healthy individual,” one sign read. “Am I going to receive the vaccine over a malnourished, deprived child in a 3rd world country?”.

“Lockdowns must be balanced against the impact on the psychological health of the population,” another read. “Purpose and meaning are the basis of human existence. Closing down businesses, closing churches, no sport, takes this away from people.”

The People’s Convention said that 2,000 people attended the assembly on Cork’s Patrick Street on Saturday and called for an end to the lockdown and that the public health service needed to fully open again. They also said that the right of people to work was protected under the Constitution. Diarmuid Ó Cadhla said that Ireland’s lockdown was the longest in Europe and that the country had taken on a debt of €50 billion due to the ongoing restrictions. “The people will have to pay this debt,” he said, “how and why and when we are not being told and if we try to discuss it we are somehow being labelled as terrorists or madhatters of some kind. We are not that,” he said.